Everyone had a couple of glasses of something fruity and fizzy at the British Rock And Pop Awards, including Smash Hits girl-about-town, Bev Hillier, having a night off from producing Nightsout. After the awards had been handed out, Bev bumped into Boy George (left) and then bullied a whole galaxy of stars into having a snap taken for the Hillier family album. Included in the crowd (above): The Belle Stars, Bananarama, Kim Wilde, Geoff Deane, Dave Lee Travis, Mark Fox and Chris Quinten (Coronation Street's Brian Tilsley), as well as assorted Daily Mirror Rock And Pop Club members. Barry, meanwhile, was lurking outside. 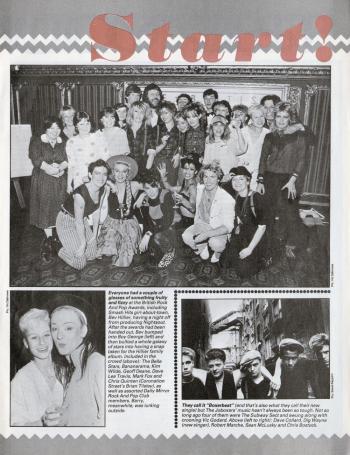