Warm ahead! Blonde on blonde

Collect Bardot's photos. The pirates of Blondie. Going to Marilyn Monroe's grave (Westwood Blvd, LA) for the twentieth anniversary of her death. See his own birthday coincide with that of the death of Jane Mansfield in the scrap of his Lincoln Continental ...
Loving blondes is an addiction. Not just a preference, but an allegiance to a myth as flashy as that of rock 'n' roll. I am ready to exchange an original by Chuck Berry for a signed photo of Jean Harlow, and all my disco for having met the gaze of Veronica Lake! That's my thing: Love Blonde. So meet the Caroll Baker of rock eighties, the delicious Kim Wilde, think if I was moved! And intrigued, because the fragile pin-up of today's pop always seemed to defend herself from her blondness, which she embodied so essential.

When I turned the corner of avenue Kléber, she wisely posed in front of the entrance to the metro, in black leather and a matching mini dress. The October sun scattered gold glitter in her hair, she was Kim Wilde, as in the pictures, pretty and a little painful. Her tights were spun, and she was tugging on her dress, which was too short, as if this ridiculous gesture could hide the ladders that climbed her leg.
A little later, with new tights, we sat side by side in a soft sofa. The nylon crunched happily when she crossed and uncrossed her thighs, I could not guess the name of her perfume, but it suited her, we talked about blondes, and other things, and she reminded me of this poem of Prevert: "I am as I am / I am made like that / I am made to please / and can not change anything".

Kim Wilde: "I don't think you should exaggerate things, even the simplest things; a lot of people put too much emphasis on something, and they lose their sense of the essential. When Dad came show me the text of "Love Blonde", I yelled! I didn't want to add to the fact that I'm blonde, I found it uncomfortable, because it's obvious to everyone that I'm blonde, like it’s obvious to many people that I’m a sex symbol, even if I didn’t look for it, and SINGING THAT, I didn’t think it was a good thing to do.
It was my first reaction, and then the other side of my personality woke up: I said to myself stop taking you seriously! What is that blonde hair  anyway, I was born with it. I found myself in a balance: do it or not? And then I liked the song, finally, I sang it, but it was a difficult decision to make.
It was a good thing, because I started to be a little pompous in this image which is mine, and 'Love Blonde' turns this image a little to the joke, I laugh at the blonde preciousness that I represented by putting precisely finger on it. I reaffirm myself as someone who does not take himself seriously. But I admit that I did not always feel very comfortable in this story. And then the black leather dress! It is great, because it is black leather, but finally I am happy to remove it after a TV! "Love Blonde" is more for Hollywood blondes than for me, I have always admired them, I love Monroe, they were more "delicious blonde" than I can be. "
- "I like rock 'n' roll, I grew up in it. I also like R&B, soul, but rock artists have always been the greatest. Every second of my life has been marked by rock, I love its roots, country, George Jones, Hank Williams. Today, it's a spirit rather than music; for many people, I don't have to represent rock 'n' roll, however, this is what is closest to me, I have PRIDE in rock 'n' roll "
- "Fashion is so boring, I don't feel at all connected to these fashion groups, it's so hollow. Sometimes I want to dress up for a night, but I quickly come back to my leather. "

- "I like to talk. The problem is that most journalists want to know who I go out with and what shampoo I use, these stupid questions. What annoys me is the attitude of these people who think they’re doing me a favor talking to me because I’m concerned with teen magazines as well as rock magazines, so the latter are a little condescending to me. This morning I had this guy try to check that I was as stupid as blondes are supposed to be; it was the feeling that I listened to his questions and the language he used to speak to me. He had preconceived ideas and I was disarmed by this stupidity, so I gave the stupid answers he was waiting for, because I didn't know what to do in this situation.
I became more tolerant, I learned patience. But I really like to talk, all the people who rock like to talk about them, this is the subject that interests them the most, since it is an opportunity to tell his passion. And then there are many things that are clarified by the mere fact of talking about it. In your head, it mixes a little: what you hear, what you feel, the image you present, all that is expressed in words when you talk about it, and it is better defined for you, it is like writing things black on white, it has more impact. "
- "I don't read the newspapers too much, because it is information which, most of the time, is worthless because it undergoes distortions. It interests me to know what is happening in the world , but I can't profess that I know what's going on in the world! I care about it anyway. There are few constructive things that can do it. I don't understand well, I'm having trouble to assimilate to the world, my head is a little cloudy, why don't all these people just go and buy some good rock records? "
- "We always work in close collaboration with Dad and Ricky, they don't try to exclude me, I'm too independent to force myself to impose things that I wouldn't accept. We each have our ideas and we combine them Nothing in these three albums happened by accident. The best we can do of all three is still to come. I haven't written a song myself yet, but I have to try. We have a studio at home now, it will give me the opportunity to get started. "
- "My hero, right now, is De Niro: I just saw" Deer Hunter ". I was never hooked up by James Dean, but I must confess that I was hooked up by Marilyn Monroe. I I'm not obsessed with someone, I don't have pictures on my walls. When I was a kid, I had Gary Glitter and Elton John's pictures. I never worshiped a hero, maybe because my dad was one himself, and I lived too close to him to grasp that dimension. It made me realize that there are no heroes. says they adored him when they were young, but for me, it's dad, it's Marty! Quite simply.
My father cleansed me of the cult of heroes, I don't think they exist. He talks to me about the fifties, it was very innocent, exciting, the beginning of something, like falling in love the first time, that was the beginning of rock 'n' roll. Many people have died, my father was one of the few who was lucky. He never sat in an armchair and said to me gravely: "Kim, be careful, the day will come or glory will be behind you!" He knows that I have the intelligence not to fall into the larks' mirror. He does not regret the time of his glory, he had such a wonderful life. He should write his biography, he met such extraordinary people, he shared lodges with Eddie Cochran, Gene Vincent, Billy Fury ... Most of them are dead, or dying! The business has changed, it was much more adventurous at the time.
Me, success has not changed me, I do not think about money and all that, I am unable to say how many records I sold, how many gold records, these are not important things for me. What I can tell you is how many albums I have in my record collection, I have priorities. I feel the same as before, I do the same things. I am lucky to have kept my friends. This business has a reputation for being perfect for losing friends, husbands, wives, children, relationships, etc. It's just a story of loss of people.
Me, I always see the people I have always known, they have jobs that have nothing to do with rock, and I realize that in fact, success made me become humble! So I better be arrogant a few times." 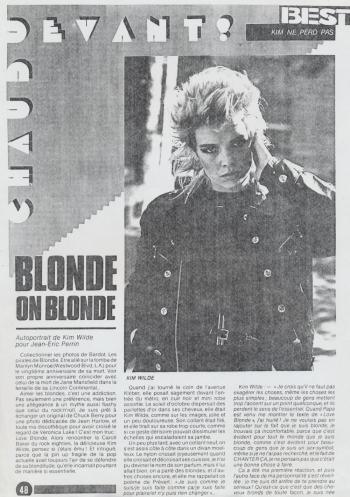 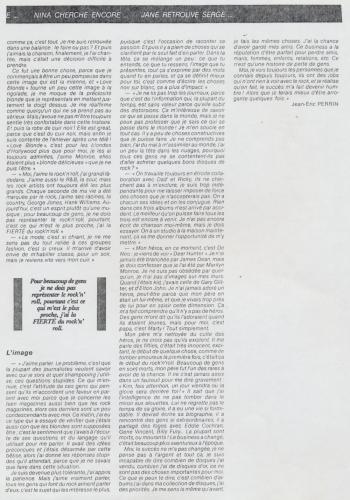