The stage in London's Hammersmith palais is wrapped in mysterious twilight, during which Soft Cell and their monotonous synth sound is warming up the crazed fans. Suddenly from the back of the stage a up-whipping saxophone solo: the big white spotlight is pointed towards a big, slim figure, who has used lots of cream to put his dark hair behind his ears. During this evening the eyes of Gary Barnacle, which is the name of this person, are focused on the audience.
Just outside of the artists entrance a wellknown blonde head is nodding towards him. Kim Wilde had secretly come, unnoticed by fans, to see her Gary in action. She uses every free minute to be with him.
But most of the time Kim is currently spending in the studio with hot ears, to work on songs on her new LP together with father Marty and brother Ricky, from which two are going to be released as sigles. However the release date at the beginning of May is retarding. This is why the live dates of Kim's Germany tour will also be postponed to the end of May.
In her rare time off Kim is building furniture and interior decorations in Jugenstil for her appartment in St. Johns Wood. She has also bought a black Yamaha piano. She is also learning to play the saxophone from her boyfriend (!). In England, Kim was in the limelight despite being absent from the charts: in front of superstars like Paul McCartney and Michael Jackson she got the top prize: she was chosen the best new singer of 1982. During the Royal Children's Variety Show she was allowed to shake hands with Prince Margaret.
Privately Kim sticks to her habits: she does her daily yoga exercises, cycles a lot and eats vegetarian, to stay fit for the coming tour in Germany, Japan and Australia.
Late at night she sits in front of the television, to see videos of her tour around England. She wants to improve lots of things.
Kim wants to go to America this year to: "They know who I am and they want to see me live." With Gary on her side Kim is now taking all hurdles without problems... 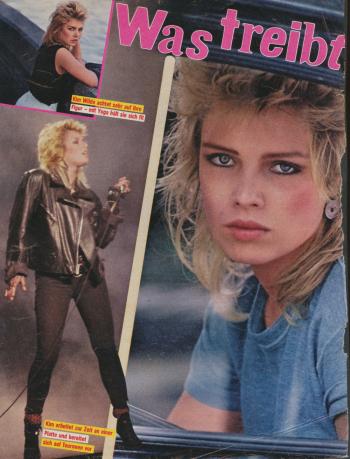 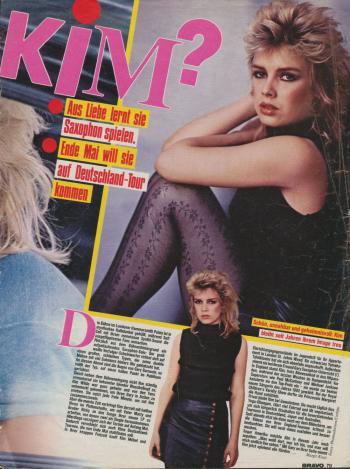