Kim Wilde has quite an unusual background - even for a pop star! When Kim was growing up, her father, Marty, was already a very successful pop star, but for a long time it didn't really make much difference to Kim and her brother Ricky.

"When I was about seven we moved from living in London to a village in Hertfordshire", said Kim, "and that was much more important. I went to the village school there till I was eleven. It was lovely and I had a very happy time there, mostly because we had a fantastic headmaster. I made a lot of friend there. In fact to this day my best friend is a girl called Clare Smith, whom I met at that time."

Even at school, it was obvious music was in Kim's blood."I was very involved in art and music. They used to do musical plays, especially the Nativity play at Christmas, and I was always keen on those, playing Mary and doing a lot of singing. We used to have a lot of discussions in class and I used to really lap that up, too. I enjoyed things everybody likes, the games you play in the playground and so on. I did enjoy the countryside a lot, too, just going for walks. Then there's horses - I did learn how to ride at one point but I didn't carry it on. To be honest, I think I got a bit frightened once when a horse bolted with me on it! Even before that I was a bit unsure of them. I never enjoyed patting their noses or giving them sugar. I was always worried those great big teeth would take half my fingers off!"

Kim began to take an interest in fashion at quite an early age. "I vividly remember getting my first pair of proper jeans!" Kim laughed. "The fashion was for flares in those days - I suppose I wouldn't be seen dead in them  now - but at the time, when I was about ten, I thought they were fantastic." As she got older she did have a few problems. "I was a bit worried because of who my dad was. In a village everyone knows everything about you and some of the other kids weren't too keen on me having a rich and famous daddy. My friends were all right, of course, but some of the other kids used to use it as a way of getting at me and making me feel an outsider. It wasn't as if he was actually a big star at that point, though he had been, but he was still well known."

She also had to cope with the unusual problem of having her brother, Ricky, becoming a star and having hit records when he was only about twelve!
"I remember he was getting famous and going abroad a lot and I thought I'd quite like it if it was me, but it didn't ruin things between us. He's a year younger than me so although I wasn't jealous of him I did sit around a bit thinking 'Why isn't it all happening to me?' and just hoping that one day my turn would come, too."

And finally, of course, it did! "Kids in America" soared up the charts, and since then everyone's been just "WILDE" about Kim! 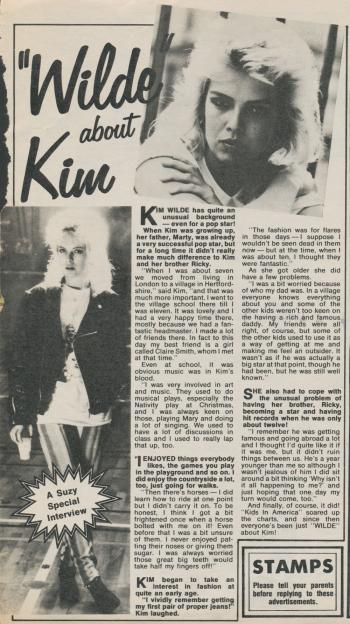