Tony Jasper meets the girl of the moment - Kim Wilde.

Her dream partner will be 'available' and 'considerate', but for the moment, Kim Wilde, alias Kim Smith, born November 18, 1960, an ever burgeoning career is far more attractive. The amusing, perceptive Kim is currently slaying her critics left, right and centre with the success of her single Love Blonde. It is flying high in the charts, as did the recent Bad Day from Carmel. Its success goes against the prevailing hit parade feel with its jazzy air, and it actually allows Kim some scope to show her vocal dexterity. The blue-eyed, blonde - 'not really that colour' - Kim copes admirably.

She says: 'I'm not establishing a new style for myself. We just did this song and in the vein your hear it. I think it sounds fine and I enjoy doing it.'

It follows such hits as Kids in America, Chequered love, Water on glass, Cambodia, View from a bridge and Child come away and with the latter not really doing too well the present chart triumph has come not a minute too soon.

Presently, she's recording a nwe album for early autumn realease and is busying herself for a new nationwide tour. 'I'm really pleased with things these days. I've got a lot more confidence now, more sure of myself and the image I want to project and that's me! I think lots of TV work has helped my success, of course.'

Her extensive work load has had one unhelpful result. Kim tells me: 'I've bought this flat, I've hardly spent any time there. I keep meaning to shop for this and that and never seem to!'

Kim names Mum and Dad plus the Beatles as her major musical influences. Mum was in the popular Vernons Girls of the 1950s while dad Marty, a rock 'n' roller of old times and now making a comeback. Dad had 13 hits between 1958 and 1962.

Also very much involved with Kim is brother Ricky, for he produces her records. Ricky once envisaged a career as a solo artist when he was pushed by Jonathan King as a potential teenage star. 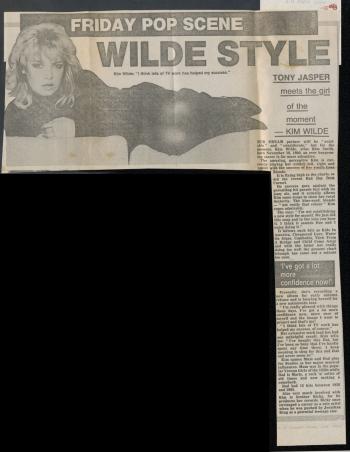