Don't you just hate people who are tall and supple, and look good in the rain? Kim Wilde is just such a person, but she has such a disarming warmth about her that you instantly forgive her for her perfect appearance.
It was a gloriously gloomy day when I met her and a fantastic old jukebox in the foyer of RAK's St John's Wood studios, where they understand essentials like immediate tea and coffee on arrival.
"Have you seen that dreadful picture of Boy George in the Sun?" Kim asks me as we sit down.
Not yet, but I've heard about it, I say.
"It's so unforgivable", she says, shaking her head, "and cruel. Pointlessly cruel. It's impossible to find a tolerable newspaper that's not too big to wrestle with in the morning.
"Come to think of it, anything's too big to wrestle with first thing in the morning, except a cup of tea!"
Quite agree, quite agree, so what have you been doing recently, ms Wilde?
"Well, we've got a new single out called "Dancing in the Dark", and we've been getting this album out and packaged and all that. Then I've been making plans for my European tour, which is going to be very big, and cover countries that I haven't visited before, like Germany.
"We are trying to fit some UK dates on at the end."
Do you have an indication of how you are going to be received in Deutschland?
"Well, erm, going by ticket sales", Kim says hesitantly, "it looks as if I'll be quite good."
So it's 'ah ja, ze gorgeous Keem Veilde' over there then, is it?
Kim giggles.
"Yeah, well, my German success has followed my European success quite closely. France is where I seem to sell consistently well. They've really taken to me in France - I had a million sales with 'Cambodia' there. But most of the European countries have followed the success I've had there"
So when you go over there, it should be quite a sell-out then?
"Well, they've been waiting to see me for a couple of years now, so I think they'll be quite interested to see what I look like!", she grins, and reaches for her mug of tea.

Is the album different to previous stuff? Have you changed much, do you think?
"Well, not drastically!" Kim laughs. "but I think I will do from now on, though. I don't have any definite plans, musically. Most of it's written by Rick and Dad, so the music comes out as how they feel that day," she continues. "Like 'Love Blonde' was sort of swing, but there's nothing else on the album like that."
But you've started taking more of a hand in the songwriting department yourself, now, haven't you?
"I've been 'making plans for Nigel', Kim grins and recrosses her legs (which, I notice, have a rather endearing pair of woolly-lined granny boots zipped onto the feet).
"I feel it's important for any artist in some kind of professional capacity to do their own stuff. Otherwise you'll disappear quite quickly. People would get bored with you.
"Apart from which," she shrugs, "the most important reason why I'm writing more is simply because I want to, but I haven't written any great classics yet!"
"But it's awful, though", she continues, "because when Ricky wrote his first three songs, two of them were hits, and not only that, they were great songs too, so I have incredible 'high-standarditis' about the whole thing.
"As soon as I can come to terms with that, which I am doing now, I think I can come up with something quite good.
"Still, we'll see won't we?" Kim smiles.

Does it cause you anguised sleepless nights that little boys dribble over pictures of you? I mean, are you a Kate Bush, Anna Ford, "Love me, love my mind" type?
"Oh no, it doesn't bother me at all!" Kim giggles. "I've got no objections to little boys, I think they're rather sweet. I mean", she coughs and wrinkles her nose, "I've never tried to be taken seriously. It happens or it doesn't. It's like trying to fall in love with someone - it's impossible."
Do you feel you've sometimes been discredited and dismissed because of being Marty Wilde's youngling? How do you react to accusations of nepotism?
"Well," Kim shrugs, "you make your bed and lie in it, don't you? I can't say, 'It's not fair, it's not fair!', cos I know life isn't fair. I just make the most of it instead of going against it.
"Anyway, it depends if people want you around. You could be the most talentless bum in the world, but if people want you around, then you're winning!"
So in what direction would you like to see your career going from now on, then?
"Well, I like making good records," Kim grins. "I can't really imagine doing anything else!" 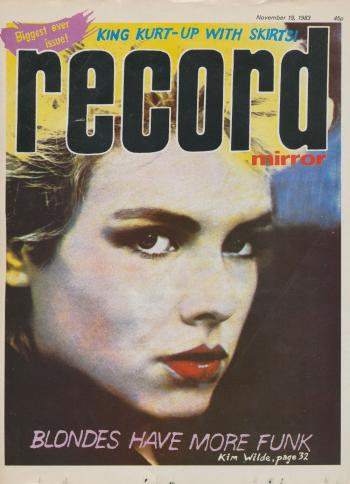 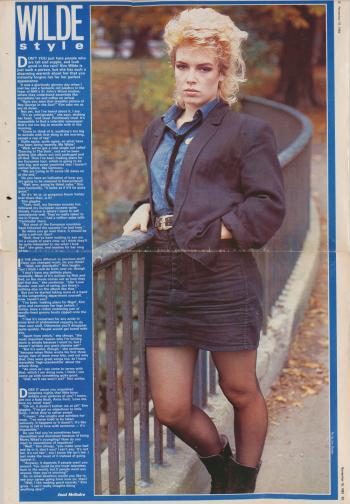