Kim Wilde has a problem - despite hit records all over the world, she doesn't know if she's famous or not!
"As a band we've always done what we felt was right at the time", she explained. "We put out the singles we liked though we didn't know if they'd be hits or not - like 'Cambodia' which we tought was a lovely song but didn't go down too well here. It sold in other countries, though, including a million in France and that sort of thing is very confusing! It's sometimes hard to keep track of how well you're doing in different places until you actually go there. For instance, I had no idea I was so popular in Denmark until somebody told me I'd sold more records there than Queen and I was rated alongside Simon and Garfunkel!"

"People knowing who you are always comes as a surprise, anyway. I know I'm in the papers and on TV and so on but unless people constantly tell you you're famous, you don't think anything of it. I certainly never assume I'm going to go on tour and pack the theatres out. I don't really know if people will be out there or not! I don't think I'll ever take that sort of thing for granted."

"I must admit I'm not very good at detaching myself from things, so I hardly ever get away and forget all about my music. But I do go on holiday once a year. I like to get together with some friends and go skiing. On shorter breaks, like weekends, I spend time as simply as possible - I might go out to a concert if there's a band I want to see or just sit about at home with friends."

"Reading is my favourite hobby. It's the best escape of all because in a few seconds you can be in any world and any time you choose. I think books are a really nice gift, too - if you find a book and you know someone who really appreciates a good read then it's one of the loveliest gifts you can give anyone."

One of the things she does have to think about, of course, whether she's on tour or on holiday, is her appearance and, surprisingly, she's really quite casual about things like her hair!

"I do the lightening and the cutting myself, unless I can't get at the back, then I get a friend to do it for me. The style's sort of hit and miss, really, like the colour. I just look at it now and then and snip bits off here and there! Then I do the colouring, in fact, I never know what shade of blonde I'm going to be next! I first dyed my hair blonde while I was at art college about three years ago. A lot of people were doing strange things with their hair and I'd always fancied going black but I didn't think it would really suit me so I tried blonde instead. Originally I had it done at a hairdresser's and it cost about fifteen quid. They completely bleached it and I came out looking like a sun ray! There weren't even any dark roots, I was blonde right down to the scalp and I must've looked horrific but I thought it was great!"

"I decided that I wasn't prepared to pay that much every time, though, so I started buying the lightener nyself. The amazing thing is that it seems to stay in good condition, and I don't look after it as much as I should. I do sometimes put a conditioner on it but not very often, yet it still feels quite silky when I wash it."

"Another thing a lot of people ask me about is my jewellery. They think because I'm a pop star I'll be dripping with diamonds but that couldn't be further from the truth. In fact, I do have a chain but I keep it in my bag most of the time because I find it quite annoying to wear. I don't even wear a watch, nut then I don't like keeping time."

"I do like earrings, though most of the ones I have are quite small. I've got a couple of Japanese coin ones I'm fond of, and I like to make my own as well. There is one little thing I really like. It's a tiny little painted doll on some coloured cord that pins on like a brooch. A fan sent it to me and I wear it a lot."

"I like wearing things like that, things that've been given to me by someone who cares. I believe they bring me lots of luck!"

With looks and talent like yours, Kim, who needs luck! 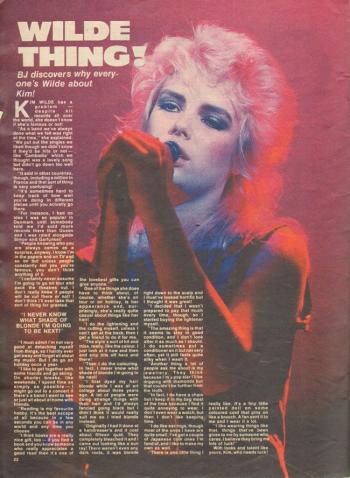