Kim Wilde, the baby rock star from the other side of the Channel, is a pure product of the generation clip. Her image is inseparable from her voice, and it is the look that generated the spark. She did - exclusively for Video 7 - a video introspection.

Legend has it that it is sometimes difficult to be the child of a famous person especially if one wants the same career. For Kim Wilde, the teenage rocker, that does not seem to be the case. Her daddy, her name is Marty Wilde and he had his hour of glory as a rocker in the England of the avant-beatles. And naturally he became the manager, producer and composer of his blonde child. Think! How can we resist, when we are a good father, this urgent request: "I want to sing rock", even though we have given the example successfully? Naturally, and barely out of adolescence, Kim Wilde will offer, under the protecting wing of daddy Marty, to the teenagers of whom she will immediately become the muse. For it is true that she has something! A 'leader of the pack' from the 50's. Sulky pout, fleshy lips, big blue eyes, arrogant bust. It is enough to make all the butchery of the banlieux drool, but also the sanciens for whom she symbolizes the seduction of the woman-child. As the voice retains a tender freshness years, she likes the languorous poses of the savage at rest and the pout is sometimes sulky, it could only inspire the videoclips producers. As much as the quality of the songs, these "rocked" romances concocted by the father, as much as the minaudés, is the clipped image that made Kim Wilde, one of the great Anglo-Saxon stars for which France, Especially, has taken hold of love.

She arrived for this morning appointment as we imagine: sexy little English but wise in her jacket curved schoolgirl. The lip is very red, and the blue eyes are huge. Not a star for two pennies, she stretched her photos, like a beginnte that sie to attract the attention of an impresario. This is because she does not usually take care of her own promotion and all the stewardship that this entails. Besides Daddy Marty, Ricky the Big Brother is there as a musician, and it's Mom who rules the whole at the head of the company Big M.

She loves France, because France loves her: "I think the French have always appreciated sweet girls like Sylvie Vartan, Sheila or Françoise Hardy. I'm like the new Petula Clark. " And it is true it recognizes it, the videoclip helped to impose its image: "It has a considerable power and even if I do not really adore the shootings, it offers a more very effective, that of" Kids in America " Has started the song all over the world, which is the one I prefer, and we're now in the sixth. "Love Blonde was staged for a TV show. Most were shot by Millaney and Grant. I take very little part in the choice of subject, of history, because I do not think it is fundamental. What the public expects is you, your presence to the maximum of your seduction. When I watch 'Beat it' or 'Billie Jean', I can not wait to see Michael Jackson appear, see him move, dance. So in my clips, I decided to show off my sex appeal.
For example in 'Love blnode', I had this sexy black dress and I thought it changed from the usual rocker uniform. That's why I do not like the clip of 'Cambodia'. It is too commonplace. Like most of those that can be seen on TV. A succession of cliches. The only one that breaks with that, and that I find fabulous, is the 'Rock it' by Herbie Hancock.
Kim Wilde says it all: "I'm not a TV addict". Understand by that, the hours in front of the small screen, very little for it. First there is the studio, then the tours, the rest for the friends. Dreams of cinema? "I do not really have to, but I have to continue my career as a singer, and then I'm used to living all the time under the flashes of flashes, the looks that watch you on all the seams without wanting to add. I have never played comedy, so I do not know if I'm made for it, but I can tell you that I'm working on a TV show project for Channel 4. My show, Guests, people I like, as different as John Lydon or Julie London ... here is someone I really admire! A regular program where we can sing in duet, unusual musical encounters. "

"I do not live with them, I only see them to work, they take charge at the end of the day. My brother Ricky is a wonderful guitarist and my father knows how to find new ideas for each new album. "
She willingly admits that she was lucky, but with a lot of frankness considered that it is deserved. And then, there is this physique of a doll of flesh, this seduction a vulgar hair that ignites the heart and the senses of millions of aloscents in the world. And that the video clips amplify again. Does not a magnificent image risk masquerading the song and, ultimately, will the clip only sell one physical, one image? "I do not think so. Even if the record managers think more and more about the look of the bands, the song will always be the main argument."

For her latest album 'Catch as catch can' the Wilde family has evolved the sound, more synthetic less teen rock, and changed the look of the cover by calling the famous graphic designer Malcolm Garrett: "It is a normal evolution to Both in music and in my physical appearance, the more sophisticated, and the next album we are recording will confirm this change a little more."

It is that now, after France, Japan, to conquer the USA or a single title has reached the top 50 in the hit parades. And in addition to touring, it is the same evidence, the next clip is fundamental. MTV, the channel that broadcasts the 24-hour promotional movie, is part of the strategy of conquering the world's biggest record market. And Kim Wilde does not ignore it. So she thinks of John Landis, the director of the "Blues Brothers" and the "Werewolf of London" and who has just signed the "Thriller" of Michael Jackson. At the same time, the crazy sums that cost these little films are for her "ridiculous". Then she will see! Meanwhile, there is a next visit to France, for a TV show and a little later for the release of the new album, a great concert.

Kim Wilde smiled with her teeth to take leave, raised the collar of her jacket, and disappeared in the flood of passers-by of the lunch-time. The Italian waiters followed her with her eyes. One of them, still all stirred, will launch "You are damn varnished to be buddy with a sword like that!" The charm of Kim the rocker had once again operated. 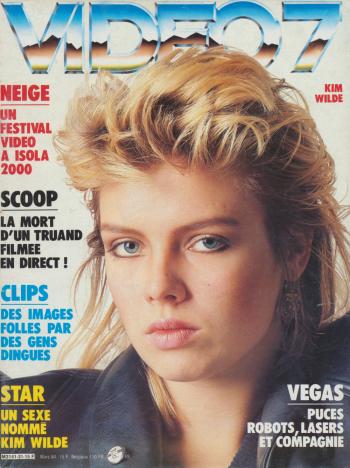 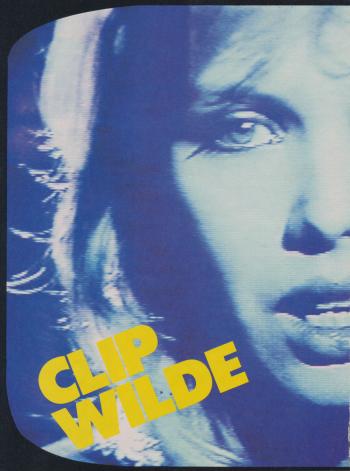 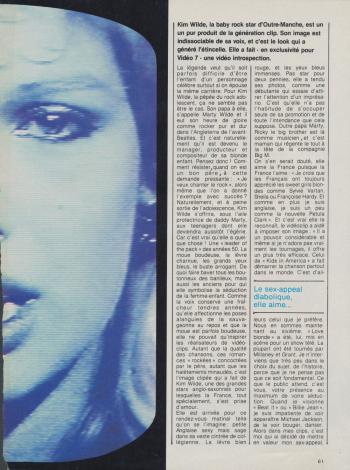 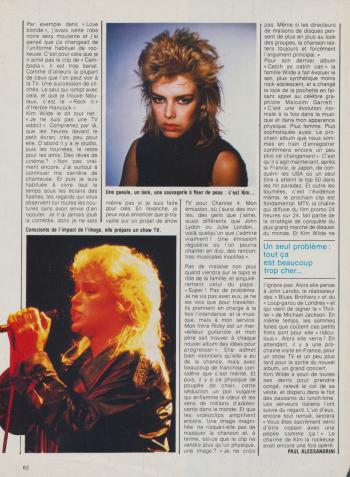 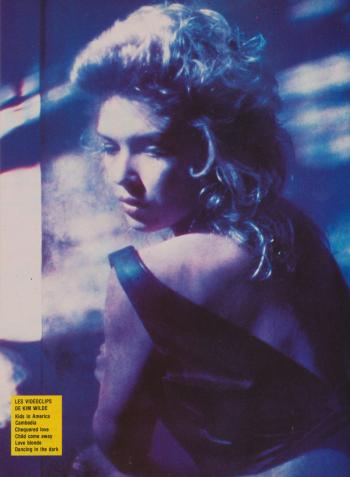 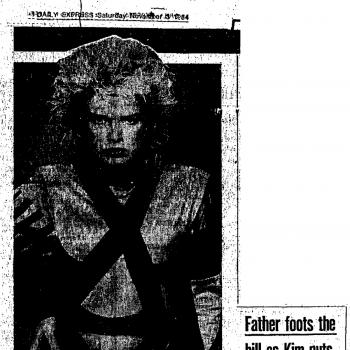