The 'Catch Tour 83', a short European tour of about fifteen dates set up to support the release of the third and wonderful album of the divine Kim Wilde, 'Catch as catch can', passed through Lyon and Paris. Pleasure? But a triumph, of course!

We waited Kim firmly. Good foot good eye. The gates of the Baltard pavilion were as if they were black people: clusters of fans, clinging to metal rods painted like wild berries to country bushes. Dominant color: the black. Black is beautiful (it's rock 'n' roll, it seems). In the lot, an armada of Kims, mini-Kims, to speak frankly, wait for their idol and model, absolute reference: the real Kim. The star.
She is seen arriving in her big English bus, seated according to an old habit next to her mother, a charming woman (her daughter more sober). She shows great signs in stamping, radiant face: but are they addressed to her sighs or to the staff of Pathé-Marconi come to welcome her by great cold this Sunday afternoon in November? Unless it's to one of the roadies, because Kim is an exquisite politeness with her world, from the most notorious boss of her record company to the most insignificant underdog of her team.

'Hello', here, 'all right?' There, the love blonde is lavish of attentions while at a decided step she splits the fresh air of the outskirts of the Marne to win her box in the basement of the metal pavilion: there is just the champagne.
Very good, the champagne, to coax: "Kim, you will take again a cup, finally, a goblet .... well ... I mean, what about two-three small photos, like that, on the thumb, Goblets?" We had seen right. The group returns in the box and melts on the bottle. It's hardly a thimble for every pipe head, all round. Not with that we're gonna fuck the waistcoat buttons. Marty, Kim's dad, walks down the corridors in an elegant camel hair coat. Ricky, the brother and nevertheless composer of almost all the titles of the repertoire, has dyed his hair (the syndrome 'love blonde'?).

Clic clac Kodak, Kim poses flute in hand before demanding the review of the press: difficult to translate to him word for word the fantasies of this plumitif who, in a well-known "specialized" newspaper tells the menu his night of love with her. A few pages later, or before, another had spoken in an interview with the star at the jump of the bed on a subject undoubtedly drawn in the hat top-hat of his red-head: "Cheese and Formerie in Phrance ".
Bad luck had caused the poor scribouillard to fall precisely on this ungrateful subject. And she had also made it for me that came the ungrateful privilege of translating his wording.

This is how the beautiful Kim kills her stage fright before climbing onto the stage. Frightful jojos precede it on the boards while, in her box, Kim perfect her soapy beauty. Among the tubes of lipstick and gilded compacts, a walkman distills "Undercover", the last Rolling Stones. The musicians are now sapped: you, Gary Barnacle, saxophonist and nonetheless lover of Kim, has been replaced. The drummer too: he was recently seen playing for Wham!, a fashionable discopop band in England. Ricky places himself at the sound mixing console, where he supervises. Zappa would call him the "central scrutinizer" if he was in the room. But Zappa is not in the room. There are the Shorts, but everybody knocks them.

A blonde crest harangues the crowds, no, she attacks her set, the devil to the body: but it's Kim, the only object of general resentment! On the left, she drinks her eyes. On the right we drink her eyes. In front too. And behind! We keep on absorbing it. But can she suspect how much? Around her, it makes hairy. Mark Hayward-Chaplin, bass player, you're a good one. The others too. Thanks to you, Kim can afford some bold flights. A little too much, sometimes, but that's another story. Kim, it's Kim. And then his new titles go like a glove, "Love blonde" and "Dancin' in the dark". And also "Stay a while", poignant like everything. No, they would not exchange it for anything in the world, their Kim: they love it. 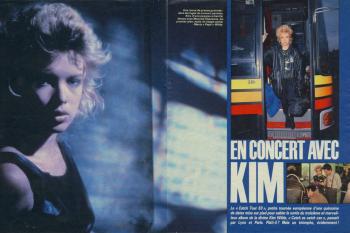 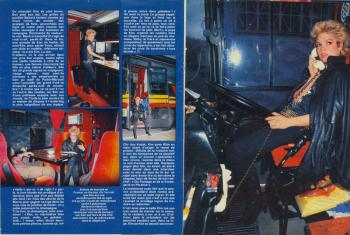 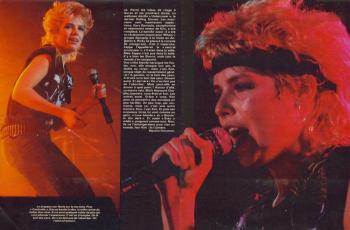 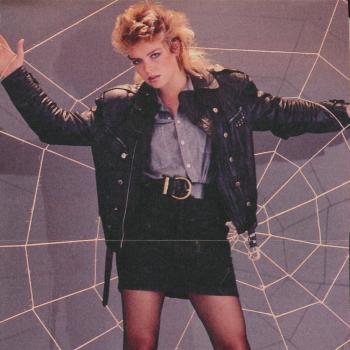