It isn't easy these days to get Kim Wilde to do an interview. The blonde singer works in a modest studio in Knebworth in silence on the new album that should be in shops in a couple of months. We managed to get through to her secret hideaway and to talk with her about past, present and future.

You are obviously at ease here, Kim
Sure. I love this studio. It's nice and quiet and I can be totally myself here. Still I'll be glad when the recordings are done. I long for home.

A lot of your rebellious colleagues talk about the misunderstandings of their parents. That's not happening with you, is it?
Not at all! I have had a very happy childhood. My room in the house of my parents in Hertfordshire is still my shrine. The walls are covered with photographs of my best friends and nice clothes I don't wear anymore.

You have a strange taste when it comes to clothes.
I don't like things that are in fashion. I am irritated by the fact that 95% of female clothes are designed by men who try to convince us that we're not hip if we don't wear their creations. That's why through the years I've gathered together a very personal wardrobe. Usually it's things that normally are being worn by men. That strategy has its disadvantages. Every time I get home after a good search I have to conclude that the stuff is good but doesn't fit together very well.

You always seem selfassured when it comes to your looks. Is that true?
Not really. I'm often in front of a mirror for hours before I go out. That used to be worse when I was younger. I thought I was overweight, saw pimples everywhere and thought that all my friends were prettier than I was. I was too tall for example. I used to be taller than everyone in school. I started walking differently to seem shorter. That didn't look so good. Now I realise it's actually quite good to be a bit taller than the rest. I didn't grow much after I turned thirteen anyway.

Did you have more obsessions like that?
You will probably think it's ridiculous, but I have rather big feet. Shoesize 42 isn't nothing. In the old days people made jokes about it, which cause me to be even more aware of my 'handicap'. Years later it became obvious that such things are irrelevant.

Despite all these things you turned out to be the most desirable female bachelor in English popbusiness. Does it flatter you?
Of course. Still, there have only been three or four men in my life until now. A boyfriend becomes your best support after some time. When it's over you're left feeling helpless and lost. I must confess that I am afraid of a new steady relationship. Besides, being free is also fun.

Do you remember your first boyfriend?
As if it were yesterday. My brother Ricky and me went to school together. I was very popular with the boys and when I was nine I had my first boyfriend. His name was Neil. I won't tell you his last name. Suppose he reads this! I can assure you I was head over heels in love with him.

Do you have a yearning to go back to school days?
Often I do. I feel bad about losing people over time. I still correspond with my old school friends and I go through the old photo albums regularly. I have good memories of that time.

Do you have time for your friends despite your busy schedule?
It gets harder. Every year I take a few weeks holiday and that is the ideal possibility to go out with a couple of friends. Last year four of us drove through France. It was a great adventure.

What's on the programme this year?
Not a holiday, I'm afraid. First this album needs to be finished, in the autumn there's an American tour and then a European tour. I won't get bored anyway. 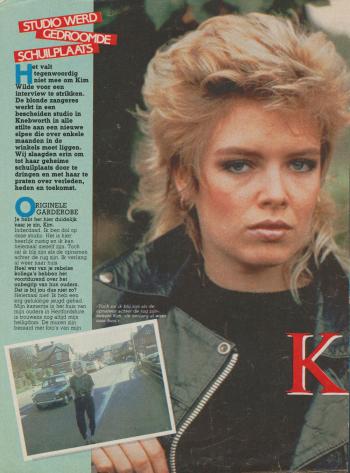 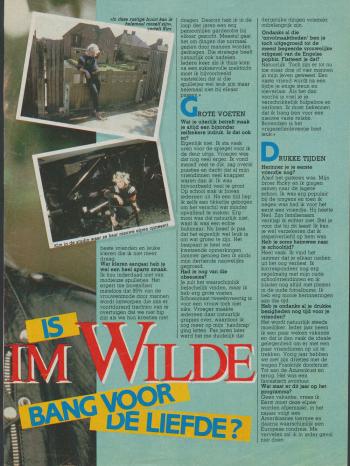