Kim Wilde: back and daring to tease

The new Gods of the pop music industry are not sex and horro. sex and horror are merely fetishes, the dazzling icons which represent and symbolise the deification of the promotional campaign. The sophistication of the image presentation and media exploitation seems frequently to outstrip that of the records themselves. After the commercial failure of Kim Wilde's last album for RAK records, 'Catch As Catch Can', Kim left the label and signed on with MCA. A new album, 'Teases and dares' is out on the new label and the promotional campaign has been instigated. 'The Sun' wants to talk to 'bouncy' Kim about her hair and her body; 'The Standard' speculates about her boyfriend; Debut wants to talk about...

The title of Teases and Dares is taken out of one of the songs. It's totally different in the song, but if you take it out of context and look at it as three words it's quite interesting. So we decided to put it on the album because it related to what we were doing. You're teasing the audience to buy the record with all the videos and the promotional campaign. It's all a tease anyway, everyone's commercial campaign is a tease.

Fighting off the bout of flu which had hampered Kim's teasing on a promotional tour of the north of England, she dares to reveal the mechanics of her re-style for the MCA comeback, er... re-vitalisation. The design company XL have played a major part in her refurbishment.
When I came to MCA someone said, 'look, meet XL, they're really interesting and they've lots of good ideas. I was interested in having someone look at me in an objectionable way... er looking at me in an objective way, and I liked that. What w ecame up with was very much instigated by XL, but we discussed it all the time. There was a lot of time taken and a lot of attention given to detail.

Kim's willingness to co-operate with XL's desire to look on her as an object, speaks volumes about her wish to comeback as a marketable commodity. So far the results of XL's objective, some might prefer objectionable, attention to detail came to the surface on the cover of Kim's last single 'The Second Time' and in the accompanying video. The cover photos from the video depict a sultry looking Kim modelling a 'tattered, torn and swathed in bandages' look on six inch stilettos amidst the post nuclear holocaust ruins of a motel room - the sex and the horror once again. But what did it all mean, Kim?
It's a journey back through time from the present, and it's set in a motel room. I go from looking normal to looking dramatic, and I end up having a fight with a monster. I think that's right. But basically it's about how strong and weird I am, and a bit paranormal, and how I create madness around me and frenzy... but it's all for effect, you know. It has a strange relation to the song itself.

For "strange relation" read 'no relation at all'. Which means another victory for stylisation over signification, the triumph of the singer over the song, the promotional campaign over everything else. Such niceties are not however of great concern to Kim. For her, the function of the video and all the promotion (the tease) is not to enhance or explain the music, but to loudly proclaim its presence - 'Here I am, come and buy!'. It's all done "for effect".
It's not like a long term image, not as if this is the way I'm going to be for the rest of my life. I hope it comes across more as an exciting added visual element to the single itself and not as a statement about me in the long term.

Like non-swimmers in diving watches, pop singers and film stars have for a long time been adopting the mannerisms of dramatic self-importance without wetting so much as a little toe in the cruel sea. Kim attaches herself to a loose muster of humourists who have in the past parodied such glamorous affectation. The Barbarella Catwoman figure is a favourite mock heroic example of the type.
I've always been very attracted to those sort of images because they're glamorous, and they're beautiful, and they're srong and they have a humorous sort of streak in them, you know, like the Batman series. It comes across as being serious, but it has a strong tongue-in-cheek element. I've always been atracted to those sort of things. Like Gary Glitter; he was always very tongue-in-cheek.

Kim's protestations that her image is not to be taken entirely seriously seem believable enough, but with her increasing involvement in the writing and production of her records, the conflict between self-parody and the demand for respect as a writer must get worse.
Before when I never used to write songs I got a lot of gib about that - 'Why don't you write your own songs? You obviously haven't got enough talent for your little finger.' So I thought, well I know I have, sod it, I'm going to write songs. So as soon as I start writing songs I get 'Well why are you writing songs now?' and 'Why didn't you write your single?'. They don't ive a girl a chance, do they? Anyway, I'll prove them all wrong.

The proof of Kim's writing pudding was not forthcoming in 'Second Time' which was written by the father-brother team of Marty and Ricky Wilde. A mock-Trevor Horn production and heavy promotion ensured a chart single ,but Kim's two album writing credits - 'Shangri-la' and the ballad type 'Fit in' seem likely to remain album bound. Kim feels that now the Wilde family owns it's own studio - Select Sound in Knebworth, the songwriting problems of the last album have been solved.
Before it was like being a golfer without your own clubs or a cook without a mixer, I mean you can do things adequately, but it's nt the same as having your own tools to work with. A place to go whenever you feel like it.

Whilst songwriting difficulties may have been solved with the material becoming "stronger and more mature" as the press release has it, the hangover from Kim's initial teenie pop image is not as easy to recover from.
I thought i had been changing quite gradually, I mean I don't think people see me as being as the teenager I was when I was doing 'Kids in America'. There was nothing very teenage about 'Love blonde'. I think a lot of it has got to do with the fact that people remember Kids in America and 'Chequered love' and they read stuff about my dad and think of me as the eternal daughter. I'll always be a daughter, and I suppose for as long as you're "the daughter" you're kind of looked on as a youngster.

No longer some piece of teenage wildlife, Kim is now able to look back in wonder on her early involvement with the chequered tapestry of pop. It was an involvement which she admits was sometimes naive.
There are occasions when I wish I hadn't worn that particular T-shirt with Brigitte Bardot on it when I didn't even know it was Brigitte Bardot, and then had a whole load of 'sexy-cat, pouting press on my hands.

Having had the press on her hands and getting on her nerves for over four years now, I wonder whether Kim might not have wanted to react against the 'love blonde' sex symbol image and the intrinsic sexism of the music business?
Well I didn't react against it because I was really all for it. Anyway, the media are more sexist than the business itself. I've been reading quite a few things just recently about myself which are quite obviously sexist and quite obviously written by men. Things like 'Kim has been lured away from living at home by the strong influence of her boyfriend Gary Barnacle.' As if I didn't have a mind of my own until I go and live somewhere on my own, which is exactly what I did anyway. But they can only see that a woman such as myself would need to have the strength of a man to be able to do anything.

Kim's newfound 'independence' which the media has so ironically chosen to attribute to the presence of a boyfriend, has according to Kim always been there anyway.
It's a bit of a myth that people get bullied or packaged or puppeteered or whatever. It's been a myth that's been propagated, especially with women, but it's not actually very true. As for people in bands, most of them have an awful lot of control - far more than I think they would care to admit.

Coming from a 'showbiz' family, Ms. Wilde has always been an easy target for allegations of paternal manipulation. Her defence is that she simply enjoys working with her father, he makes her laugh. And besides...
I would have been where I am today without him because Kids in America was written by Ricky, and we recorded it between the two of us. My dad only got involved with the lyrics at a later stage, but it was very much a hit anyway.

Whilst vehemently protesting her individual responsibility for her success as a pop singer, Kim nevertheless exhibits many of the characteristics of the 'born in the wings' showbusiness professional. The campaigns of promotion, the career planning, and the 'bargain with your audience' over getting recognised in public. All traits of the head-in-the-footlights stage stricken child. Yet two elevating attributes justify Kim's share of the limelight. The first is her plaintive, chandalier bright, slightly nasal voice which can on record transform a plain, limping hookline into a yearning moment of crystal-pop memory. The secnd is her sense of humour.
I think I'll do something really stupid on the next tour. I think I might go up to the front of the audience with a very heavy metal guitar, and do a Van Halen solo to relaly surprise everyone, including myself. I want people to smile when they come to the show, I don't want people to go 'Cor!'.

And as for the future, apart from having a fit and healthy body, and being more beautiful at 50 than now, Km has a few ambitions to fulfil.
I'd like to ge ta lot more involved with the music and with exciting projects, working with other people on the production level and the writing level perhaps. I'd like to write film scores and be involved in making films, perhaps acting. I think that's enough to be going on with. I want to excel myself. I want to surprise people.

Or should that be 'I want to XL myself. To XL design myself.' Design for living in the '80s - where once stood poetry in motion now stands poetry in promotion, the art of selling, the big tease. 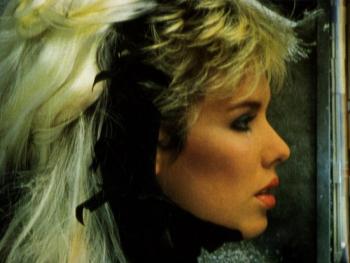 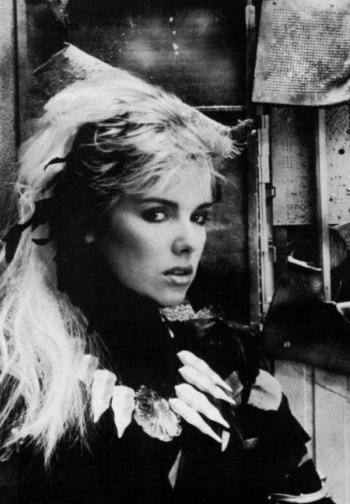