Halfway through her performance she announces a selection of rock and roll songs. The upright bass and the saxophone will be headlining. A singing love blonde leads us through the fifties. The crowd goes wild. All the spectators are jumping and dancing around. Two people only need two square meters to show off some hard dancing rhythms. Supported by a flexible band the love blonde sings a medley of rock classics that are unknown to most of her peers. But they don't have a former pop idol as their father...

This second short European tour is like the first one a "warming up" for England where her career is going through its first crisis. The last, and second, LP, flopped, like the last three singles, including "Love blonde". What if she didn't have the Netherlands to keep up her morale?
Kim: "I do live off the record sales in the Netherlands and Germany. And also the Scandinavian countries. In England it's not hard to get the venues sold out, but the record sales are slow. All of our hopes are focused on the new LP and single. And of course, the Dutch are very dear to this hardworking girl's heart."

On the 12 inch of "Dancing in the dark" that we received shortly before this meeting, a "re-mix" is made by Nile Rodgers on the end result that was delivered by Kims brother Ricky. Didn't he react angry to this?
Kim: "Of course not. The song seemed ideal for the American market. So we asked Nile to give it an American flavour. The time is right to try something in America. No wild adventures, but a serious attempt."

The song is written by Nicky Chinn, one-time partner of Michael Chapman, who pushed a.o. Blondie to the top regions of the chart. Is Chapman on the wish list or would that result in a fight with dad and brother Wilde?
"Dad and Ricky wrote and produced some very big hits for me. That doesn't mean that I don't try out some work from others from time to time as well. They do a lot of work for the album, but they do have to write hits too, of course!"

Of course, and if they don't, you can always try Chapman. Or why not Mickey Most, your employer and producer of Hot Chocolate?
Kim: "Chapman scored well with Blondie, but he wasn't able to see Agnetha to the Americans. He's a fantastic pop-producer. I would prefer someone with rock in his roots, though. Or soul, like Rodgers. Most is too busy anyway."

Although dad and mom Wilde still control their daughters career, the family ties are less solid than last year. Kim lives in a flat in London and does concern herself more with the choice of songs and the production. Do they accept that?
Kim: "They even applaud it. When I told them three years ago that I wanted to be a singer, dad told me that I should become the biggest of England and abroad. And that wasn't just father's vanity like Cliff Richard once seems to have said. Dad has known his ups and downs. He wants to spare me the downs. I'm becoming more independent every day, but I still don't do anything without his professional advice. Mom has always been in charge of dad's bookings, and now she's handling my tour."

And dad writes your lyrics. Wouldn't you prefer something written by someone your own age?
Kim: "Do you think Duran Duran's lyrics are better than my dad's? I don't. Dad is doing great, he's just a bit lazy sometimes. Maybe that's why he lost some of his popularity in his time."

They call you the singing Marilyn Monroe often enough. With "Love blonde" you encouraged that. Was that on purpose?
Kim: "No. I hesitated recording that song. I didn't want to emphasize it too much. But the song was too strong to resist. I felt that it wouldn't be a hit in England. It's almost a crime being attractive and being able to sing too. But you don't seem to have trouble with that."

On the contrary! Your posters are very popular and most boys' rooms are embellished by them. What do you think of that?
Kim: "That's what they're being made for. I'm sensible enough to recognise that I look good on a picture. Poster sales are important for me. A good source of income. I am vain enough to want to look good and business-woman enough to want to make some money out of it."

I've asked you to marry me three times over the last year, but I never got an answer back. Don't you answer your fanmail?
Kim: "I do, but only serious mail. Mom handles all the fanmail. Usually I just sign my autograph on a picture."

How much does your family make on your fame?
Kim: "They get a fair share. I'm not being exploited, if you mean that. I get a large percentage of everything, although I don't make big money. The costs are huge."

When she was an amateur, Kim sang duets with mom or dad. A lot of work from the Everlies or Simon & Garfunkel. Recently, she's been asked for a duet with Stephen Bishop. Did that work out?
Kim: "If he didn't erase my voice it did. I was nervous like on my first gig. I hope Costello hears that duet. I'd like to do one with him too."

And how are the film plans?
Kim: "I've been asked several times. It's understandable. But first I'm going to focus on my singing. After the next British tour I will be looking at the film offers as well as trying to break through in America."

We shall have to make do with your picture.
Kim: "I would never forget Holland". And after those comforting words she has me chased out of the dressing room. 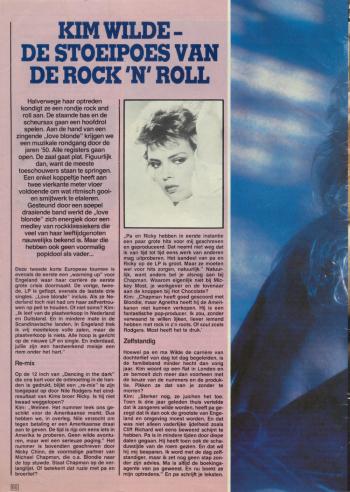 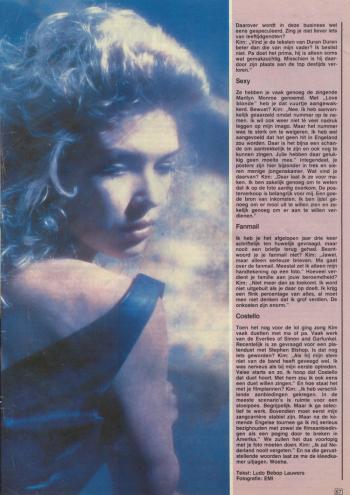