Name: Kim Smith
Born: St. Mary's Hospital, Chiswick, on November 18 1960.
Were you a swot at school? Very infrequently. There were times when I worked but most of the time I just did averageely well. I got by, you know. Never handed in my homework until the last possible moment. I waited until the sixth form before I started skiving properly. It was easier then. I had my own car and I could drive it into school.
Describe your bathroom: Well, it's got green tiles and black tiles. They're very old tiles, from the '30s. There's a wooden floor and lots of mirrors everywhere. The tap leaks and whenever I have a shower everything gets soaking wet because I haven't got a bath curtain yet. And the builders have just painted the window outside so I can't open it.
First record bought: "Big seven" by Judge Dredd. I was about 11 at the time. I don't think I realised how rude it was, I just liked the music. I had to order it specially from the shop, which is why I remember it.
What makes you cry? (Long silence)... Um... Oh dear... Frustration.
First crush: A boy at school when I was eight. I can't remember what he was called, but I liked him because he was goodlooking and he could tell the time. I was impressed by his brains. He fancied my friend, though. She was called Natalie, which I can remember because there was this horrible record in the charts at the time called "I Remember natalie". It was by Max Bygraves or Des O'Connor or someone awful like that.
Do you argue with your dad? No. Well, once or twice a year. Very rarely.
If you could travel back in time, where would you go? I'd go to Rome in the days when Jesus was around and have a good look around. I'd be interested to see how people lived and what they thought about and what their values were and what turned them on. I'd go to the Coliseum when it was covered in marble and they used to fill it with water for the games.
Does your mother play bridge? No. Never. I don't think she knows what it is. She attempts gold annually but usually retires at the nearest pub.
If you were a domestic appliance, what would it be? I wouldn't be a domestic appliance. I'd just refuse. You mean if I absolutely had to be? I suppose I'd be a video. Show some films and that. Or a TV.
Do you lie in the bath for hours or do you hop in and out really quickly?
I try and hop in and out really quickly. I find it boring and my skin wrinkles. But sometimes I get in late at night and I light lots of candles - with all the mirrors it looks really nice - and just lie in there and relax. It's cosmic.
First concert: Alvin Stardust at the Rainbow. It was in his heyday, whenever that was. I loved it. He was a tease. I really fell in love with all that glam trip. I was a big fan of Gary Glitter.
Last book read: The life of Montgomery Cliff. I just borrowed it off Steve Strange. It's fascinating though it's hard to explain why. It's fascinating to see how something that happened before you're born can affect your life. I can't explain. You'll have to read it.
Ideal weekend: Lots of surprises. Surprise phone calls. Surprise dinners. Surprise films on TV. Surprise video in the shop that hasn't been taken out. Surprised visitors. And lots of relaxing if I've been working hard.
What time do you go to bed? Never any particular time but usually after 2.00am. I never get up any particular time either.
What have you got in your pockets? I haven't got any pockets here at the moment. I'm pocketless.
Most embarrassing moment: Raving on about a great live drum sound on one of my tracks live when all the time it was a Linn (drum machine). I was talking to the A&R man at my new record company at my studio, saying "Linns are allright but live drums are much better." It didn't go down too well.
Do you have any recurring dreams? Yes, usually running away from something evil, like the Devil... or the Nazis. Colditz dreams, making escapes and things.
Favourite Toyah record: What was the first one she had out? I remember she had one about the same time I had 'Kids in America' or 'Chequered love' or one of those. I'd like to hear that one again, just for nostalgic reasons.
Will you be celebrating Halloween? I haven't even thought about it. I quite like the idea of celebrating it, but I'll probably gatecrash somebody else's festivities. I won't have time to organise my own. 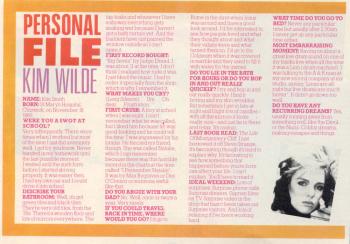