Most of Kim's music is written and played by her brother Ricki, who over the years has developed a very distinctive sound. His classy synthesizer arrangements are reminiscent of '60s spy-film soundtracks, creating an air of suspense and chilly glamour. "Suburbs of Moscow" and "Shangri-La" (Kim's own composition) stand out, but even the weaker songs have a tinge of excitement. Forget the naff cover, ignore the terrible lyrics, and you're left with a pretty good album. (6 1/2 out of 10) 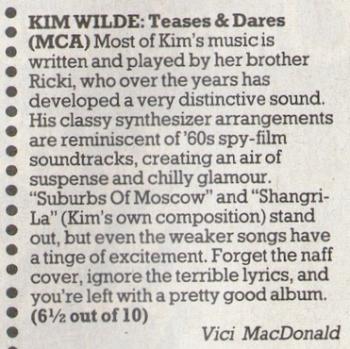