A nicely balanced set of promos featuring one of the loveliest, and certainly on the strength of those tracks included her, most talented female performers to have emerged on the music scene during the past couple of years.

She first appeared back in 1981, dressed in scruffy black trousers and a striped tee shirt and performing a little ditty written by her brother. 'Kids in America' shot straight to Number 2 in the UK charts, and before people had time to cry 'one hit wonder', this young Brigitte Bardot lookalike had notched up her second Top 10 hit with 'Chequered Love'. Both songs are accompanied by straight performance videos, with the latter enlivened by an occasional shot of Kim in the shower (head only I hasten to add). Where the promos, and indeed the songs come alive, are on tracks such as 'Cambodia' where shots of soldiers on the march through a steamy jungle are interspersed with those of Kim and various examples of tropical wildlife, or on 'Child Come Away' the story of an outwardly hapy American teenager attempting suicide.

Directors Mike Mansfield, Brian Grant and Tony Van Den Ende have succeeeded in capturing Kim Wilde's strange combination of vulnerability, sensuality and strength. The result in an eye-catching collection, which makes you doubly glad that she is back on the scene after such a long absence. 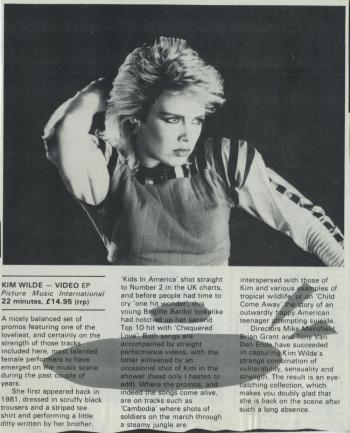