Like a Phoenix from the ashes Kim Wilde (24) wants to reach the highest heights of the charts again. She even wanted to make a bet with Popcorn reporter Jürgen Schütt, and he agreed.

There she sits, dress in a very contemporary black hobo-look (hobos were the name of American vagrants in the 1940's), with crossed legs, the hairs in a wild mane, as if she's just gotten out of bed. With that the eyes, that look, piercing and much-saying at the same time, with a touch of childish innocence. Kim Wilde, like one knows her from posters. Or should we say: knew? We look back. The European tour with three performances in Germany was already a year ago. After that the 45 "Dancing in the Dark" was released, her last big hit. Then Kim disappeared in the foam of the wave of success she'd had ever since 1981's "Kids in America". What remained was a flock of confused fans, who couldn't explain Kim's sudden disappearance. And so the first question to the reascended popstar is: why the long pause?

I have changed record companies, which took a lot of time because of the negotiations of the contract alone. I needed new impulses from people, a different team around me, to not have to hold on to an existing image and a certain musical style. That's important. Pop music is constantly moving on, the market isn't standing still. You have to change accordingly. I also wanted to take some time, finally, to work out some song ideas.

All fine and well. But don't you realise the danger of fading into obscurity, no matter how popular you were before?
"No, I don't believe that", says Kim confidently and goes through her hair with the tops of her fingers. "There are enough examples to the contrary. Just look at the international charts of the past few weeks. Colleagues Bonnie Tyler and Tina Turner had fantastic comebacks. We haven't heard from them in a long time, but suddenly they were extremely popular with the audiences again. It's important to have the courage to explore new ground musically. And to have the right song, which all the world wants to hear - that is the only important thing..."

Kim want to go up again. Her newest discs, the single "The second time" and the album "Teases and Dares" shall introduce her comeback. Again Kim's brother Ricky and father Marty have worked on the production. And for the first time Kim has composed and written two songs herself: "Shangrila" and "Fit in". What themes did she write about in her songwriting debut?
"'Shangrila' is a typical British expression of a paradise condition, which everyone is searching for in life. What belongs in that, is different for everyone - which is why this lyric is poetic, leaves lots of things open. On the other hand 'Fit in' is very concrete. I describe the irritation I had with my neighbours in my appartment in London. In the beginning we got along great, they always knocked on my door. In the beginning I thought they wanted my autograph, but the opposite was true: they were angry because I made too much noise with my music, while friends came late and night and left early in the morning. I believe everyone who lives alone for the first time goes through this kind of thing."

How does Kim put music to her lyrics? Is there a big musical change?
"My singing has become much more rocky", explains Kim, "everyone who has heard the single 'The second time' will notice this. A special accent in the sound in the bass. Steve Shurne, the new musician in my band, is responsible for that."
KIm continues about her change of style: "It's important for me that the music expresses a positive feeling for life and is danceable. The lyrics of my songs go deeper, have different themes and contents. There are descriptions of persons, love stories, looking back on my personal life, partly autobiographical, or sketching political or social problems."
For instance? 'Suburbs of Moscow', Kim's favourite song on the LP: "It's about the life of young people in Eastern Europe, being in a cultural conflict on a daily basis. They are living with a dictatorial regime, which doesn't leave any space for their personal development, but the jeans they wear show a bond with the Western world."
More abstract is the lyrical content of the song "The second time". Kim about this: "There's a hidden reference to the second coming of my career, but the lyric has multiple meanings!"
The stuff that dreams are made off can be found in the lovesongs "Just when we thought it was goodbye" and "Lovers on a beach". About love. Until now Kim has only talked about her work, but how do things look privately? is she still with Gary, her former saxophone player? A provoked look on her face (if looks could kill...), then the brief answer: "Yes". But the hours together have become less often. Thoughtfully, with a sad look in her eyes she continues: "Gary is working hard on his solo career right now. We meet eachother in London sometimes, where I have an appartment since one year. That's showbusiness."

She has left the family property in the provence of Hertfordshire. Why? "It was always my intention to write my own songs, but I never had the peace and quiet for it. I had to get out of the comfortable environment, needed a change of scenery. In my appartment in London I have my own space and I can make demos for as long as I want. This separation gives me a lot of creative strength."

Kim has spent many nights there over the last few months, had the life of a loner, only left home very rarely. "When I wanted to get out I called friends to go out to a restaurant or the cinema. It is important for me, that I spent my free time with people who mean well and fully accept me as a person, no matter if I'm famous or not. I am not so happy to be around the glamour types of the business all the time. I want to keep out of that circus. I am who I am, one of many people my age. I dress like my fans and have their lifestyle. There are no barriers. Mutual identification is possible.

The next few weeks will be exciting for Kim Wilde. Hit or no hit - that is the question. "I am very confident about the song and the video for 'The second time'", says Kim. "It was made by the same man who did videos for Frankie Goes To Hollywood and Nik Kershaw. I am very sure that I can end up in the top 10 and I will go on tour again before the end of the year. I would bet on it."

For instance?
"Well, we could bet a bottle of champagne on it..."
That's a deal! 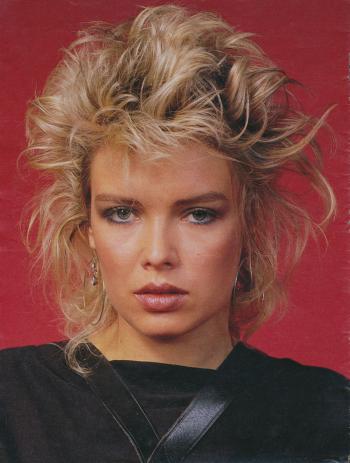 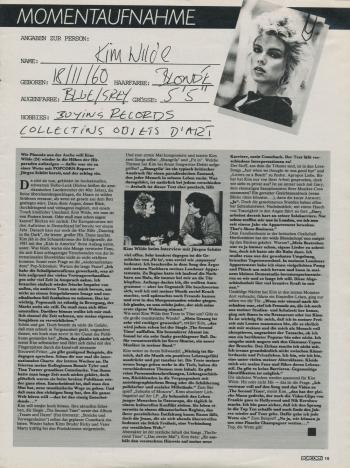