Although she has a sweet face and is a young girl, Kim Wilde is one of the latest sex symbols. Born in England, and reached the fourth album but only now emerging great, here's the new album "Teases & dares" and a profile of the blonde English.

Throughout the disc: song by song

Compared to previous work the new Kim Wilde album seems to have almost a plus: no measures or musical structures to be changed, however, and their progressive maturation of Kim to give the note more pleased, comforted by the excellent quality the interpretations contained in "Teases & dares". The album also marks the debut of Kim as an author, with two songs all hers, "Fit In" and "Shangri-La" (on the latter she also handled the arrangement) and a third, "Thought it was Goodbye" in collaboration with her father and brother. The two family members (authors of the rest) have made Kim a fairly particular musical formula, balancing the taste and rock'n'roll rhythms by dad Marty and electronics actuality of Ricki brother who however also demonstrates, since the choice of instruments ('57 Stratocaster, Fender Jazz Bass '62 Telecaster '62, '57 Grötsch 6120), a certain passion for some sounds a bit dated. United, at first, the electronic wave names, rock oriented dance, Kim Wilde now offers convincing proof of maturity and style, confirming artist of great quality on the streets of a reassuring evolution, supported by originality and elegance.

The touch: opening logic and catchy, well-marked under the rhythmic profile, attractive and equipped with keyboard-steps during the finishing. Grit and savoir faire.
Is it over: More attention to the atmosphere, regulate the choir, on bass (Gary Twigg), the unmistakable sound of the Gibson Les Paul Custom (Steve Byrd). Pulled out a bit too long but effective.
Suburbs of Moscow: a bit pretentious lyrics to a rock song at all transcendental, although vocally "Moskow!" It works great as a counterpoint. Appreciable as an attempt.
Fit In: It's the debut of Kim as a writer, a song a bit wordy and saturated into the arrangement, topped with a neurosis wire. Perfectly in line.
Rage to love: Closes the first side highlighting, thanks to the precise drumming of Chris North, the rock'n'roll temptations. simple and childlike text but here the pace is everything.
The second time: It is the first single from the album. high impact and great test polistrumentistica Ricki who plays all the instruments. Packaged for pleasure.
Bladerunner: Once generazinale quote on the thread of the cult movie, vaguely miacciose atmosphere, sense of danger lurking waiting decisive encounter. Quite predictable.
Janine: Female portrait constructed so haunting and sung with some excitement. Episode directed, well arranged but lacking sufficient originality to metitare prominence.
Shangri-la: The other Kim's song, this time with an intimate cutting good evidence. One of the best songs, a good omen for the Kim-author career.
Thought it was Goodbye: Closing in full respect of the content of the album, sounds elegant and insights happy for a lively and varied music, made with great care.

Kim Wilde through two or three images I have of her. The first of the series and the last live, in February 1982: a blonde girl sitting in front of me in a restaurant a la page, leather miniskirt, clear-eyed to scrutinize the ceiling frescoes. an early image as a reminder of the school, the pretty one that thou hast never tried that (now that he has married another) tells you that you would do anything. The second comes straight from the medium par excellence of our time, the video: a rock'n'roll song for a club jazzarolo clips, all made from dark suit, Kim in an evening gown, bandaged the point Guisto, some particularly beautiful evidence (ahem!), the most savvy provocative expressions. The image still aggressive a growing woman, aware of her role as a star but also capable of irony enough to not take itself too seriously. A singer, essentially.
The third and last in order of time, certainly the most recent at the official level and quelia cover of "Teases & dares", the fourth album of Kim, of which Ciao 2001 received a preview; photo cutlery, shining eyes of his beloved mannequin of a hyper-realist tailor, her hair a bit more clear. The refined disatcco who decided the figure of its elegance. Deliberately sophisticated.

Kim Wilde and one of the most interesting female voices emerged from England in this first part of the eighties. The demonstrably not only English and continental rankings (conquered from the first single, "Kids in America", January 1981) and the gold and platinum earned the first three albums ( "Kim Wilde", "Select" and "Catch as Catch Can "), but also the positive attitude of the critics and experts, testified, among other things, the award for" Best Singer femmile "record assigned by the British in 1983. but, beyond its merits songbirds (interpretative ability, cultured voice - he studied at the Art College - original and professional - and the rest lived in the middle of the music, his father, Marty Wilde - currently the author, together with his son Ricki, of almost all of the Kim material - he had some success on the rock scene of the sixties ...) Kim has run immediately revealed as a perfect character, aware of the aid which was by its natural beauty but also able to intelligently change, with credibility, and without excess extravagances.

Character gentle and versatile, saucy, femme fatale and sophisticated lady, Kim Wilde has earned a wide audience, perhaps oriented sales departments, focusing on song as direct communication, relying sometimes predictable sounds with interesting texts, not without a certain presumption in addressing metropolitan issues, generational and social. And this presumption is the indicator of a well thought out project, and definitely well underway, launching a singer but without bruciaria, to identify young people who do not need sex simbols but sentimental and emotional implications. The temptations of a scene that was trying to break free from the strict stylistic elements of new wave with small phenomena burned in the space of a season, Kim Wilde responded occupying a specific space, immediately claiming an identity that was madder continuity. On balance one can say that he was right.

Among other things Kim Wilde quickly realized the importance of the medium-Video: the British press considers the first Videostar because the "Cambodia" clip, one of the many individual dell'inglesina success, was the first to affect (and and a statistic) in a decisive way in regard to the sales of the album in question. About the song but also about a witch's little face (expressive eyes, upturned nose, pronounced lips, all framed by a thick blond hair) that Kim shines with wide smiles and fast blinks of an eye.

Returning to the image initial here is some detail that can be useful to a greater understanding of the character. For dinner, Kim went into crisis to clean the fish, removed the thorns from a rose and a mound of chocolate mousse (which also inizo to eat, senzo remember what had fattio few minutes before), he replied to the questions of bored musical character. It is fun to talk about themselves: can not stand jealousy also considering jealous and possessive, she likes to be treated like a girl her age (23 years), to impress with a little 'eccentricity and some sound bite. Her boyfriend ideal and tall, thin, kind and must look into her eyes. Throughout the lunch time I did nothing but guardaria in the eye, respond to the smiles with smiles, advise in choosing the dishes, fill the glass as often as it was empty, thinking, "A six-two ... high, are high ... 69 pounds, big is not good manners ... he taught me mama ... ".
Presumptions, of course. 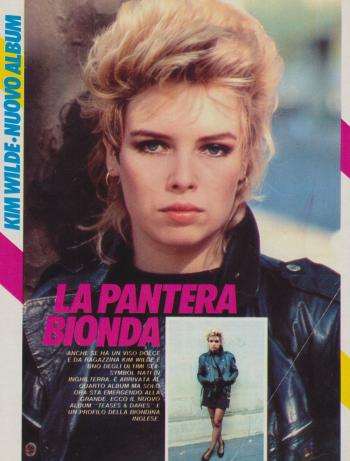 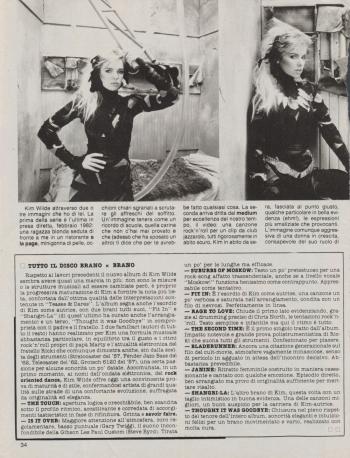 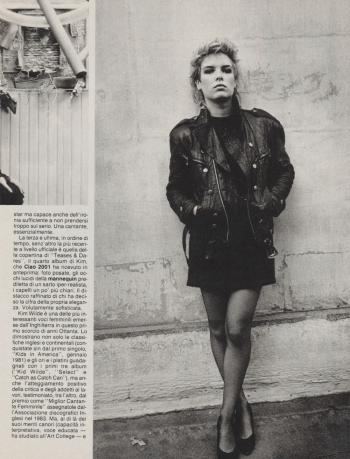 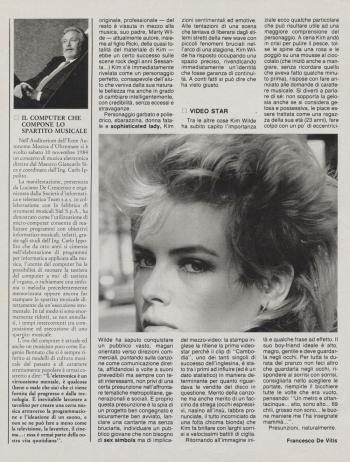 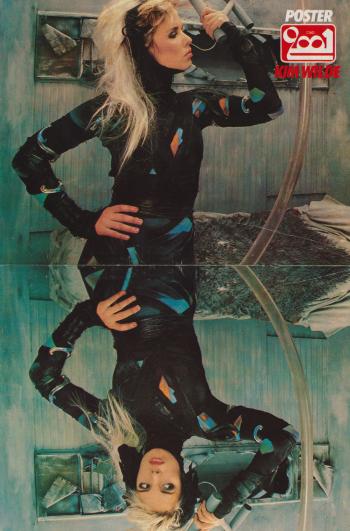