Date
6 October 1984
Published in
No. 1 (UK)
Written by
Martin Townsend

Martin Townsend goes Wilde in the country, well, Knebworth actually, and sees the return of the love blonde...

When Kim Wilde went 'Dancing In The Dark' quite a few things got knocked over.
The single flopped and Kim ended up with a new record company and a new image - dreamed up by the people who helped create Frankie's headline-style slogans and t-shirts.
She also discovered a brand new songwriter - herself! Previously her ex-rock 'n' roll star father, Marty , and brother Ricky had handled most of the songwriting.
And to cap it all, she now records in the Wilde family's studio - Selectsound - near the family home in Knebworth.

Dancing in the dark

"After 'Dancing In The Dark', I thought, 'I can't carry on much longer like this - I've got to get my songwriting together'," she admits.
"Not just because the single was a flop but because I wasn't happy with it as a song and I wasn't happy wasting my time promoting it when 1 could be writing."

The first fruits of Kim's determination are two tracks - 'Shangri-La' and the excellent, very moving 'Fit In' on her new LP 'Teases And Dares'. But do Ricky and Marty - who've guided Kim's career throughout - have a stranglehold on what she records?
"I think that's an obvious misinterpretation," says Kim. "They were chuffed that I brought these songs to them and there wasn't any doubt that they'd be included."
Although she says it didn't shake her confidence in her talented kin, the failure of Kim's last LP 'Catch As Catch Can', can partly be laid at their door.
"Rick and dad weren't writing a hundred percent the way they can," she explains. "They were going through a not-so-creative time and they admit that now."
So will she ever break away from her family completely? "People askmethat alot," replies Kim, slightly irritated.
"I mean, I really enjoy working with them."
"And what do you mean 'break away'?" she snaps. "I don't live with them!"
But wouldn't she like to write and produce a whole album, rather than just two songs?
"Well, my brother's told me that he'd like to write his own album and produce it and I said, 'great - so would I'.
"That was the natural thing that was going to happen, anyway."
Kim doesn't live with her family, but to clear up another strong rumour she doesn't live with Visage sax player Gary Barnacle, either. She lives, alone with her Portastudio, in a flat in London.
"I've read that stuff about me and Gary, too," says Kim.
"I suppose it makes a good story and sells a few papers. But 1 like living on my own."

For her new single 'The Second Time' , Kim has assumed a new image, devised by a company of artists and designers called XL.
"We had to figure out a story, visually, for 'The Second Time'," she says. "Virtually ninety-nine percent of pop songs are about making it with someone, so everyone has to create another explanation for their song.
"Obviously you can't have me writhing about on the floor making it with some guy."
But why not, bearing in mind recent Prince and George Michael videos?
"Oh no, no, no - you couldn't," exclaims Kim, horrified.
"And I wouldn't want to, anyway. There's no magic in that. There's magic in what you can create from something."
'The Second Time' is about returning to a place you were once happy in - nothing's ever quite the same.
The video transltes that theme into holocaust settings, with Kim as a woman who is "pretty benevolent, but very powerful."
"I've always been interested in Barbarella, Batwoman, Catwoman type images," she continues.
"One Christmas 1 sent out cards of Barbarella, with my head on."

Although Kim says she was "turned on by the Barbarella idea" because it's related to her, the real Kim Wilde couldn't appear further removed from that.
A few weeks back she spent a day at Alton Towers funfair with old friend Steve Strange.
Wouldn't it be better to portray herself honestly - as an ordinary girl who likes a laugh?
"Yeah, but it's really hard to get that across without getting terribly boring," she sighs. "It was good fun at Alton Towers, though. Steve was going up there to do a TV show ('Hold Tight') and - I know this sounds awful - if you go up with a pop star, you can get on the rides at the beginning!
"So these poor kids would be queueing for two hours with their candyfloss and we'd like, barge in..."
She grins guiltily.
So we'll never see an image of Kim Wilde just being Kim Wilde?
"Well, I have been myself for the last three years. But no-one seems to have cottoned on to who I am.
"See, the thing is... I conduct my private life in a very private way. Most of what I'm about encompasses that, but I keep it under lock and key."
Perhaps her own, very personal, songs will let some light in through the keyhole. 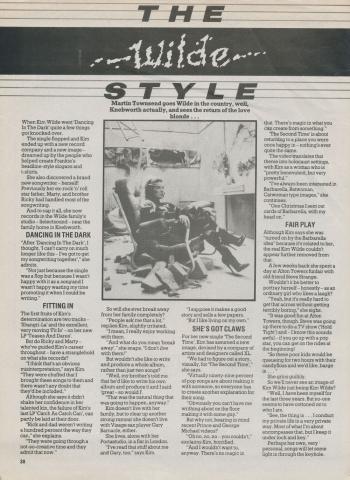 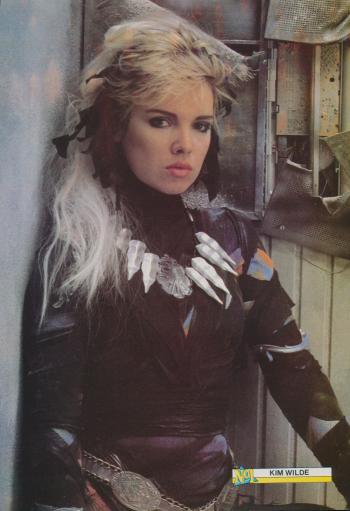