This is how Kim Wilde's new hit-workshop looks

Her first self-written song, Kim Wilde in the box! In her apartment in London's Regent's Park, she wrote to the synthesizer and drum machine number "Fit in" and fulfilled a long-cherished heart's desire. In the text, it's all about herself: how she "fits in" into family life, the showbusiness and groups of friends.

Both father Marty and brother, Ricky and Kim's new record company, MCA, when they signed the contract a few weeks ago, accepted the song right away for the next album, which will come on the market near the end of the year. A great success for Kim, who was quite frustrated lately. "I always felt like a stupid puppet that was put before the mike with the finished product, now I'm just fully involved", she says.

Even with the buttons on the console complicated it is now great deal - with a little help from her brother Ricky. To prove how well they've done during this last year of rest, Kim invited us to "Big M Productions" to Hertfordshire and personally took us through all the rooms.

Mother Joyce Wilde leads the regiment here: along with Fan Club secretary Angie and the assistants Nick and Chris, who sit at their own desks, they will take care of fan mail, fan club magazines (it comes every three months), meetings with record companies, concert arrangements and press interviews and photo opportunities.

Kim has just returned from Brest (France) from her first open air festival, where they played a two hours program before 12000 fans. There she also presented her next single, "Is it over", written by father Marty and brother, Ricky. It will come on the market in September/October.
In the highly modern recording studio in the rear building of the house there during our visit extremely busy father Marty and brother, Ricky mix a couple of songs for Kim's new album. She can have her say in things now. During the past weeks and months, she learned how to work with the mixing table and how the complicated buttons and levers operate.

She has her own opinion on how a song should sound, so she can now enforce it quite well. Brother Ricky has patience of a saint with her and often plays expert consultant. The relationship among siblings seems stronger and better than ever. The house in which Marty and Joyce live with Kim's younger siblings Marty and Roxanne, is just a few kilometers from the Big M office. Also, Ricky's new country house that he is setting up brand new right now. For Kim, who dwells at the northern end of London, is the way to Hertfordshire (also located north) is not too far. On good days, she chauffeured her black white BMW convertible in half an hour to "Big M".

Kim's hairstyle is absolutely now way two colors. The crop looks almost white with a rock hard black base - produces a hairdresser, not with Kim's own scissors. Brother Ricky is traveling at "Big M" with Mercedes 280 SL before and works every day from 9 clock in the morning until late at night in the studio.

From her apartment in London's Regent's Park, which is now finally set up onto the icing on the cake, Kim says in the highest tones. "Only the blinds need to be fit - as Japanese, raffia. Currently I have always felt that the neighbors can see me in the bedroom and bathroom ..." 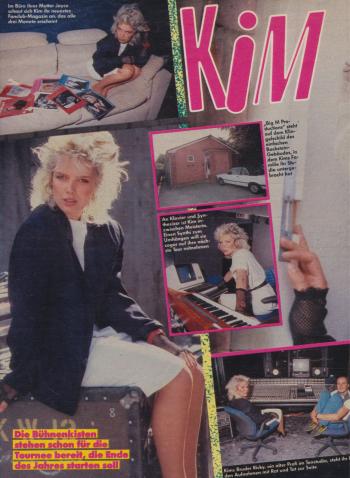 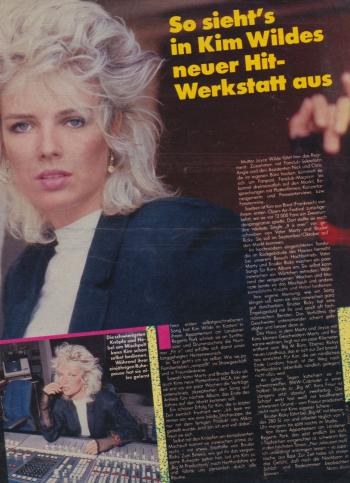