Kim Wilde has had a few difficult months, but now she is back in the limelight. What happened and how to proceed she tells us in an exclusive interview.

It has been silent around you for some time. Have you never worried about the future?
No, never. Every artist goes through a period like that. Although some journalists in England have written that it was over with Kim Wilde, that I was a one day fly, I never really panicked. I knew more than anyone about what was going on.

Which was?
My ending of the contract with record company RAK. I broke through because of them, but I felt things weren't done as well as they should lately. My boss was only interested in hits, whereas I felt more attention was needed for the albums. There were talks about that and when the producers stuck to their position, I left. They were squeezing me out, like they did in the past with other groups and artists. I wanted to stop that.

How come it took so long before you could start again?
Because I wanted to record a few songs in my own time. When you come with a great product, your negotiation position with other firms is better. Then you can convince them that your vision is the right one. After my breakup with RAK I could have gone to another company immediately. There were lots of offers. But if you've got nothing to offer them, they write the laws.

Especially since you just had a flopped single and album?
Exactly. When a company boss sees an artist with a flopped single, he feels stronger. He can impose his will onto you more easily.

You went to live alone in London. Because of a fight with your father, it is said.
That's nonsense! My father and I are still best of friends. I left for various reasons. It may sound strange, but it got too comfortable at home. Everything was arranged for me, and in the evening I couldn't resist watching the telly or chat with my parents. That's nice, but the downside is that you don't get a lot of work done. I needed some self discipline. I was getting used to other doing things for me, I didn't feel very independent. And that's not a good thing when you're in this business. Now I am obliged to do things myself. There's no-one to look after dinner, washing my clothes. I feel I have become more mature in the past few months. But other things have played a part, of course. I didn't have much room at home for my instruments. I had to be in London a lot, and traveling back and forth caused me to lose a lot of valuable time.

Don't you feel lonely?
I was afraid of that at first, but it's not that bad. I am making a lot of music, I read a lot and I write songs. It's surprising how active you are when there's no distractions. And if it gets difficult, I go out with friends. I can do that in London, people are used to seeing well-known artists on the streets. I have to laugh when an artist says how he has no private life left, and he can hardly go out the door. Someone like that only wants to appear more interesting than he really is. Of course you get recognised or spoken to, but it's not that bad.

Your album is ready. What's the next step?
America. That country gets all my attention in 1985. With 'Kids in America' I went to no. 28 there, but my record company didn't capitalise on that. One of the reasons I left. I think I can make it in America. Because since that small hit British music has become more popular there. At the start of next year I'll go on a promotional tour in the States. We'll see how it works out then.

You lead a very busy life. How do you cope with the stress?
I do a lot of sports. I go swimming and play squash. I gave up on jogging, because it was so tedious. I don't believe in sport for sport's sake. It's good to keep in shape, but it has to be fun too. Otherwise it has no effect. Stress isn't just dealt with by the body, but by the mind as well. Which is why one should pick a sport to enjoy. I don't do a certain diet. I don't believe in that either. I like to eat what I crave for, just not too much of it. That's another thing about your mind: when you deny yourself something that you like, you get unhappy and a diet can only work against you. 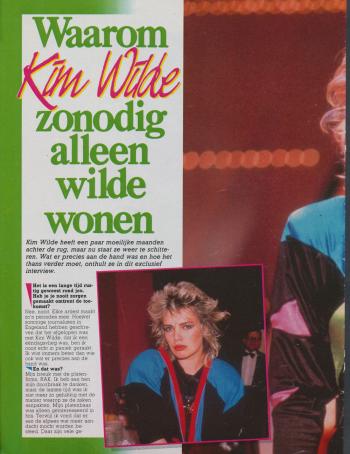 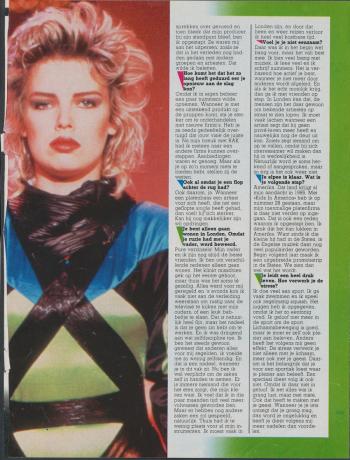