Wilde about the girl

Rumour has it that there are many things in life that are better second time around. Kim Wilde, for one, is hoping this is true as she prepares to leap back into the charts with her single 'The Second Time'. First things first though, Kim, your last two singles didn't exactly set the world alight, did they?

'No, they didn't set me alight either', she says, matter of factly. 'I'm just glad about the whole new thing. We've got our own studio now and lots of time to do things properly. We needed a new start, a fresh input, because the problem over the last year or so has just been a lack of good songs. M and Rick weren't exactly inspired writing wise.'

M and Rick, Kim's father and brother, sit in the studio behind us adding the finishing touches to Kim's new album 'Teases And Dares', while her mother nurses a torn ligament in her hand made worse by my vigorous hand shake some 10 minutes ago. Kim Wilde - the career, is still very much a family affair.

It must have been a worrying prospect for Kim when her career seemed to be going down the drain 12 months ago, washed up at 23. She looks up at the gold discs surrounding us. 'It was in a way', she says quietly. 'For me, it was a time when I didn't see the world falling apart at all because I think sometimes things have to fall apart if they're going to get back together again and I know that I wanted to get into writing songs, so I took the opportunity. I've got some of my stuff on the album so I'm dead chuffed.'

Indeed she has, and one song in particular, 'Fit In' more than proves that Kim has the family ear for a good melody. To accompany her 'relaunch', Kim has changed her image. It's a classier more mature Kim I'm talking to.

'It's not a fashion images because they date so quickly', she points out. 'The garment that I'm wearing isn't very defineable, it could be from the Forties or it could be the Nineties. I like things with a timeless quality. The character is heroic, brave and strong and very much the woman of the Eighties. Intelligent, independent and strong.'

Even that famous head of tousled hair has been replaced by a well manicured cut. 'It was in a really bad state and I thought, oh my God, what am I going to look like when I'm 30 if I keep putting this stuff on? I hate going to the hairdressers, spending two and a half hours over a bloody sink and looking at myself in a mirror isn't my idea of fun. It's like going to the dentist.'

Was she upset with her old 'sex kitten' image, Iask? 'It didn't upset me', she smiles. 'You can't really whine about that but I thought some of it was quite funny. Like I could be sat here like I am now just wearing a pair of trousers and they'd make out they were sitting next to this sizzling sex pot. There was very little I could do about it.'

Well, she's still got blonde hair and big lips so I presume we'll still all go for it. There won't be a repeat of the leather mini on Top of the Pops, though. 'That was a horrible little skirt really', says Kim, screwing up her now. 'And the bloody camera went right up it!'

For a 23-year-old, Kim has been through a lot. Success in the pop business is a strain many can't handle and yet here she is coming back for more. Kim seems so relaxed and at ease that you just know she'll be successful all over again. How much has she changed since the days of 'Kids in America'?

'I'm not out to prove that I've changed much', she says, pushing those famous lips over the edge of her coffee cup. 'I don't think I've grown up at all, I've regressed, definitely. God, the antics we get up to around here, well, it gets like a boys school - very silly indeed. Everyone's always playing practical jokes on each other and I did a great one on Ricky the other day. I bough him this.' At this point, Kim takes a small box from the top of the TV and places it on the table in front of me. It looks like an ordinary pack of playing cards festooned with a naked lady on the front of the pack. Kim urges me to open it and as soon as my fingers touch the top - you guessed it, I get an electric shock up the arm which brings a stifled cry from me, and sends Kim into fits of laughter as she cracks up in the corner of the settee. Thanks Kim!

Has she missed being in the public eye, on TV, in the papers, the fame of it all?

'No, I don't think abouut that too much because my main motivation for getting into this business is because I really love being involved in music. I have a passion for it and it's not like I have a passion for being famous or for getting free invites to Stringfellow's. I could quite easily live without all that if I had to. I must say it's good fun being up there in the charts but I could easily find my fun somewhere else - go mountain climbing, skiing or do a bit of crochet.'

Kim Wilde is out to prove to herself and to us that she can still sing and more importantly write successful songs. She's very determined. 'I just want to get people ound up either way', she grins. 'Prince is like that, isn't he? You either love him or you hate him. I'm slightly nervous, of course, but I'm really interested to see what reaction the album gets because for the first time I've been really involved with it and it feels like my baby. I'm looking forward to talking about the music as well because I used to get so bored talking about myself. There's only so many times you can talk about boyfriends or hair gel with any enthusiasm, whereas I can always be enthusiastic about music.'

Cynics will see Kim's words as bravado but she convinced me that there's life in the old kitten yet. If you don't believe me, you're in for as big a shock as I got. I'll get you back for that, Kim. 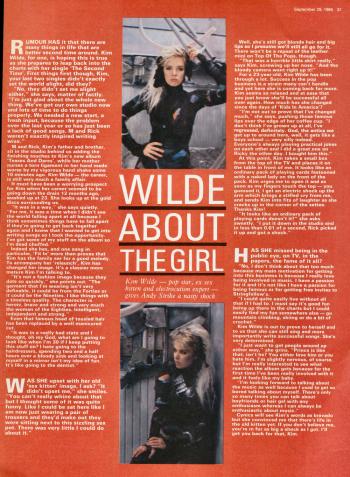 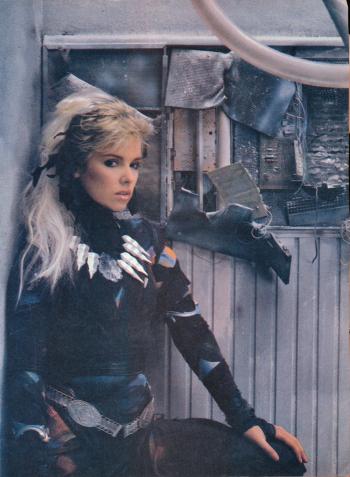