The countdown has started! Tomorrow (March 15) the big Kim Wilde Tour starts in Hamburg, and thousands of fans are waiting impatiently for her new show. The blonde English woman is also very nervous right now, about how she will be received by the German audiences.
Despite this she has invited Bravo for the rehearsals of her tour, to have a look at the last preparations.
In London's Ezee Studios, where she works nextdoor to Paul Young with his new band "The roaring boys", things are very hectic. Kim, dressed in a black coat and an Al Capone hat, is standing behind the microphone and is working on her selfwritten song "Shangrila", from the latest album "Teases and Dares".
She is accompanied by a fully new band: from the old band only Richard Blanshard (saxophone) and Steve Byrd (guitars) are left, new are bassist John Edwards, Jeff Hammer (keyboards) and the drummer Preston Heyman.
Inspired by her latest single "Rage to love" Kim has named her tour the "Rage to rock" tour and she has chosen an original Rock 'n' Roll outfit to wear during the tour. Big coats in fifties style underline the theme, while she also wears jeans and shirts.
At least ten hours a day the singer spends in the studio, goes through the 19 songs with her band time after time, until the last chord and the last solo are perfect.
Kim will be tended to during her tour by her best friend Clare Smith, whom she lovingly calls Smitty. Smitty is just giving her friend a cup of tea, which she drinks from hastily after which she puts it on the piano next to her.
Head director of the proceedings in the studio is Kim's father Marty, who puts his trademark on the song "Rage to love". As master of the old days, he was on stage together with Cliff Richard in the fifties, he gives his daughter a few tips. But he won't come along on tour this time, just like brother Ricky, who has written a few songs for the live show.
Both, who have always tended to Kim personally so far, now say: "Kim is doing so well and has such a great show, that she doesn't need our support anymore..." 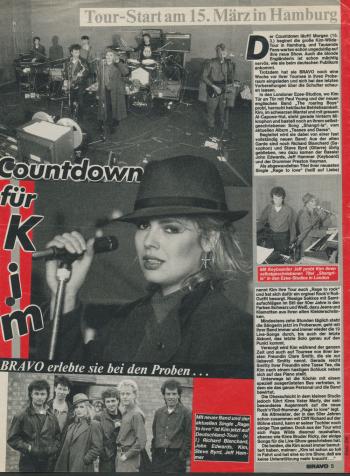 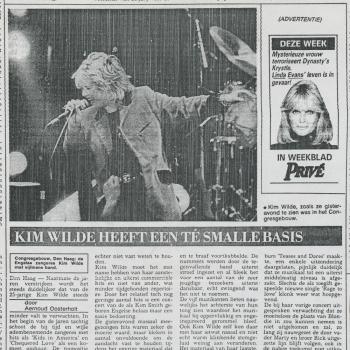 Kim Wilde is based on too little