"How do you write your songs?" "Do you live together with your boyfriend?" "Would you like to make movies like Marilyn Monroe?" "What do you like to do the most?" - These and other questions were at the tip of Bravo-reader Oliver Grosskopf's tongue, when he met Kim Wilde for the first time in London's Bravo photostudio.
"I like to sing in the bathtub, because then I think about melodies which I can play on the synth later."
"No, I don't live together with my boyfriend, but Gary and I spend a lot of time together..."
"I am first and foremost a singer, not an actress. But filming my new video for "The touch" was a lot of fun - maybe I will do a real movie someday."
"I prefer to sleep a lot. And when I'm awake I like to listen to music".
These are the answers to some of Oliver's questions.
The 16 year old student from Regenburg flew on a plane that morning for the first time and came, together with Bravo photographer Didi Zill, who took him along from Munich. The excitement began just before he was about to meet Kim!
Kim appeared punctually at the arranged time, at noon, in the studio right next to the famous Covent Garden Opera. She ware a black leather jacket with matching trousers and a dark sweater, and she was more nervous than Oliver himself. When he gave the golden Otto in the name of the Bravo readers, she blushes like a schoolgirl and pressed a kiss on his cheek as a thankyou.
Until the photo session, that lasted for about two hours, Oliver played the assistant: he helped Kim pick out the clothes she was wearing for different shots. He even advised her on her makeup. "In fact you don't need much with your superb skin", he said.
During the build-up of the backdrops Oliver was glad to help out, just to be near Kim all the time.
"Oliver, bring me the mini skirt from my car" "Where is my hairdryer?" "Darn, I've forgotten the matching lipstick", these kind of comments came from Kim's dressing room. Oliver was always glad to help out.
After the photosession Kim took her German guest to Covent Garden Market, close to the studio. She showed him a few stands with curious merchandise and showed him a few funny boutiques. She even wanted to take him on a merry-go-round under the blue sky.
But just as she wanted to get on the back of a wooden horse, 20 or 30 fans came toward her and begged for an autograph. And so she invited Oliver into her white BMW with a black roof and drove him past the landmarks of London: Parliament Square, Big Ben, Thames bridges, Buckingham Palace, Oxford Street. 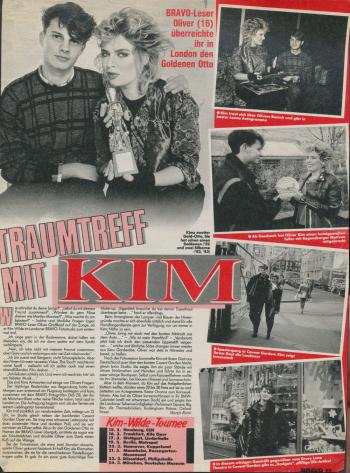