And this, Kim Wilde explains, "can be a bit lethal". When it comes to choosing a new image, she'll try anything. Some look great: with others "I think MY GOD!" William Shaw helps her flick back through the photo album.

Kim Wilde is wearing this rather fine 1950's Teddy Boy jacket. It used to belong to her Dad, Marty, in the old days when he was a rock'n' roll star, but now Kim has taken it out of mothballs, dusted it down, had it taken in a bit and is using it as part of the new rockabilly image for her single "Rage To Love", a song written by her brother Ricki and her Dad and, appropriately, remixed by veteran rocker Dave Edmunds.
She's rebelled against all those glamorous specially designed costumes she was wearing 12 months ago for the single "The Second Time", and now she's ambling around the headquarters of the Wilde operation in the more familiar old pair of jeans, t-shirt and her Dad's old jacket.
"When I made 'Rage To Love', I was determined to come across as the sort of person I really am, as a performer, which is a side that hardiy anyone's seen recently," she explains.
The Wilde H.Q. is bustling. In the flashy new studio they've built in Knebworth, Hertfordshire, her brother Ricki is messing about with an expensive new computer he's just instalied there ("I don't suppose 1'11 be able ta get near it for weeks," complains Kim) while parents Joyce and Marty are there looking after various pieces of business.
Last year's abandoned image came about after a time when things hadn't been going too well. After a string of hits stretching back to "Kids In America" in 1981, her records had begun to flop. Despite the moderate success of "Love Blonde", by 1983 she found herself without a hit single and without a record contract.
"After 'Love Blonde' we did a version of a song called 'Dancing In The Dark' and that's when we hit rock bottom... or rock bottom-ish I should say, because we were still doing quite well in a few European countries."
The problem, she reckons, was that the Wilde team simply weren't coming up with the songs any more. "The singles just weren't so good for a while," she says frankly. "We dried up. It happens to a lot of people. But it was worse for Ricki and Marty because they were the official songwriters. I had this kind of optimistic nonchalance and I just thought 'Oh well. C'est ia guerre.' I can't deny that I must have got despondent about it sometimes."
But when the low period bottomed out, Kim was with a new record company and there were pressures to come back with a bit of a bang. So when it came to the time to promote the new LP "Teases And Dares", Kim found herself with a new stylist whose job it was to make sure that she wouldn't pass unnoticed - Tom Watkins from the XL design team that's been involved with Frankie Goes To Hollywood and Nik Kershaw among others. Kim's been through a period of saying how much she hated the whole thing, but now she looks back on it with slightly cynical amusement.
"At the time 1 thought 'Oh yes! It's quite wonderful.' I had all these people around me saying 'Hey! Great! This is a great idea!' This, that and three bags full, and going 'Yeah, yeah, yeah!' I mean, I'11 try anything. I'm like that, I'm game for a laugh, which can be a bit lethal. If someone comes up and says 'How about this?', I'11 say 'Alright then' and land myself in a situation where I think 'MY GOD! What am I doing here?' But at least I throw myself in. Some people never even give it a try."
So now she's gone back to wearing the kind of things she feels comfortable in.
"I never wanted to be in a position where 1 would have to be a servant to an image. I just wore the clothes I wanted to wear, jeans, whatever. I like wearing men's clothes. I always feel uneasy wearing something that's all tits, or anything that's very feminine or beautiful," she says displaying one of her newer acquisitions, a black rockabilly drape jacket with a maroon fur collar and cuffs that she bought for £50 in Carnaby Street.
'S'nice innit?" she says. "It's not terribly weil made, but most things in Carnaby Street aren't. I always remember this guy in Tenpole Tudor... he had one like this."
Which harks back to the time that Kim had an 'emotional involvement' with one of the members of Tenpole Tudor, the group who'd made a name for themselves for their ridiculous performances and thunderous anthems like "Swords Of A Thousand Men".
"Mmmm." She's always wary of bringing her love life into interviews. "That doesn't exist any more... Great band, though. One of the best I've ever come across," she says, skirting around the subject.
She likes to keep her private life private, recoiling trom the loud Frankie-type media approach. "It takes an awful lot of energy to do that, and I need all the energy I have just to do what I do. I did get a bit involved in the media thing with 'The Second Time' - which was very much that way orientated, very heavy media. I did that and I was really enjoying it, but then I couldn't handle it any more. I kind of went AAARGH! Hate it! Hate it! Hate it! Throw it out the window! It made me realise that I'm not very good at the media thing, I'm not tailor-made for it."
Does not being the sophisticated media star have its disadvantages?
"I don't know. I don't like being phoney. I'd be phoney if I went out to night clubs doing the right things, going to New York. It just wouldn"t be me. I mean, I might not be the most 'sophisticated' person but I'm just being as true to myself as I can.
"So," she says as she inspects her jacket, "I think I'll stick to wearing stuff like this now... Then again," she laughs loudly, "I might just change my mind!" 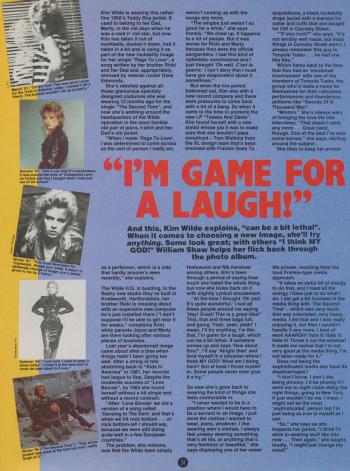 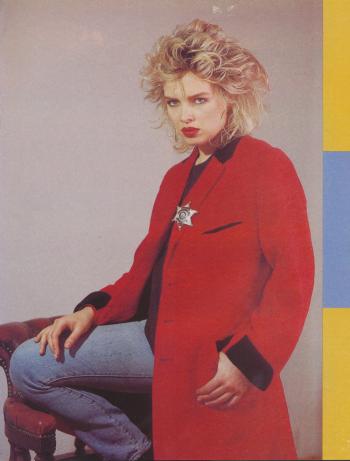 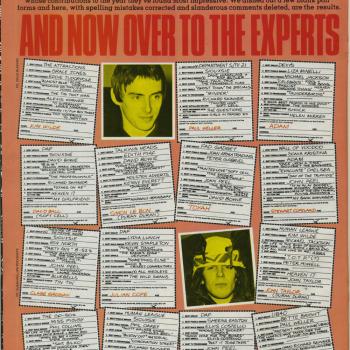 And now over to the experts