Kim has to kiss a frog

What is a frog doing in a television studio?, wonder cameramen, lighting men and compares when a girl with a glass case wanders up to the spotlights. In it is a frog amidst ferns and grass.

The filmset consists of a soft couch with colourful pillows, two chairs, a commode and a closet. It all looks like a cosy living room and it stands in a studio in London's Battersea Park. The cameras are rolling today for Kim Wilde's new video "The Touch". There are camera people everywhere, technicians and compares dressed in colourful clothing. Two ugly made up men dressed in glittering robes are up first.

But where is Kim? "Kim is resting in her dressing room right now. Yesterday she was filming until nighttime, and today it is going to be late again. Or early, depending on your view..."

Okay, so we knocked on the door of Kim's dressing room. No answer. We quietly open the door. There she lies, with two red cheeks, sleeping on a much too short couch. We don't have the nerve to wake her, so we go back to the set.

Only some time later, after which she is awoken by the director himself, we hear from her that her video for her new single "The Touch" taken from the album "Teases & dares" is about free translations from fairy tales. For example, everything Kim touches turns to gold during her sleep as a princess. In her usual clothing - Jeans and a blouse - she kisses the frog on the couch, which turns into a handsome prince.

"Also the most handsome male models are dancing in the video", Kim explains, "and there is a Mr. Universe somewhere too..."

Until now she has only seen pictures of her handsome partner, but she is already attracted to him. "In the video everything I touch transforms", says Kim, who goes to the ball with her two step sisters as Cinderella, in a deeply cut black dress with high heels.

The video recording is a lot of fun for her. she is also happy that her single "The second time" is having success in America. For Kim, 1985 will be the big breakthough in America, she hopes. Her record company will start a huge promo campaign, to make her successful. She will travel through the States in this new year.
Christmas she spent with her family and her boyfriend Gary Barnacle... 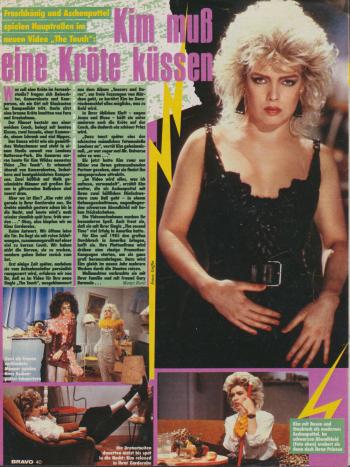