Will she do it again? Kim Wilde who reached high with his first hit 'Kids in America' has made a comeback with a good LP and new, cheeky image. Rocket phoned her up in London, England.

Kim has not had it easy lately. The English press has called her flop, fiasco and "one hit wonder". But Kim did not sound bad. It's true, she did not reach as high as with "Kids in America", but last year's trial, "Dancing in the Dark", was not at all amiss. Now she switched record labels to MCA, and returned with a bizarre, futuristic image, complete with 12-inch heels on shoes.

"Yes, we thought it was appropriate to change carriers when the old contract expired", she tells ROCKET with a sweet and cute voice. She is also sweet and cute, but with an undertone of saucy sexiness. Her previous anonymous image has been shelved.

"It was time for a new approach. MCA sent me to a fashion designer who arranged the new "look". I think it looks really cool out with the slightly surreal environment and bizarre clothes. I hadn't invested much in an image before; I always wore a T-shirt and patched jeans. Now I go all out with this new gadget again on posters, covers and in videos."

Last year, Kim spent much time on promotional tours in Europe, primarily Germany, France, Holland and Luxembourg. There was TV and radio hit there. Pretty tedious, but essential for an artist who has lost far too many followers. Kim's new single is called "The Touch" and is, as usual, written by her father Marty and brother, Ricky. On the LP "Teases And Dares" however, appear her first two original compositions, more she did not get finished.

"I would have liked to have had with more, but we were pressed for time. It's fun to write songs. I've worked with Dad and Ricky before, but now it was time to do something for myself. Right now we are working together better than ever. It does not matter that it's my family. When we work together it is a band."

Where does the inspiration come from? "From everything possible. Stuff happens to me and other people, sometimes really banal things I write down for fun."

You must be influenced by other artists. Which do you think is the best right now?
"Prince, Stevie Wonder, Chaka Khan and Paul McCartney - well, almost everything that is high on the charts. I am a contemporary aware person".

Kim began her career after art school training and understudy who did backing vocals on a few records. It was Ricky, her brother, who wanted to make his big sister a success. He wrote "Kids in America" and the carousel was running. It became a great hit in America too, she says. "Unfortunately, my only hit there too. The other records weren't even released, but "Teases And Dares" is out and MCA are working hard on the U.S. right now. I go there sometime this winter."

Right now Kim is finalising details for her European tour. It will be a huge investment that hopefully will, again, make Kim a name to reckon with.

"I long to Scandinavia, she laughs. I looove snow!"
Enjoy on you, Kim. I am sitting and freezing my ass off and yearn for sun and sea bathing. 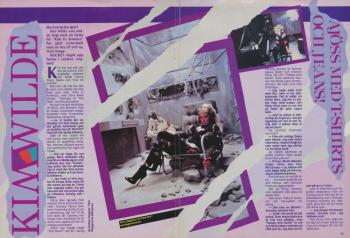