Kim Wilde: 'I always wanted to be on stage!'

Kim Wilde will try again to reach the top with her latest LP 'Teases & dares'. Here in Sweden, not so much has happened with it - but maybe it's not too late!

Kim Wilde has been in Sweden on promotional visits before, but this is the first one after switching record labels. Her fourth and latest LP 'Teases & dares' is already out in the record stores, but the question is whether it will get her up to the top again. Kim doesn't have the obvious hit, as she had with 'Kids In America' and 'Cambodia'. Maybe on the next LP this will happen, which she will soon start to work on. But before there is actually a tour! 'We have plans to start touring in February,' says Kim during the visit to Stockholm. 'I've put together a band and when I get home, we go through the tour plan and begin rehearsals.'

Kim has been economical with the tours since her breakthrough in 1981. When she finally came to Sweden before last year her hits were already forgotten, and therefore the audience wasn't so big. 'It is silly that I didn't do more tours,' says Kim. 'But my former record company was not particularly interested in doing tours. They concentrated more on videos and television programs, but now I hope that it will be different.'

For the new album, Kim has written a few songs himself. It is the first time for her and she was a little nervous about his debut as a songwriter.
'I've only written two of them,' says Kim. 'And I have not enough good songs to fill an entire album, but next time maybe the last.'
Do you like writing?
'Yes, now it feels better. At first the progress didn't happen very fast, but now it's paying off.'

Kim lives in an apartment in London and one of the rooms, she has made into a mini-studio which is where she is testing her song ideas.
'I have a drum machine, a keyboard and a tape recorder,' says Kim. 'It gives reasonable results.'
Kim has played piano since she was five years old and she can read music, but she does not write down her music.
'I do not think I could do it, it is difficult', says Kim. 'And it is not needed.'
On the new album is, of course, both father Marty and brother Ricky have written songs.
'It works well to work with them', says Kim, smiling. 'Although we do not always agree!'
Will Ricky to go on tours?
'Now and then,' said Kim, and hesitates. 'Ricky is great on tour. He is a bit crazy and does the most insane things...'
Although things have been slow for Kim in the last few years she harbors much promise for the future and she has never regretted that she chose the music career.
'I always wanted to be on stage. If I had not invested in the song, maybe I tried acting course.'
As for acting school, Kim has never been to and it says she is happy with the policy. 'It shows in my videos!'
But she has played tater in school and participated in other sets as well.
'But I would not be any second-class actress', said Kim. 'The worst thing I know is when the singer or singers make a movie and doing it badly. But have to give everything and therefore I do not think that would deal with both owners and singing simultaneously. At least not that I know it today. I may of course change my mind over the years ...'

One thing that eagerly discussed in the English press is Kim's relationship with the opposite sex. Kim is very secretive about his private life and says that it has nothing to do with her career. 'But yes, I have a boyfriend', says Kim. 'We have had each other's company for years. I have tried to keep him out of the press, but it is silly to deny that the timber is joined.'
Her boyfriend is one of England's most talented saxophonists, says Kim. 'The press speculated wildly about our relationship, sometimes we have broken up, sometimes we have come together again. And, they insist that we live together - but we do not! I prefer to stay to myself a while.'

When Kim is not with her boyfriend she's with different sports. 'It's so nice to relax away all thoughts sometimes,' says Kim. 'And I do best when I practice a form of sport. Right now, I like to swim and I'm doing and trying to learn diving. But it's so hard, I just do flounders!
Skiing is also something that Kim is fascinated by. When I met her last time she said: 'Sometimes I dream about living in a chalet in Montreux, somewhere in the mountains where I can go skiing after breakfast and water skiing after lunch ...'
Now water skis for the case have been replaced with clean swimming, but in the summer, she takes them up and rushes out as soon as she has time. 'I have started playing squash too,' said Kim, 'it's good for stamina.'

But mostly she sits at home and compose new songs.
'I have the need to write regularly to do it well,'  says Kim. 'You can not just leave now and then, a couple of hours, each day actually needed!'
We'll wait for the next album to hear more of Kim's songs, but the first thing she languidly are encouraging and perhaps next time she can do without Marty and Ricky's help... 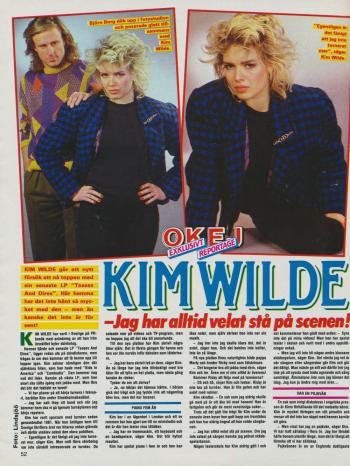 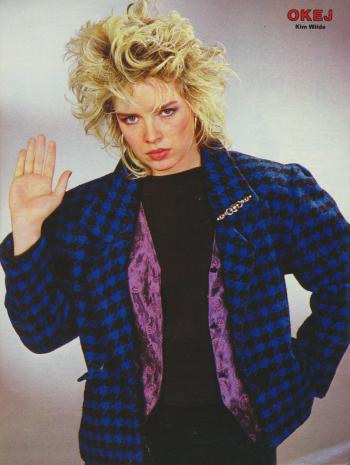