If it is WEA-Metronome's merit or not we leave unsaid, but the fact is that Kim Wilde had significantly more off the ground since she landed under the protection of the MCA label.

A stubborn, but successful advertising campaign and help from TV has made the Swedes discover Kim Wilde again. The latest LP "Teases and Dares" was slow at first; single, "The Second Time" became just another question mark set in a career that begins to go down at an alarming rate.
But then came "The Touch" and corrected the situation. Kim got well deserved exposure and came to Sweden and a well-stocked Göta Lejon.

We were very pleased with the album, she says. No suspecting how much we struggled with each song. When it did not sell, we were very disappointed. Thankfully it starting to happen again.
What is happening is in itself nothing earth-shattering. LP still sells no luminous numbers, but her name has become aktuell again, and no longer associated with the fiasco tour that destroyed her reputation last time she visited us.

Kim has sensed trouble in her homeland, England. There, they write nothing, she sighs. It's a bitch. They just ignore me. It was, after all, where I broke through from the beginning.
But the record company in the U.S. has switched to. They want her to come over as soon as possible and show up. And maybe Kim's new style can find a home there. She has thrown away the jeans and T-shirt. They were hopelessly outdated and Kim understood that and adapted. Nowadays, sexy skirts, fishnet stockings and stilettos are mandatory.

Unfortunately, she lives not up to its new image on stage. She manages to effectively hide her radiance in dull tights with a white blazer as a complement. Neither the show seems very inspired, but one must perhaps be lenient with tonsillitis which lowered mood several notches.

I like to show off, she laughs. When I was little I always let the trumpet my birthday. And several weeks earlier, I wrote in large letters on the blackboard: "Kim has her birthday on November 18." In the beginning it was a bit nervous to be on stage, but I learned quickly to control the crowd.
Right now years Kim in place at home in England and recording some song ideas that will hopefully show up on the next LP, recording scheduled for september.

I will have even more original songs on it, she concludes proudly.
If your disc buyers to discover it too ... 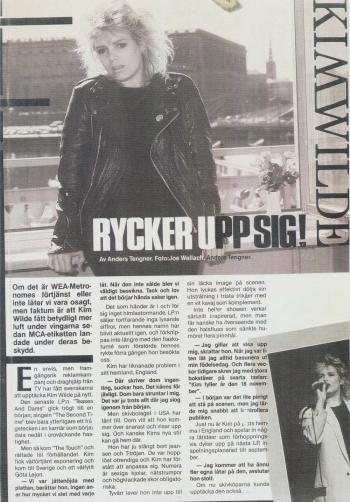