Mid-demon, a little ingenious, a little bit bitchy, it's Kim, the devil's daughter with the torrid voice that burns the boards and charms the heart of all her worshippers. She comes to Switzerland, Kim Wilde, on March 26th, at the Palais de Beaulieu in Lausanne. This is the opportunity to tell the most blonde of the rockers and learn, perhaps, two or three things that we know of her.

She has a sulky face and poses of a teenage pinup. In the grisaille of an unemployed England, the singer, with her sun-blond hair and her very ripe lips, dazzles like an ingenuous and perverse Lolita. It must be fixed: Kim Wilde is exactly the type of star that appears on the walls of many boudoirs. The glossy reflections of the glossy paper, its rocky look; The eye a little dull but devilishly canaile: the blonde doll looks like American pulp comics. In vulgar language, she looks like the bitch! But that would be rude. And forget that her voice flows like honey ...

This article is dedicated to the grumpy macho who persists in thinking that rock is a matter of men. Those for whom the Patty Smith, the Marianne Faithfull are nothing but beasty intellectuals; Those who take the groans of a Kate Bush or a Pat Benatar as a mockery. Side of hot flashes and adrenaline flashes, which man would dare seriously compete with Diana Ross or Grace Jones? Not one!
Of course, we saw propelled to the scandalous heights of the hit parade of the girls who had rockies only a handful of thugs calling themselves musicians vaguely scratching on their sides. Or a cousin concierge in a recording studio.

Kim does not cut her pretty hair in four

Kim Wilde, that's another thing. Rock with the Wilde is not just a tradition, it's a religion. A family matter.
Today, Mister Wilde, first name Marty, the father of Kim, can still squirm with any of the singers half portions in fashion. Think: the English Elvis! The dramas less. A rocker mythical, author of some unforgettable successes between 1957 and 1962. Kim did not grow up listening to the German classics of the eighteenth century ...
So, even if the dad is no longer at the age where you cooed on stage, he did not lose the knack. Neither the sense of show-biz.
His idea? Setting up a family business. Like the Jackson, but in addition reduced. At three. With Kim, her voice soft as a white truffle and her perfect plastic, the more fragile Ricki, who made her scales at home.
Since the first record (1981), the father gives the la, writes texts and music, and Kim interprete, with her white smile like a snowfall ...
Here, one should not believe the photographs of Kim Wilde. Especially not the beautiful ones. She always looks sad with this pout a haughty and sulky. Kim Wilde hates the pictures.
One should not believe the interviews with the fist-in-the-teeth, with the interviewer, tense at the start, which emerges systematically emptied and ridiculous. The kid hates to move on to the question.
Complicated and capricious? Not even. What she likes? It shows immediately: his songs and his audience. Quite simply. In these troubled times, or half-crazed like Nina Hagen or Cindy Lauper would like to make the law, rock had a rough need of a singer who does not cut her pretty hair in four, and do not comb them in pink-green- Fluo! The rock needed a blonde. A real blonde!
The rest is in twenty lines. A first album 'Kim Wilde', reasonably rock and nicely caressing, makes listens to a rather jaded public. Debbie Harry (Blondie) already spends more energy in the games than on the scenes; The rock that purrs like a cat enters a dark period. But Kim is coming!
On the second disc 'Select', the singer appears reasonably naked and nicely seductive! With a huge success, the piece 'Cambodia'. The album climbs at full speed in the hitparades. Kim Wilde refuses more and more interviews that are solicited more and more every day.
Then, the decor and the musical ambiances change somewhat. As always when a group suddenly has the means to offer some additional keyboards. The synthetizers caressed in the direction of the hair polish quickly the angles of the music. The sharp guitar riffs are passed through a sieve; less brutal, tempos more slow. With her fresh and sensual pop songs, mouths made to embrace and an insolent talent for swaying, Kim Wilde invests in discotheques.
Easy, but friendly. Like her famous duet with Johnny Hallyday.
Since then, her music has moved away from rock, to something more 'variegated', more round, which sticks like a jeans to her airs as a perverse girl. But she still balances as well, beautiful Kim. The side of his voice as on the side of his hips. And we would always want to give her the devil without confession. 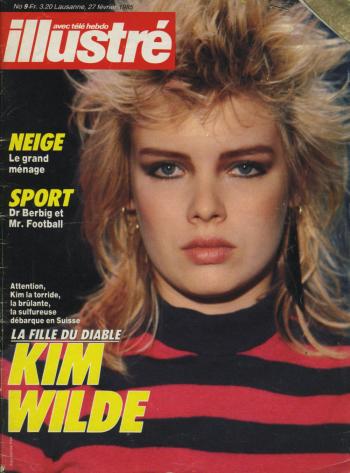 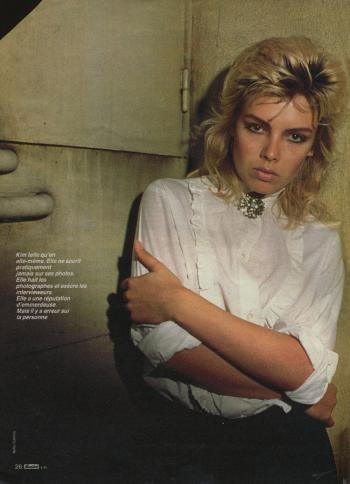 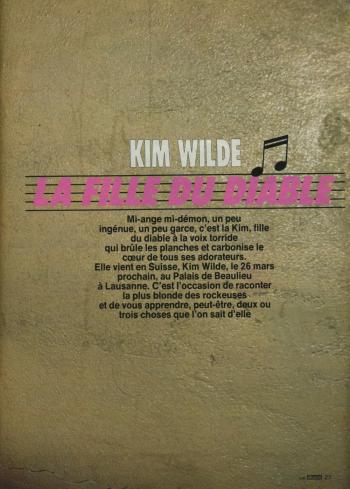 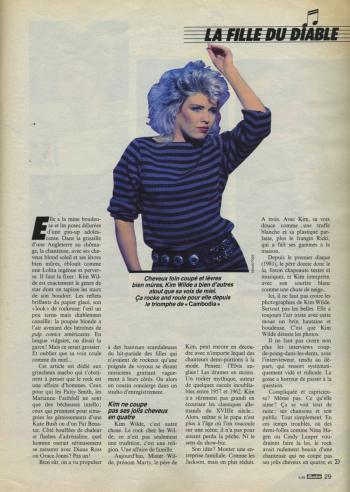 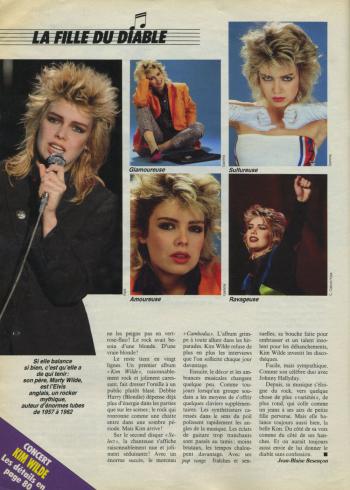