Kim Wilde: the queen of the arena

On the occasion of the tour Arena 85, Kim Wilde comes to the arenas in the company of Telephone. An unforgettable meeting of French and British rock.

Friday, August 9. 10 hours. 'Hey Bocquet! The sun, rock and a beautiful blonde, how would you like?' The question is posed to Bob Bocquet,  postponing the shock at Salut!, raising the head up slowly, emerging from a pile of files, cleverly arranged in a mess on the desktop (no. 1 tactic of a journalist who tries to pretend that he works). From his plush armchair, the scribbler looks out the window to the rain flooding the streets of Paris. During the month of August. Not a time to put out a journo. Yet, the combination sun-rock-blonde wakes his sleeping senses. In two phone calls, the case is concluded. Bocquet must spend the weekend on the coast with Kim Wilde! Wow! This is the kind of story as I love them! A few hours later, here I am clean-shaven (a kind of performance) and my backpack on the back, installing me comfortably next to a window of Airbus. I use the trip to learn by heart the first three lessons of 'Easy English'.

Friday, August 9. 18 hours. Nimes Airport. Direction Hotel Imperator in the center of town. Finally, information taken, it appears that I will not really go head to head this weekend with girlfriend Kim. Not really alone. In reality with a score of others. Mostly guys, too. Hum. Second disappointment: Kim will not have much time to let me make her eyes soft. His schedule is rather busy! Actually, reading out a mission statement, I realize that if I am there, in Nimes, in the sun, it's not nice to the heart, all expenses paid, but to follow the tour, 85 Arena which involved the burning English. Arena 85. A simple idea: make a summer tour of arenas in the south of France. Some concerts only: Frejus, Nimes, Beziers ... In the program two groups superstars. Telephone and Kim Wilde Band. A surprising combination, but great. Kim didn't actually think she would spend the summer on the coats of France. Her manager had rather planned to do a tour in England. Alas, the project could not be done. Then the proposal to play with Telephone was made. Kim did not hesitate.
It was a good opportunity to resume the path of the stages and stretch her musicians who had not played together since Copenhagen, a few months earlier. The occasion also wins over the French public.

Friday, August 9. 19 hours. Accompanied by Nathalie, my charming companion of the record label WEA, I cut a way through the crowd that is pressed around the arena at Nimes. All tribes, all styles are mixed. Preppy, punk, vacationers, babes ... Two men open the backstage doors for us. Purpose of the visit before the concert: trace Bernard Wolf, the photographer of Salut! and Kim. The scenes have been comfortably furnished in an arcade, the kitchen, and against the ancient walls a series of computer games have been arranged pinball, pacman, etc.. Types and tanned shirtless are checking out the pleasures of these precision instruments. Nathalie recognizes them as a part of Kim's band. Presentation, Bla-bla. No, Kim is not there, after the sound-check she's returned to the hotel. Still no trace either of the singer, or photographer. In the hotel garden, we catch our breath around freshly squeezed orange juice (health first!). At a nearby table, Jean-Louis Aubert answers questions from a free radio, Corinne Richard, and accompanied the actor Farid Louis Chopel come soon join him. At our table, two British playful and friendly people. One of them speaks French with a charming accent. He is a photographer, but it is especially saxophonist Kim. The 'sexophoniste' as known to his colleagues because of his skills as a seducer. The second receding hairline and ponytail, is none other than Ricky Wilde, the brother Pygmalion, which ensures the guitar in the group. Our prey should no longer be very far away. Suddenly she appears. By the time I collapsed to the ground with emotion, I got up, muttering a few words of welcome, she sat opposite me and ordered a glass of white wine. While sipping his drink, very French, she glances at me. I feel it in my heart, crumble again. This time the time I reappear, she disappeared again. It's time for the concert.

21 hours. Arenas of Nimes. Is there a theater grandest and most appropriate that the arenas! Those who doubt were certainly not at the concerts of this tour Arena 85. Imagine 12,000 people stepped on the stone steps of a historical movement. As a ceiling, a starry sky. At the bottom of the arena stage. In the said scene, six musicians, two guitarists, one bassist, a drummer, a pianist and sax playing a hellish rhythm. Lighters light across the crowd. Kim, resplendent, arises the microphone in hand. Ovation for nearly one and a half hour, the tracks follow each other, hits and lesser-known titles. Going through all the pallets of rock, rockabilly and punk through the ballad, Kim is proof that it is a true rock star, turning resolutely away from a certain British pop variety. The rock is her music. And when Telephone comes on stage, unlike many artists after their performance finished prefer returning to the hotel rather than attending the rest of the show, Kim remained backstage. Throughout the concert by Telephone, the British star and his musicians clapped their hands and feet, taking as much pleasure in the spectacle of the public. Yes, she admits, she likes French rock of Telephone. And it remains silent pleasure of admiration for the prowess of Richard Kolinka, the drummer.

Saturday, August 10, 10:00. The caravan moved off towards Cap d'Agde. The evening concert is at Beziers, but the hotel in Cap. A few hours later bottling, we arrive at the seaside Easygoing, relaxed, Kim spends her early afternoon with us. Stroll in the harbor. Coffee break and relax by the pool. The sun reflected in his hair, unless it be the opposite ... special moments ... paradise. Hoot. The dream is crumbling. It's time to leave. The bus with tinted windows opened. Each take their instruments and rushes into the vehicle. The door closes on Kim Wilde. Back for a tour ... 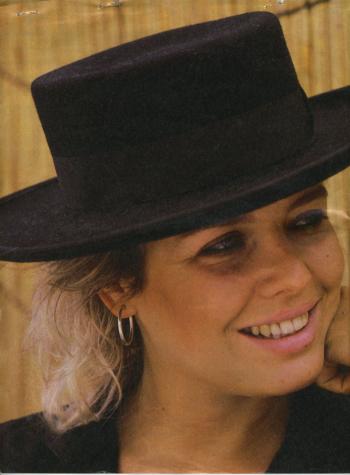 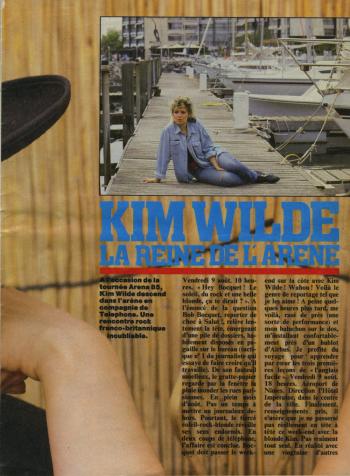 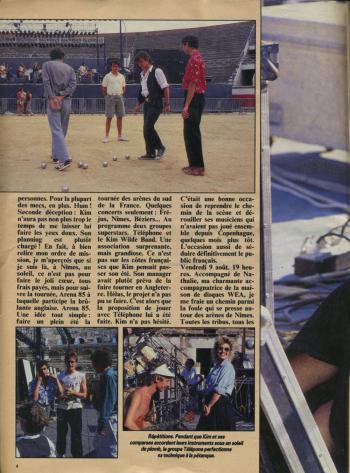 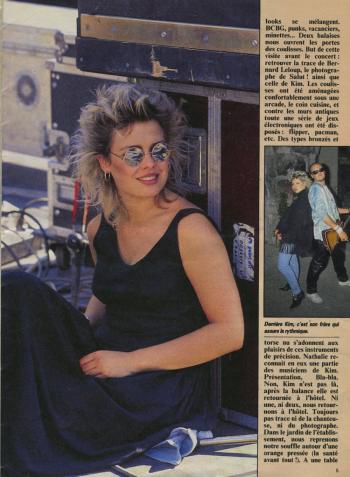 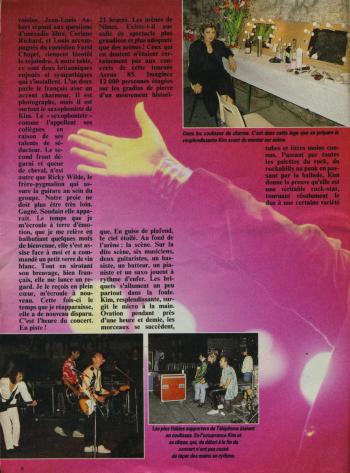 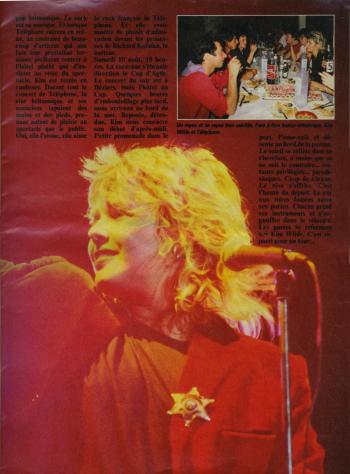