Beautiful Kim Wilde is living in fear of a crazy-eyed fan who follows her everywhere she goes.

Police have watched the singer's London home in case the man attempts to attack her. The fan, dubbed 'Dracula' because of his wild red-eyed star, followed Kim for thousands of miles on her recent European tour, dodging security men to reach her dressing room more than once. She was forced to change hotels several times when he was found laying siege to the lobby.

"I'm not paranoid about myself at all, but there's no point in taking chances", says 24-year-old Kim, whose latest single Rage to Love was released yesterday.

"It's very scary. I've met this guy and tried to talk to him but he seems to be in a very strange mental state. There's no knowing what he'd do if he got me alone." 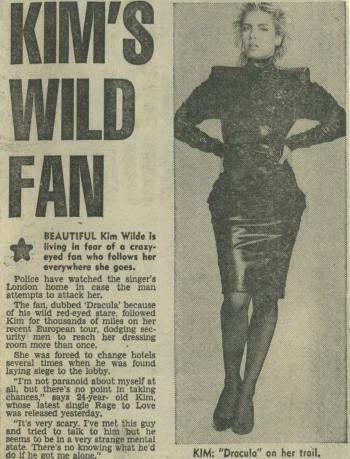