Kim Wilde confesses all to a hot-blooded Patches scribe...

Why have you recently begun slagging off your past and changing your image?
I haven't. I was misquoted in an interview, and most people got the wrong impression. It happens quite a lot, and can be very irritating, but there's nothing I can do about it.
What happened was that I went to a company called XL Design because I wanted a new look for 'The Second Time' video, and they came up with this science fiction-like costume and hairdo. It was a one-off project, but somehow it was carried ove rinto other things - like the LP sleeve for 'Teases And Dares', and people thought it was a contrived change of image and a switch in direction. It gave the wrong impression - and of course the press misunderstood the whole affair, and as a result, it got out of hand. Then I made the situation worse by going back to XL for the follow up because I wanted to keep a kind of continuity - which made matters worse!

Do you regret the way you were presented when you first arrived on the pop scene?
No, not at all! I certainly wasn't hyped to fame as people have often suggested. What I did and the way I was presented was natural to me. I went straight from Art College on to T.O.T.P. without changing! I don't believe in dressing up all the time - it's far too much effort! It's just not me. I don't want to look like Boy George!
You have to do whatever feels good for you. It's an individual choice whether to have an image or not, and I just wanted to go on stage in the same clothes as I would wear if I were out shopping. Mind you, I still have a great amount of respect for people who have outrageous images - like Gary Glitter!

How do you feel now about your earlier videos, such as 'Kids in America' and 'Cambodia'?
I still enjoy watching them, although I didn't have too much say in what went on at that time. Now I do, and with 'Rage to love' I insisted that it be a 'live' video because it suited the song, and even watched while they edited it down, which I've never had time to do before. Videos are great things to have. They mark your history more accurately than anything else, and it's nice to see how much you change over the years. I'm never 100% happy with my videos. I'm always very critical of my own work, but I often find that my opinion is very different from the general view, and I have to climb down and take their advice.

You must have been one of the first 'Videostars'. Did you realise at the time just how important video was becoming?
No, I never expected them to become so influential. Now, I think they've lost a bit of their popularity. But the important thing is the final effect - if it moves you then it's good.

Are you still as close to your father and brother as you were? Do you need their support more or less than before?
Just the same, I think. We're a co-op where we have to take in everybody's point of view before making a decision. Even my mother is very involved the business side of things, but if I feel strongly about something then I get my own way!

Isn't there a danger that because they're family they won't criticise you - even when you need it?
No. They can be very harsh if they have to be, and it's not very nice when that happens! Luckily it doesn't occur very often. I know that they don't say things just for the sake of it.

Do you feel you're in control of your career, or are there moments when you feel you're on a merry-go-round and you can't get off?
yes, there are a few occasions when I've felt like that and I've run off to get away from it all! Mind you, I think you need to be pushed along a bit, otherwise you'd never get anything done. It's bad to think you have unlimited time.

Do you still enjoy doing T.O.T.P. or does the long wait between rehearsals and the actual show spoil it?
It can be very tedious, but I still enjoy doing TV. I've taped every show I've been on and catalogues them for the future .But the real thrill of T.O.T.P. is when you hear you've been chosen for that week's show. There's no other feeling in the world like it.

Which country are you most looking forward to touring, and why?
America definitely. Mainly because my favourite music comes from there, and it's so musically alive. There are hundreds of different radio stations over there and each one specialises in a different type of music. British radio stations are more interesting, but in the States they have a much larger choice to make up for it. It will be strange being in a place that we've already written about, but had so little time to spend there. 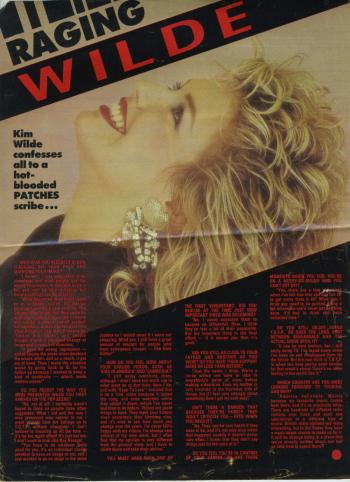