Recent interview about her big tour: Kim steals from Elvis

At a one hour's drive from London towards the north, in the middle of the provence Hertfordshire, lies the 'nerve centre' of the Wilde family. Here father, mother, son, daughter, friends and acquaintances work under one roof. "Big M", founder of the family, is the JR of Hertfordshire. Together with son Ricki (he will marry his girlfriend Mandy on June 15 by the way) he writes, produces and arranges Kim Wilde's singles and albums. Mother Joyce takes care of the merchandise sales and the financial side of the Wilde corporation. Young and old work here hand in hand - harmonically. Kim Wilde wore jeans and black shoes, two t-shirts over one another, an old teddy boy jacket and a sherriff star. During the talk the band entered the building, to start rehearsals in the small home studio...

Who are part of the band during the forthcoming tour?
They will be five musicians and myself. It's still my guitarist Steve Byrd and my keyboard player Jeff Hammer, and new are Preston Hayman on drums, John Edwards on bass and Richard Blanshard on Saxophone. Seven weeks ago we started rehearsals in a different band, and I noticed that things didn't go so well. I changed the drummer and bassist - and now it all fits.

What will the stage look like?
It's all fitted towards the new single Rage To Love, a real rock 'n' roll song - that's why we let ourselves be inspired by Elvis Presley's "Jailhouse Rock" stage for the video. We wanted to make the stage higher, on which my musicians and me could dance - but probably that would have become too expensive.

Will you dance with your musicians?
Yes, I want to practice a little choreography with my band - not for the whole show, but for a few songs.

Are there examples for your show?
Of the women I only like Tina Turner. But I let myself inspire by Elvis and Prince - from Prince alone I've learned a lot. He's on stage with other musicians, creates a different scene for every song - that is real showbusiness. Overall the Americans let it all hang out more. English bands often just stand on stage and play their songs - that has never impressed me.

What will you wear on stage?
In any case not the costumes I've worn for my TV performances. They have confined me, and I want to move around more on stage. I may return to my original style - jeans, jackets and t-shirts. During this tour I will change clothes a couple of times, by the way.

What does your setlist look like?
We will obviously play a lot of songs from the new album, all the old hits and of course the new single "Rage to Love", which is my overall favourite right now. We may play a few old rock 'n' roll favourites - that would fit well with the stage design. It will be a very action packed show, and I have to be fit for that. Before the tour I will go on a skiing holiday with good friends for a week, to get a good state of fitness.

Are you still together with your boyfriend Gary?
(laughs) Hmmmmmmmmmm.

Does he come on tour with you?
No. Gary will be there while we're skiing, but on tour I prefer to be alone. He has just finished an american tour with Elvis Costello and could use a little peace and quiet right now. Gary has also played on Tina Turner's album by the way. He does a lot of things, and we both know that we couldn't be together all the time.

Were you ever bothered by a male groupie?
No, never, I can't remember even one (laughs). I believe that men are too proud and are afraid that I could say no - they don't even bother trying.

What has been your biggest concert up until now?
I was recently in France for a festival and played in front of 25.000 people. I was only one of many artists performing there. But the reaction of this mass of people has given me a lot of selfconfidence. Compared to that a concert before 3000 people seems like a high tea. I am a lot more at home on stage and don't have any problems anymoer to interact with the audience. In the old days I used to be afraid just to say hello. Thank God I'm not that shy anymore.

For the tour rehearsals you've moved back into your parents' house. But how is living alone in your city home for you?
I enjoy the freedom, when I'm home - but it also has its problems. Recently there was water coming through the ceiling and it flooded by bedroom. I'd just come back from an awards ceremony and had to start working with buckets and rags to clean up the mess. It keeps me grounded.... 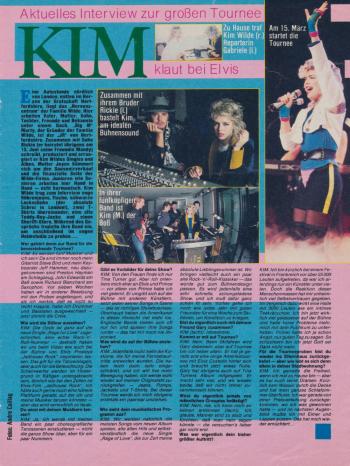