There she came to Germany, for "The Second Time"., which is also the title of her latest, if not very big hit. The blonde girl, who cites herself in the song: "She's a love blonde". Is she this idol who has mainly male listeners, who is cool and young and looks like the photographs she is on?

One reason for the MS-editor Christian Wagner to find out, who is behind the childish looking Lolita-face.

Kim Wilde - this name has become familiar to everyone. More than just an English predecessor of Nena. In 1981 the success of the English woman Kim Wilde started, daughter of the in England very famous singer Marty Wilde. The 24 year old brought many hits into the charts, such as "Kids in America", "Chequered Love" and "Water On Glass". Supported by her father Marty and her brother Ricky, who wrote the songs tailormade for her, signed the family business Wilde to RAK Records in Middlesex, England.

While on the first cover the faces of the band appeared, everything was focused on Kim's face on later album covers. And her merchandise sold good. In England and abroad. Kim Wilde became the face of T-shirts, shawls, calendars, postcards, posters and much more. What can we conclude? Kim Wilde became a pop-star. Someone who at first didn't appear live, and later just a little bit, but still someone who kept the till ringing.

Looking at photos of Kim Wilde, one can always see a melancholy, even sad look in her eyes, which some might say is lascivious. This girl, who seems alien to the concept of being a woman. Or have I been damaged by the media already? This woman often looks cool, almost arrogant in videos and on TV. And one thing sticks out: Kim Wilde (almost) never laughs!

How did this woman end up in (pop)rock? Trying to shed some light on this, I have two views, which I will tell together in order to try and give some insight in what Kim Wilde is.

Kim Wilde invites an interview. Before Musik Spezial several broadcasters were present, so that I was the fifth and last in the row. Good or bad? Surely the lust on being interviews sinks a little near the end. There is some excitement, although it is fleeting, nearer the date. As moral support I take my girlfriend along for the interview. It takes place in the Hotel Steigenberger, there is exclusivity. One call to the room, we are asked.

The door opens, an older gentleman greets us, not Kim's father, a friend. He stays along during the talk. It all seems a bit cramped. Is it just me? I think about the interview partner. Kim Wilde is very "homely" today. In black stretch pants and white shirt. Slightly disheveled, so no pictures. O.K.

Kim sits down in her chair, the table is full of coffee mugs. She seems a bit introvert. The detachment, which emerges in interviews with musicians sometimes after a period of "warming up" is not coming. During the course of the interview Kim laughs twice. She looks like someone who isn't completely happy, but isn't aware of this herself...

What does the song material look like? Will there be many pieces from the new record "Teases and Dares"?
Yes, we have included a lot of songs from the new LP. But the hits will also be there. I feel more certain of myself for live performances, so they're more fun now. The line-up of the band has also changed. Only Steve (Byrd) on guitar is there in the new band.

So you like to perform live better now?
Yes, a lot more. I used to be so nervous before performances. During the last tour I had some days off between gigs. That was terrible, I hated it. I wanted to play every day. During this tour I need the days off more, because I work harder now. The set has become more exhausting.

Do you change the songs when compared to the recorded versions?
Yes, I believe no audience likes to hear a perfect recreation of the record.

You have had several periods of success behind ou. The first album was a big success, the second, 'Select', sold well. The third one sold less, 'Catch As Catch Can'. Did you have difficulties going on at the time?
No, not at all. It is very hard to conclude whether you're successful or not. When you're successful, everyone knows it, but you never know it yourself.

During the last year it was silent around you. There were rumours that you had difficulties with your health. Is that right?
No, the only health problem I had was when I stopped smoking. It was silent because I left RAK Records and went to MCA.

How do you see your future?
I don't know for how long I can keep performing. I haven't thought about this yet. What really interests me is songwriting. I'd like to be better at it, write more songs. During a tour, I oly think about the performance before, during and after it. When I come into the hotel, I think about writing songs and music.

Do you want to tell your audience something with the songs you perform?
Only with the songs I write myself. Music has several roles. And I don't believe music always has to have a 'message'. Music makes people move, which is a wonderful thing, or makes people sit down and listen really carefully .When I sing songs that were written by Marty, I am the interpreter. I sing them in my own way. The people react very differently to music. Take five people and make them listen to 'Bridge over troubled water'. They will come with five different responses. That's the beauty of music, I think. As far as concerts are concerned: it's a cool thing, when so many people come together. The people seem so apart, during work or on the streets. It's great when they come together at a concert and have something in common.

You have a close-knit family. How important is that for you?
Very. The family offers me support during bad times. My mother takes care that money ends up in the right hands and not with certain types of managers. If there's anyone you can trust, it's your own mother. Ricky and Marty don't just write the songs for me, but also help out with the sound during concerts and so on.
We all have different lifestyles. Ricky lives somewhere and will soon get married, my parents and their chidlren live somewhere else. But they have something in common - and that's me. (laughs)

Was it hard for you to step out of the shadow of your father?
No. It never hindered me from making records or being successful. It is something different when you talk about the father-daughter relationship. Supposedly fathers spoil their daughters. Especially older journalists seem to think this. They think I'm daddy's little girl. It's their problem, not mine. For me, he's Marty.

Which leads to the next question: was it hard for you in the male dominated rock business?
Well, not as far as music, singing and writing are concerned. Marty and Ricky treat me as their equals, also during the tour. My opinion is respected as much as theirs. What did I want to say... (laughs) Oh yes, life in the male world. What irritates me most are photographers. They want to make you do certain things. That really bothers me, standing in front of the camera and having to act different from what I am. When they ask me to smile at the camera. They should ask male artists to smile. Always when they photograph girls, they have to smile. Men don't smile and girls have to smile.

Are you treated as a singer in the press, or just as "eye-catcher"?
The whole point of the press is selling newspapers. And that doesn't happen by writing about musical abilities, but about sex life, hair or clothing. The press is not interested in things that are about me. I accept that.

Something familiar comes to me in the sentens: first comes something different and second what that which you thought. How will this Kim Wilde present herself life, supported by Steve Byrd (guitar), Richard Blanshard (sax), Steve Stone (bass, keyboards) and Christopher North (drums). How will the performance be received by the many fans appearing?
And there's again a surprise: Kim Wilde and her band present a knotless rock-concert. Disregarding a few minor weaknesses, partly because of the song material (her new record is not her best), partly because of a failing live experience.
The men of the band are good musician, offer more than just middle of the road. Especially drummer Christopher North. Kim herself throws in all she's worth, sings. Her voice holds mostly. Only at the end the breath falls a bit short. But she is forgiven for that.

And also in other ways she has changed. From the quiet, introvert Kim the selfassured live performer has become. Overnight. Or on the way from the hotel. She presents herself in a sweatshirt, dresses in a leather top, a tight leather top. And looks like one knows her from the photographs after all. The hair raised up, different from yesterday in the hotel.

Musically, you can't expect miracles, but that which comes, arrives well. The applause levels at the new non-hits is lower than those for the known hit songs.

All of the pieces are played fast, almost heavy. "View from a bridge" almost twice as fast, like "Can you come over", "Kids in America". The atmosphere is good, and Kim is in good shape.

The static photo model grows up to full life during concerts. Kim rages, hops, sweats without regard for her outfit. Sympathetic. She appears at the keyboard once, briefly, but most of the times she is the frontwoman, without forgetting to interact with the band.

Kim Wilde has changed when compared to previous concerts. She offers a real rock concert. And perhaps some male audience members will look at one or another band member, although everyone has naturally come for Kim.

A pop star to "touch". Not an interpreter, who can't reproduce hits on stage, but a singer of flesh and blood. Endeavouring to give her best.

Kim Wilde is surely a phenomenon in pop music, but a human one. And a pop star, whose concerts are truly rewarding for those who go to them. 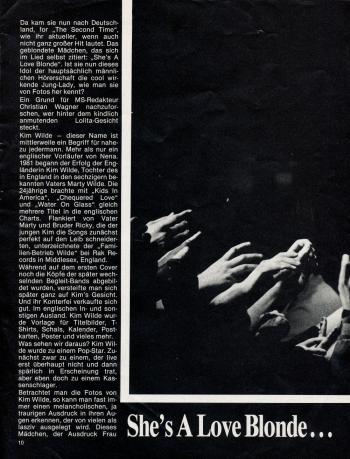 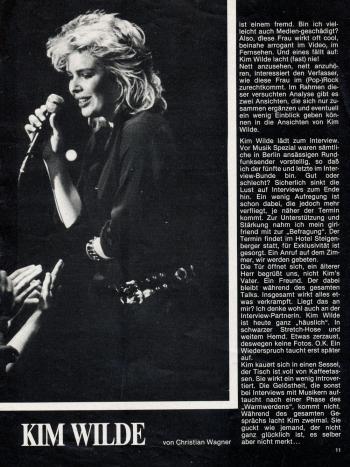 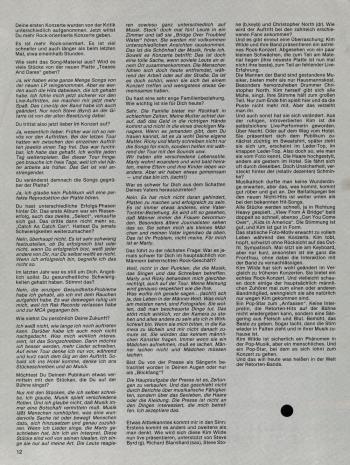