1. "I must admit I've been wearing some rather weird and wonderful designs on T.V. recently", laughed Kim Wilde when we spoke to her, "but I think when you appear on the television, you have to be very much larger than life! However, when I'm out socialising, I don't wear things that do so much damage to the eyeballs!"
Has Kim got fed up with the simpler jeans and jacket look she wore at the beginning of her career?
"Before I became a singer, I was an Art-school student, and my friends and I used to experiment with some pretty outrageous outfits and colour combinations. We'd phone up each other the night before and plan our colour schemes for the next day! I think though that you have to be in the right mood to wear certain clothes, and I often felt great in just a simple T-shirt and jeans, so I suppose it was just natural for me to carry that through when I started singing. It wasn't a planned image really, it was just what I liked to wear at the time. At the moment I suppose I'm getting interested in bolder colours, like this gypsy blouse, which is definitely one of my current faves!"

2. "Another thing people are always asking me about are these gloves," giggled Kim, "they were a birthday present from a good friend, so I can truthfully say, I have no idea where they came from, but I tell you one thing - they really do come in handy!" (Groan!)

3. "I really like diamante jewellery because it is cheap to buy and adds a bit of sparkle to your outfits. The brooch came from Miss Selfridge and I picked up the necklace at a funny little Market Stall at Camden Lock in London. I've always liked things that shine... I think in a previous life I must have been a magpie!"

4. "I also love men's waistcoats, in fact any men's clothes! When I was young I was a bit of a tomboy. I was always borrowing my father's and brother's clothes, much to their annoyance, but these days they make me go out and buy my own!"

5. "This leather jacket is absolutely the favourite item of clothing I possess. It is an old friend that's travelled all over the world with me. I picked it up at a flea-market in Carnaby Street for ?18. Once again, it's a man's jacket, but because it was such a small size, they couldn't sell it, hence the cheap price-tag!"

6. "I only possess two badges, but they are both very special to me. One is of Billy Fury, who was a great singer and a friend of my father. The other badge is of Elvis Costello. He's got a reputation for being very hard to get on with, although I found him to be very charming as well as being a great singer and song-writer.

"And finally my message to Jackie readers is to keep your peepers peeled, because you never know what bargain you may find... just around the corner." 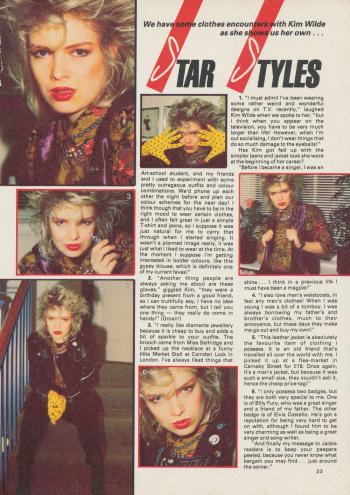