The saga of the Wildes

A new album, new label, new look, it's the return of Kim Wilde. Always faithful to the same working team (her father, Marty and her brother, Ricky), she started writing songs for the first time. An opportunity for Numeros 1 to tell you the saga of Wilde since her father's success in the Sixties, until the triumph of the daughter, Kim in the Eighties.

'I would like to have many kids and they are the most important elements of my life', Reg Smith (aka Marty Wilde, the father of Kim) would have said in 1957 at its first performance at the television in 6-5 special, a program produced by Jack Good, a show aimed at teenagers.
In fact, Marty Wilde tied as much or more importance to the career of his children as his own, although he was an idol of the Sixties.
Marty Wilde was born in Greenwich April 15, 1939 with a gift for music. At 18 he bought his first guitar (second hand). Three months later he is scheduled in various clubs in Soho. This 'teddy boy' is passionate about motorcycles, music, friends, the jukeboxes and bars. Coat, hair combed back, the Fifties look. In that 6-5 special Marty plays 'Oh boy' and 'Boy meets girl', surrounded by film clips with Jerry Lee Lewis, Little Richard and Elvis Presley of course, sequences that give the show a considerable aura in England and which led to Marty to start a real career.

Her father, the idol in England

It is on his slow, 'Endless Sleep' that most English girls would get a soft spot for the singer. He obtained the title of sex symbol in Britain, like the King in the U.S., which often preclude against him (with his group, the Wildcats) having his hits at times like 'Teenager in Love' or 'Donna'. To which he answered: 'Presley or Jerry Lee Lewis are also on their covers'
Later, he admired Cliff Richard with 'Move It', rock 'n roll made in England.
But from 1962, despite a much appreciated release of 'Lonely Avenue' originally by Ray Charles, the career of singer Marty comes to an end. His marriage to Joyce does not help matters: he loses his sex symbol image and the support of his admirers.
No matter: he went into the cinema and runs a few successful films but it never accepts the idea of leaving the world of showbusiness. He then composes for others: Sandie Shaw, Françoise Hardy and Status Quo (among others). In 1968 he participated in the festival Knokke-le-Zoute. In 1970 he recorded an album of Rock. Despite the shifting musical trends of the time, he continues to appear in shows, but Marty Wilde is no longer an idol, his career as a rock singer has been completed, he did what he could do and now he is alone facing the tidal wave of music that swept Europe. 'The rock' n roll ate me from the beginning. I hate to analyze the reasons. I think is not for rock. What I know: when I do not sing, I'm unhappy. " It only remained to perpetuate themselves through their children.
Rick Wilde, first, the brother of Kim, better known by the name of Ricky. At 16 he played guitar and worked in recording studios. Why was Ricky the cadet? Perhaps that is because he is a boy and that Marty can more easily invest in him. Kim isn't interested in it until later. Kim at 18 when she made her entry into show biz. His date of birth? On November 18, 1860 in Chiswick ...
Kim Wilde spent the first four years of his life in Watchfield Court, Chiswick and Blackheath.
In 1968, Wilde moved to Hertfordshire. This is where Kim spent a happy childhood, quiet and reasonably quiet. 'I was a teenager rather banal', but that did not stop it being a studious pupil. At the Primary Tewin she studied piano. Attracted by the drawing and painting classes she takes at Hertfordshire College of tand ar design in St. Albans. Dynasty Wilde became alarmed for the future of Kim. Yet it remains little man of virus, musicus populus asleep in a corner studio, waking up at the Miss tackles. She'd just turned 18 when, joining his brother in a studio, she asked him to participate in the choirs of the next meeting. . Ricky was well aware that his sister lived, he also said he fully trusted. For several months she became familiar with this 'other side' of show biz that she did not know. Ricky knew then he had to give him the chance to be the most unheard. Indeed, he worked with Mickie Most (the CEO of the RAK record label). For a sound recording, he spent a band or was engraved the voice of his sister. Mickie Most vibrations from head to toe did not stop to push buttons on the console, stop, review, play, stop, review, play ... From that moment, Ricky expects to issue Mickie Most, who decided on the field handle the 'small chorus'. Very quickly then released 'Kids in America'. Rcky writing the music and the lyrics Marty: a way to get back on stage through Kim.
5 weeks later Kim is number 1 in most European countries: the sage of Wilde took the road to glory.
For its first 33 laps 'Kim Wilde' will extract two successive 'Water on glass' and 'Chequered Love': an album full of love and insights facing a world where human relations are rather like 'tight' .
Three months later, 30 cm at the top of most charts in Europe. Then came his first tele: France, Joinville 81 or Kim, who died of fright abandons his orange juice for the traditional 'white wine country'. The French immediately adopt Kim. 1982, his second album 'Select' 10 titles, a neat accomplishment, a strong title, signed 'the Wild', 'Cambodia', which toured the world together - later - a clip. This album, besides 'Cambodia', the other two are from success, 'View From A Bridge' and 'Ego', all products specifically family.
Four months after the release of this disc, Kim receives a platinum disc for 'Select' and more than 20 million exeplaires sold worldwide since Kids in america. In 83, we always talk about Kim with a new single 'Come Away Child': 'I've always been convinced that I had to sing', admits she gently and end 83 she released her third album, 'Love blonde' . It becomes like his father a sex symbol, a glamorous girl: 'I wanted to evoke the glamorous side that every woman carries with it ...'

With 'Love blonde', we discover Kim in the absolute, in that she wanted to add sophistication to its songs from other albums by the eclecticism that prevails there, 'I developed a style that is me, that is not a style-mode. I do not just go with the times... My pleasure is to be myself'.
Nile Rogers mixing 'Dancing in the Dark' is trying to get this title on the American market (as she is not yet found there, except for the import shelves). Says Kim: 'They did not want to leave 'Cambodia' for political reasons... '
We saw her everywhere, she was heard everywhere. She was accustomed to success every 6 months, and then since 83, nothing.
She abandoned her record company EMI for WEA, WEA decided to ensure that following the saga of Wilde with a new album, 'The second time' and a clip. A comeback and Kim is back, blonde, fresher, more smiling again after an absence of nearly a year. His only public appearance, October 22, 1984, for the delivery of her gold disc at the Casino de Paris before an audience of professionals.
That said, she remains a family affair, but for the first time (for this 4th album), she adds lyrics and music.
Although surrounded by Gary Barnacle (sax), Mark Hayward Chaplin (bass), Steve Bird (guitar), Ricky (keyboard / bass). Kim, the lady of the rock is ready to resume the path of hits. The saga of Wilde is far from being completed as much as two babies just complete this family of musicians. Roxanne (born 1980) and Marty Junior (to 81). Where will this dynasty end? 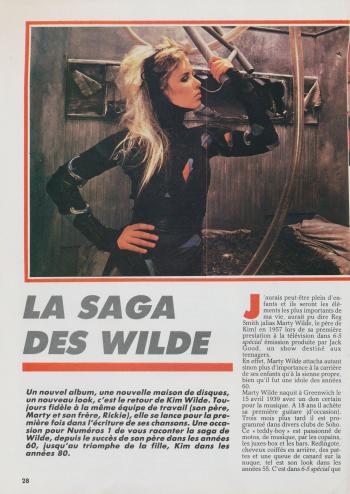 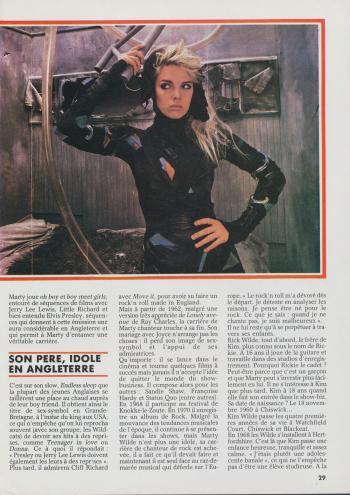 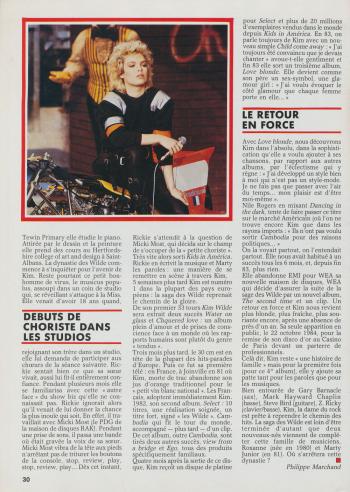