She looks wickedly sexy when she smiles and has a voluptuous pout - but never make the mistake of dismissing Kim Wilde as yet another dumb blonde singer.

She has just finished a successful European tour, where even she found her popularity strange but exciting. Now she plans to stay in her flat and work on some new songs.

"I have a two-bedroomed flat and one of them has been turned into a music room. It's filled with gadgets which I never thought I would get the hang of."

Kim's rocker roots have been handed on from her family - she even wears one of her dad's drape jackets in her stage act.It seems dad, ex-rock star Marty Wilde, has kept his own mini-museum of '50s and '60s fashions.

"There's a huge loft in the house full of old clothes. I discovered this red drape jacket there and pinched it. I love that sort of look."

She has finally abandoned her much-publicised "glamorous new image" and gone back to the kind of clothes she feels most comfortable wearing - jeans and trousers.

"For a while I was into the complete media package, the video, the clothes, the shoes, the whole hype. I soon lost interest, it's too time-consuming. You'd be surprised how many offers I've had to do make-up lines or hair products - even teen bras."

Kim has also had a steady relationship with her boyfriend for around two years, but says she definitely doesn't share her flat with anyone.

"I'm too selfish to share myself with anyone", she explains. "I like to have friends around me, but too much and I would never get any work done."

Can she really be that single-minded?

"I really don't go out that much partying at night. I drink mainly wine, or champagne, though that's not an extravagance - I get a lot duty-free! I watch twhat I eat and steer clear of junk food - though, when I'm touring that's not easy. I believe it's important to eat the right kind of foods."

"Usually I go out in really anonymous clothes and no one notices me."

Her bright blue drape jacket from Carnaby Street - yes, it still does a thriving trade - was hardly what you would call retiring. But it wouldn't have mattered if she'd worn an old sack - everybody's wild about Kim. 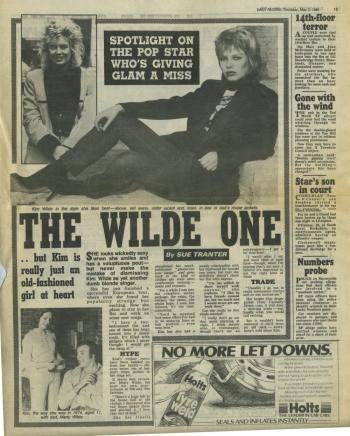