From the moment that she first burst on to the pop scene in 1981 with "Kids in America" Kim Wilde became a fashion figure on whom thousands of girls around the world modelled themselves. Her record company spent a fortune promoting the "Kim Wilde Look", distributing photographs, posters and videos to newspapers, magazines and TV stations worldwide. Everyone seemed to be going Wilde about Kim, but Kim herself didn't actually try very hard to look glamorous. You don't believe it? Read on!

1961 and Kim sets off for some filming and a couple of concert dates in South Africa. It was actually her pop star dad, Marty, who was filming and playing, of course! At this stage Kim hadn't quite developed her "Blonde Bombshell" image. She was more into woolly hats, blankets and nappies. Kim turned out to look really like her mum, though, didn't she?

By 1974, Kim had adopted the "T-shirt and jeans" look. Seen here with Kim is her younger brother, Ricky, her mum and her dad, who obviously preferred a bit more sparkle for his outfit. Kim now has another brother, Marty and a sister, Roxanne.

1981 saw Kim's first taste of success, but she became an international pin-up without really trying. She'd originally had her hair changed when she was a student, from its natural mousey brown colour to blonde, by a hairdresser. Not only did her new-look hairstyle cause her mum to have a fit, but it cost Kim £15 - which made a big hole in her savings from her Saturday job. As a student, Kim bought most of her clothes from jumble sales and market stalls and saw no reason to change when she started to appear on TV and on stage.

Spot the difference! About nine years on from the previous picture of them together, Kim and brother Ricky have changed dramatically. Although Kim's hair has become her trademark, Ricky doesn't seem to have quite as much as he used to.

Up to date Kim is now far more image conscious than when she started out in the music business. Her clothes tend to come more from expensive London boutiques than church jumble sales and she no longer insists on always doing her own hair. Kim even worked with leading London fashion stylists X-L on her space-age warrior look for "The Second Time" video. Some things never change, though, and Kim's still happy working with her dad and brother Ricky who write and produce material with her at their own studio beside Kim's dad's house in Hertfordshire. 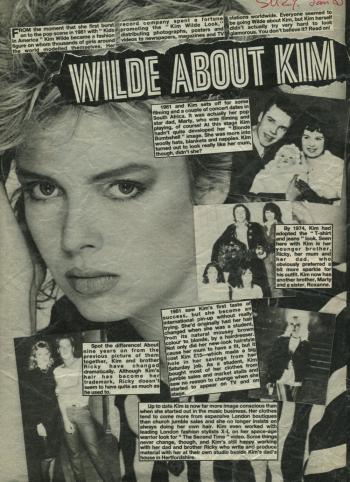