She has just finished her European tour the pretty Kim Wilde, triumphant tour as all those who were in the Zenith could see! Girls had the chance to meet her between two planes the day before her return to London!

Decidedly the bar of the hotel Warwick is the last show where we cause! At least we can meet all the foreign stars who honor our capital of their visit. The day we had an appointment with Kim Wilde, we met the Rolling Stones (Mick Jagger in the head), Al Jarreau and Howard Jones. Kim was not yet out of her room when I arrived, but her four musicians, Preston the drummer, Steve the guitar-keyboard, Richard the sax and John the bassist, were waiting for her in the bar before a cocktail of fruit juice. For some time, Kim refused any interview without her "boys". She believes that they are just as much part of her show as she, which is to her credit.

We chatted all five. I was dying to know what four boys, constantly touring with one of the prettiest girls of the world of spectacle thought of her... I even wanted to go a little farther and ask them if each of them would have married the beautiful Kim ... if indeed the opportunity presented itself of course!

I bowed to Preston first, handsome boy, his eyes sparkling with malice, wearing a soft felt, he burst out laughing!
"If I were to marry Kim, how would you like me to tell you why, if you saw her in the early morning, you would understand, she is part of this rare species of women as beautiful as they were in the evening. She has a fabulous sense of humor! "

I turned to Richard, a tall brown man of about thirty.
"Of course I would have liked to marry Kim, she's so balanced, easy to live with, no big head, she never plays the star, and has the same life as ours! The fact that she laughs when I tell a joke ... Only voila, I am already married for six years and I do not believe that my wife is very happy to learn that I want to marry my boss..."

Steve the guitarist was sleeping in his corner, obviously exhausted by the night before. I really had the impression to wake him with a start...
"It's a great idea, but it's already done ... almost ... By a fun occasional coincidence, I happen to be married to a girl I love, who is a singer and who is also called Kim, otherwise I would not have hesitated for a moment, I love the smart girls and I guarantee you that Miss Wilde has a good head!"

I turn to John the bass player. Little talkative that one.
"Yes, but it's impossible, I'm not really married ... but it's just like that!"

I was going to know a little more when Kim arrived, all black leather clothes as usual. She approaches each of her musicians to make them a kiss, far from suspecting that all four had just admitted that they would have dreamed of having her for wife!

After a short photo session, Kim is ready to play the interview game. Of herself she told me her joy of having turned in France and sung at the Zenith.
"In Paris, it was really fabulous, magnetic ... It happened a rare rare between the public and me ... in fact tonight it is perhaps the public that was the best! Has pushed to give the best of myself. "

And now what are your plans?
"I'm going to be at my home in London, but I do not think it's to rest, I have a monster job waiting for me, and in two years I start a tour of the UK, September I have to deliver a new album. As I plan to make a bigger contribution on the writing plan, you see that I have no time to lose! Fortunately I am now owner of a jewel Of recording studio in Knebworth, a village about fifty kilometers from London. In my opinion I have the best studio in all of England! "

The last time I saw you, you were upgrading your apartment. I guess now everything is done.
Kim hides her face in her hands.
"No, I have to say that as far as my apartment is concerned, it's a real drama, you realize that I have not yet found a way to put curtains on the windows! When I'm on tour I regularly go in front of shops or I see things I would love to buy to put in my house, especially antiquites but I do not do it because that me Would pose too many problems to bring everything back and install everything at home.This is one of my biggest regrets. But for now I devote myself entirely to my career, because I tell myself that I will have time later to take care of the rest!"

Is there no question of marriage?
"I will soon be married one day because I absolutely want to have children, but no one who makes me crave for life Asked me again my hand! "

We leave on a promise of Kim of very soon come back to Paris, sing for this public who made her the queen of rock. 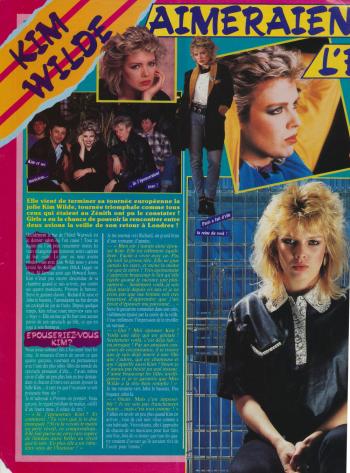