1. AIN'T NOBODY - Chaka Khan
A cracker! The whole 'Stomping at the Savoy' album's great, but this one just stands out - it's so classy.

2. FADE TO GREY - Visage
Came out at the same time as 'Kids in America' and brings back lots of lovely memories.

3. RECOVERY - Olivia Newton-John
It's from her 'Physical' album and it's great. She's got a lovely voice.

4. TRUST LP - Elvis Costello
I used to play a lot of his stuff all the time but this one is a special favourite.

5. SUBURBS OF MOSCOW - Kim Wilde
I know it's one of mine but I just love it! My dad (who wrote it) really got into Russian culture and I think a lot of that fascination was that he's really afraid of it.

1. SEARCHIN' - Hazell Dean
It just sounds like "let's make a high-energy song that's gonna be ultra, ultra commercial and let's put these really naff lyrics to it and get this really naff vocalist in..."

2. SUSANNA - The Art Company
I found this offensive from the first moment I heard it. I dunno why.

4. GHOSTBUSTERS - Ray Parker Jr.
It was all the rage when I was on holiday in New York and we went to see it at the cinema. The film was okay but then they launched into this song and the audience we joining in "GHOST-BUSTERS!!" I just felt like strangling 'em.

5. SOME GUYS HAVE ALL THE LUCK - Rod Stewart
Ugh. 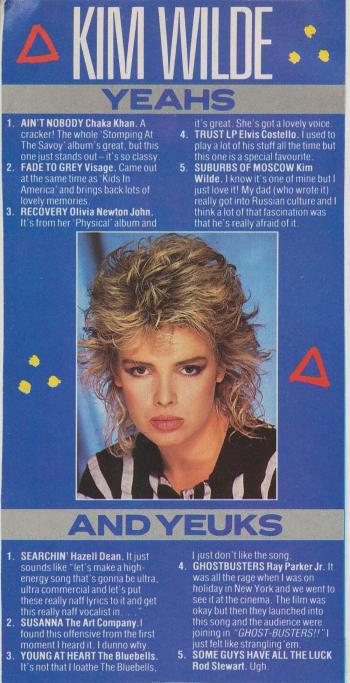