"Another step" is the title of Kim Wilde's new LP. An appropriate title, because the English pop singer sees this piece of studio work as a next step to the top, which still seems far away after all these years. The change of employer two years ago, she left RAK Records and signed on to the more LP-oriented MCA label, didn't help much so far. A disco version of the old Supremes hit "You Keep me Hangin' on" has to make the consumer enthusiastic for the LP.

The writer of this article wants to make jokes - usually at the cost of women - about the correlation between the size of breasts and the success in the Top 40. But the success of a photomodel like Samantha Fox is in no way related to her talent. As a singer, that is. And Kim Wilde, heaven knows how much we always praised her - has, after a hopeful start some years ago, ended up on a sideroad. Granted, she is no Aretha Franklin, not even a Madonna, but a caricature like Fox she should be able to leave behind her. In the first evening broadcast of Tineke we could see how good it looked and how nice it sounds. And conclude that her disastrous appearance in the Kuip of July 12 was really a mistake. Does she lie awake of that stupidity in Rotterdam?
Kim: "I don't like being reminded of that. What misery. And it could have been so great, appearing in front of 50.000 people."

Why weren't you singing live?
I was singing with a recorded tape, because there wasn't a lot of time to rehearse. Well, that turned out bad. I could cry. But I can't dwell on that forever. Everyone has a disappointment in their life every once in a while. This time it was my turn...

Two years ago you were very enthusiastic about leaving RAK Records, the singles label, and going to MCA, which is more album oriented. But neither your singles nor your albums have sold since then.
MCA didn't demand incredible results at once. I can prove myself in the long run. I want to develop as an albums artists, and that takes time.

Madonna will also have such ambitions, but she scores hits meanwhile.
You are comparing me with a phenomenon, that comes by once in a decade. I don't have that kind of impact. I would like to end up in the top 10 with every record, but I can't. Maybe you can tell me why. Everyone in the band and behind the scenes works really hard. I can't force the public to buy my records. In Germany and France my records sell really well, by the way.

What moved you to record an old Supremes-hit?
There are a few songs on the album which I think could be singles. We thought we might try with an old song first. Phil Collins had a hit with 'You can't hurry love' recently. And with the possibility of a breakthrough in America the choice of 'Hangin' on' doesn't seem at all bad.

Why didn't you hire Phil Collins as your producer? On the American market the producer is often more important than the artist.
Who knows. A producer could give my career a push, but I want to feel strong enough to continue without a famous producer afterwards as well. I feel that you have to await your turn when it comes to America anyway. All attention is to singers like Madonna, Whitney, Janet Jackson, Tina Turner and others there. It is hard to get between them. Janet needed three albums to break through. There's been a lot of investment in that girl.

Still it has to frustrate you that you aren't taken seriousy in England after a good start. And the jokes about your father and brother who write your songs and do the production duties.
The critique is very inconsequential and not really painful. My father and brother were responsible for the hits that I scored in the beginning. When the hits weren't there anymore they couldn't do anything right. Nonsense, of course.

You are selling albums in Germany and Norway and play live in small halls. Would you prefer doing something else?
I go on as long as I like it. It's a cliche but it's as simple as that. I could always find a millionaire and marry him.

Another possibility: a breakthrough in America. You have to tour continuously, get disoriented, turn to drugs to stay on your feet and end up like Marilyn Monroe, used up and thrown away.
What do you think of this version: I get famous in America, tour once a year, rest in Miami Beach for six months, meet Don Johnson and get addicted to hamburgers. That sound a lot more fun... 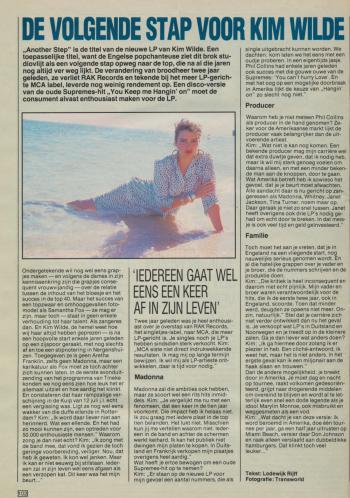 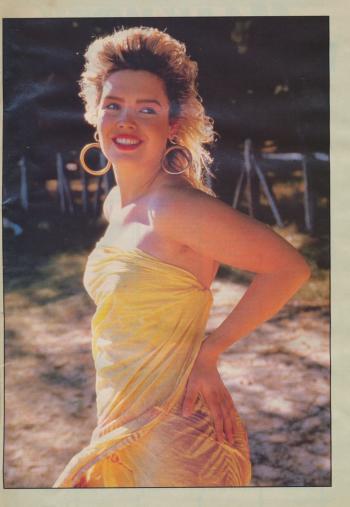 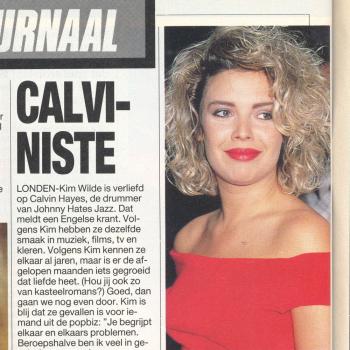