Kim Wilde looks as romantically beautiful as ever.. all marshmallow lips and huge little-girl-lost eyes. Every head still turns as she glides into the fashionable London restaurant where we are meeting for lunch.

But Kim's much tougher than she was in the days of hits like 'Kids in America' and 'Chequered love'. After her career took a dip, she's now determined to climb back to the big time with her new single, 'You keep me hangin' on'. So determined that she won't let anything, not even love, stand in her way.

Kim freely admits that her new grittiness owes much to her encounter with the bizarre EST mind-bending cult. She and her mother paid 200 pounds each to go on the course, which consisted of two weekends being abused and tormented. People on the course were not even allowed to leave the room to visit a lavatory or eat.

EST - it stands for Erhard Seminars Training - has been widely criticized for using classic brainwashing techniques and for profiting from people's unhappiness. Kim, though, says: 'Some very interesting things happened with people describing things in their lives and owning up to things they had done. I got really caught up in it all because I get caught up in everything I do. It was good for me. It helped me to overcome some of my fears.'

But she adds: 'There were things that really frightened me about EST. It made me realise how groups of people can easily be manipulated by one man who is very bossy and positive. I'm still very unsure about the money the organisers are making out of people with problems.'

Nevertheless, Kim says the course helped to give her so much confidence that she no longer needs a steady man in her life. "I need to be free to do whatever I want to do and I think men generally want to pin women down', she says. 'I don't feel the need to be in love with one person or anything like that. I think I have been in love a few times and it was quite delightful - but being in love doesn't fit into a schedule. It is terribly time-consuming.

'I'm 25 now and I'm very sensible, you see. I think Sensible should be my middle name. Marriage or having a relationship takes a lot of your time and I guess I'm just too selfish to give that commitment. I want to spend time on my career and I just haven't got time for a man.'

All that doesn't stop Kim dreaming about her ideal man, however. "And he comes out looking a lot like Christopher Lambert, the French actor', she giggles. 'I've never met him but I happen to know that he is single. And there is something about French men. They have great accents for a start.'

Fortunately for Kim, the French seem to love her every bit as much as she loves them. When the big hits petered out for her in Britain three years ago, she carried right on earning a small fortune playing sellout concert tours on the other side of the Channel. One area of Kim's life which poses her no worries is money. Under the canny guidance of her father, Fifties rock 'n' roller Marty Wilde, she has earned more than $2 million. And it's all been invested in a highly successful recording studio called Solid State, at Knebworth in Hertfordshire. 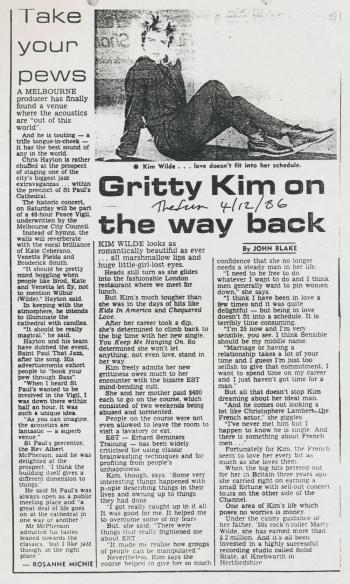