Kim Wilde is still a hot name in Denmark ­ even though her star has fallen in a lot of other places. A shame, as Kim loves to feel the warm vibrations from the audience. This and a lot of other sweet secrets in this Vi Unge interview.

She was the European queen of teen music in 1981. 'Kids in America', 'Chequered love' and 'Cambodia' did sell more than 5 million copies together, Kim Wilde was eye candy in her videos, she was young, fresh, sexy and unspoilt.
"Today I can see that I was used, maybe even abused", she says. "I was a lolita rock goddess, naughty and unreachable at the same time. I guess it was a choice that I got promoted like that. The other day I overheard by incident a discussion between some people from a record company about how they should promote Samantha Fox. 'Just exploit her breasts as much as possible', one of them said to the other, 'it works'. I guess I was an example of how pretty and sex was used to sell records. Of course I don't feel abused for real. I did also make lots of money by the way and I have invested a great deal of that in a recording studio. In the 5 years I have learned what I want, and what I don't want. Now I want to get accepted as a songwriter and rock singer. That's why I don't tour in the UK, they still see me as a teen-magnet, I just can't seem to get rid of that image."

Kim is very happy with the continental Europe, she feels at home in Scandinavia, like she does in Germany and France.
"I love to be loved, so maybe I should move to Denmark", she jokes. She would prefer moving to France though. "That's my favourite country. I love the language, the culture, the houses, the people, the fashion and the weather. It's not many weeks ago I returned from a holiday in France with some girlfriends. These old girlfriends of mine are very important to me. Music is good and I spend almost 24 hours a day with it, but me and my girlfriends never discuss music, only what girls normally talk about, maybe mostly, men, food and sex."
"One or more kids? Yes I want to become a mother, just not right now, I don't think I'm ready to give up music for motherhood. It must be something I do beside my music career. Right now I have no plans concerning that."

Kim Wilde has written a lot of the songs on the new album 'Another step', then why choose the only cover version as the first single?
It's not my decision, it's the record company. I didn't want it on the album in the first place, it was brother Rickys idea. I know the old Supremes version but didn't want to listen to it before we made our own version in the studio. I don't like the version made by Vanilla Fudge at all. There are other songs on the album I feel will become stronger singles later. We had 8 songs more that couldn't be on the album, one or two may appear as bonus material on the cassette and compact disc."

Is there something in the world you are afraid of?
There is a lot. War. Nuclear war. Maybe the increasing pollution is the worst fear of them all. That is a big problem and the reason I have performed for free for Greenpeace in the UK. They have my full support. I have some ethical rules I try to live by. You can't blame the world for being a pigsty if you are doing just the same yourself. I take care what I eat, the other day I was at my parents house. They have two afterthoughts, I have a sister that is 7 and a brother who's 5. My mother had the freezer full of Ice-cream which they love. When I read the declaration on the ice-cream I threw it all away, even though my mother was a bit angry. There was nothing but synthetic material in it. I always read the declaration when I shop. When the supermarkets are getting better and better to take home quality products, we have to turn down the bad quality products I think.
Another thing I really take distance from is drugs. I have just appeared on a charity single, where a lot of British pop stars are singing against drugs. Many of my best friends have been addicted to the crap, I myself have never been tempted. I have tried to smoke grass at social events to tell the truth. I don't anymore, I rather have a glass of red wine.
I have never and will never be a TV-addict. The only thing I see regularly is the news. I hated it when I was a child and now it's all that I see regularly. I sometimes watch Dynasty, it is a bit addictive in its own perverted way.
I have no doubt that the increase in numbers of cable and satellite TV stations will give the music business even better opportunities. The music will easier go from country to country. Hopefully it won't be only the US and the UK music industry dominating the market, I actually think they will realise that there is just as interesting music in other countries and not just down their own alley. 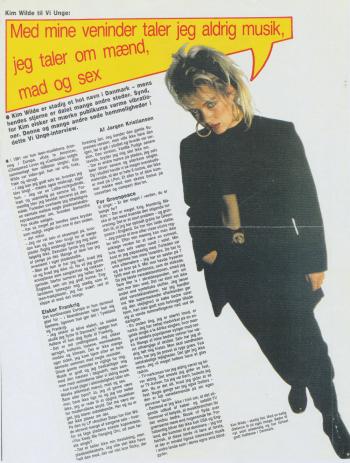 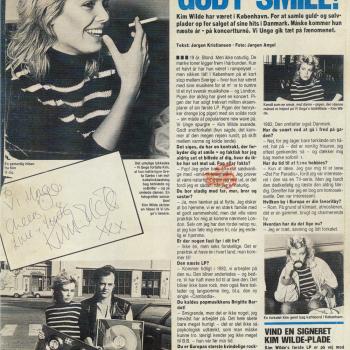 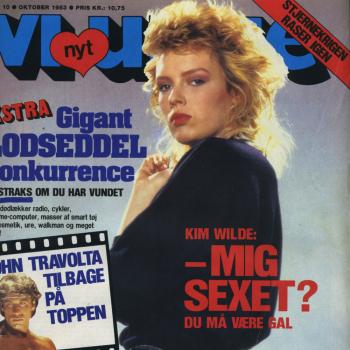