Kim has become a little more chubby and has a new hobby: video. When she came with to Munich with her comeback-single 'Schoolgirl', the ultra modern 8mm video camera was always there - even Popcorn-writer Georg Seitz had to serve as an object for filming (photo). Some more news: Kim has split from her boyfriend Gary Barnacle and lives alone now. She is working on her next album, that will be released in September. For October a tour around Europe is planned. A tip for all who go to France: a record with the title 'Les nuits sans Kim Wilde' (Nights without Kim Wilde) is out, on which a singer called Laurent Voulzy describes his nightly fantasies about Kim. In the end a female voice says 'don't take it so hard' in French - and that is Kim Wilde herself. "I thought the idea was funny, even when the rest of the lyrics can be considered ambiguous..." 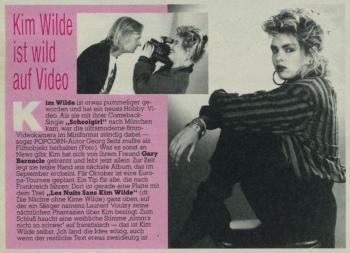