The black-leather clad audience in the smokey hall bayed its approval. Kim Wilde was in town, bringing the house down, yet again for the Continentals who can't get enough of her punchy rock singing.

High above the beat of the music, the blinding lights and the cigarette fumes of the Metropol, another "audience" was quietly appreciating the 26-year-old's success. The family -the Wilde Dynasty- were on hand to savour her 90-minute show. Father Marty, the Fifties heart-throb, cast a watchful eye over Kim's performnace, as mother Joyce scribbled copious notes for future discussion. Beside them, on a private balcony, Kim's sister Roxanne, seven, and brother Marty, five, soaked up the atmosphere as potential successors to a remarkable family tradition.

For Marty Snr and oldest son Ricky co-write and produce Kim's records, and Joyce provides the business brain. Kim's survival and success after five very tough years in the pop world has fulfilled her and her father. She says: "I'm tougher than I've ever been before. I have my parents to thank for their support and guidance, but nowadays I have the confidence to disagree with what they may say about how I'm running my career."

Marty says: "It's only now I can go and watch Kim's gigs. I used to suffer terribly from hypertension before she went on stage. I'd build myself up with worry because I was so anxious that nothing would go wrong. I suppose I was trying to protect her. But she's a capable lady now... she can cope pretty well on her own."

Kim - who begins a British tour tomorrow - left the family home in Hertfordshire three years ago and bought herself a flat in London. "It was part of growing up", she said. "I needed space to be by myself and to concentrate on my songwriting. Now I'm happiest when I'm with my friends."

Looking back Kim - who hit No. 2 in the singles charts with You Keep me Hanging On - remembers disliking the fame that came from being Marty's daughter. "As I grew up I did everything I could to make sure I wasn't noticed. I'd dress in a way that made sure I didn't stand out in a crowd."

Today, unmistakably beautiful in black, her trademark, she enjoys her own fame. "When I get audiences like the one in Berlin, clamouring for autographs outside the stage door, I know they are there because of me and my music - and not because of whose daughter I am."

And as she says it, she smiles over at Roxanne and young Marty. "I want them to be involved in my career, because we're going to be with each other for the rest of our lives. You can't just tell someone you love them - you have to physically show them. That's part of why they're here - to show them they are as much a part of what I do as the band, the record company, and the photographers." 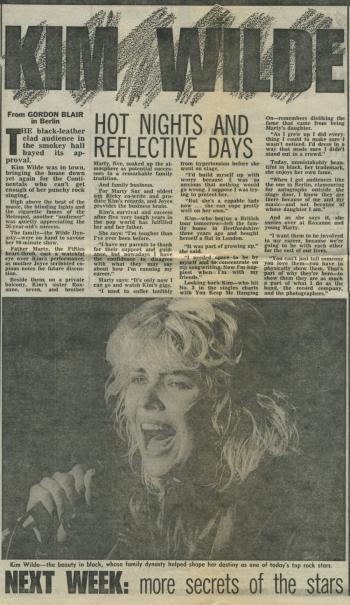 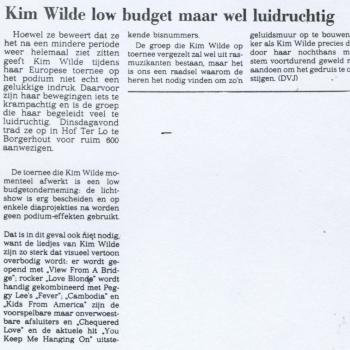 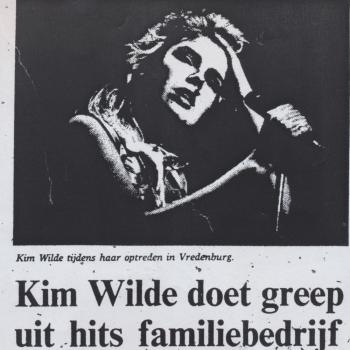 Kim Wilde plays the hits from the family business 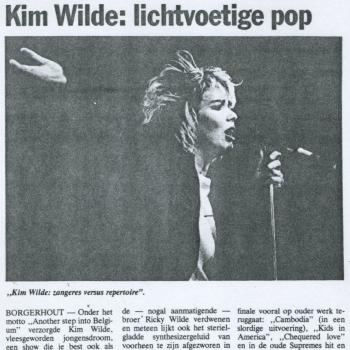 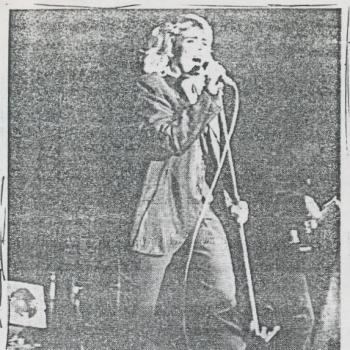 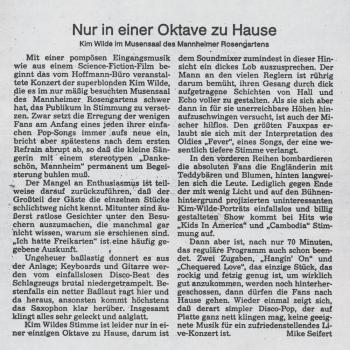 Only at home in one octave