The title says it, Kim Wilde thinks her new LP is more or less a comeback. With the single 'Schoolgirl' she already made a step towards a new direction a few months ago. Various producers, amongst others her brother Ricki, and furthermore Reinhold Heil, Richard James Burgess and the trio Rod Temperton, Dick Rudolph and Bruce Swedien (the trio that produced Kim's song 'Say you really want me' from the movie 'Running scared') recorded the album in the Wilde family's own studio in Knebworth. The a-side of 'Another step' contains mostly up-tempo, disco-oriented pieces (amongst which a modern version of the Holland-Dozier-Holland-composition 'You keep me hangin' on'). The b-side however shows the more sensitive side of Kim, and the atmospheric ballad 'She hasn't got time for you' is maybe the most beautiful song Kim has ever recorded. 'Another Step' is a mature step in the right direction. Compliments Kim! 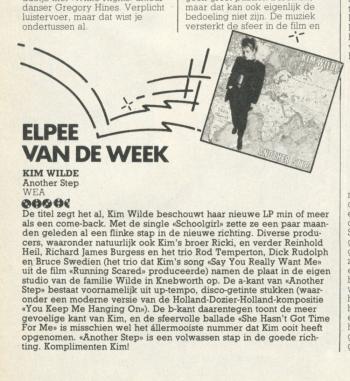