The challenge of Kim Wilde

Beautiful, thin, fit, British singer Kim Wilde marks her return to the forefront of the scene with a new album 'Another step' and a 45 'You Keep Me Hanging On'. She answered questions from our reporter Cécile Tesseyre.

What have you done during the past year?
The past year has been very hard for me. It has been really difficult... Say that the music changes, the groups are very numerous and often rather good, these days, and it is not at all clear to remain competitive. You have to be even better than they are (laughs)... I do not want to disappear. So I worked hard on this new album, I took time to prepare, write and record. Finally, a whole year has passed ... There's a song on the album that has been chosen to appear on the soundtrack of an American film 'Running Scared'. The title was produced by a German and did pretty well in the United States.

What are the things that have changed in your life?
I left home three years ago and it has developed in me a new sense of music (note: we remember that Kim often collaborated with his father Marty Wilde, a former idol of the sixties). Other people have started working with me, guitarist Steve Bird for example, and little by little I'm facing outward.

Your little brother Rick is nevertheless omnipresent on your album.
My 'little brother' as you say (laughs) is someone full of talent whom I respect enormously. That is why his contribution to the LP is so important. This system applies to everyone. If people are sweet and good, I am delighted to work with them.

I saw the credits on the album that you had written songs, which is a first I believe! Why wait so long before you started?
Writing was a thing that I always wanted to do since the beginning. But my career started fairly quickly and I have not had time to devote myself to it. Then I totally lost confidence in myself and I felt completely unable to write a song correctly. Finally, I decided (pushed by others) and I discovered that I loved to write! On the LP, I also played keyboards on some of the tracks...

It is because of all these changes you have your album entitled 'Another step'?
In a sense, yes. Not only have I worked on that part of the concept and its realization, but I'm also interested in other aspects, like the cover, the studies related to marketing artists. It was very fun and, well, I had the imperssion to take my career a bit more in hand.

'Another step' has been recorded in the United States. How have you lived there?
I was all alone in Los Angeles and it was very good (laughs)! I really loved the United States. It's a real shock that I felt by going to Los Angeles. This city is completely unreal (???). I do not think I could live there ... We were in a very large studio, and we've met nice people ... In Los Angeles, I took the opportunity to see many concerts: Prince, Sheila E, James Brown and all-star films! The food in Los Angeles is really strange, a lot of hamburgers! There is only one thing I did not like the 'smog', the thick smoke that hangs over the city. It's terrifying, and in addition, it is particularly dirty. The American mentality is also very unusual for us Europeans, but do not generalize. Finally, the sun is down throughout the year.

The single from 'Another step', 'You keep me hangin' on ', is a cover of an old song. At the moment, many artists are recording cover versions. Is it a fad, or are there no more good original songs anymore?
I do believe that this wave of covers is indeed a fad. But people like to replay old songs put to a new sauce. Studio techniques are very different from those of the past and it's always interesting to apply them to old titles. Obviously, the times should not become a fad, but to say that today was, it no longer writes good songs, no! On my album, there is only one cover.

Curiously, it is in your country that it works least well for you.
True, I have a lot of success in continental Europe and especially in France and Denmark. It is a phenomenon that I find hard to understand. I gradually detached from England. After the tour, I'd come and live in Paris. I have many friends and I can share another culture.

What other forms of art do you like?
The painting above all, I have many artist friends.

How do you do to relax?
I have some 'hobby': photography, drawing. In fact, when I stop, I do simple things... You know, the pressure is such that in general ná more strength to do anything...

Do you have any ambitions?
Of course! I would write more songs, continue to rotate. One day, too, have children... But I do not plan in advance... I let them come...

Who are your friends?
People I have known for a long time, or unemployed, in painting, in a bank, or in showbusiness. My best friend is a nurse, she takes care of seriously injured after car crashes...

What do you do with your girlfriends?
We have fun a lot, we tell our stories, our boyfriends, boys and lots of stuff in general! (Laughs)

How can a young man seduce you?
He should be intelligent and he has a sense of humor. Whatever happens to attierr my attention with a smile and unhurried have a chance (laughs) ... 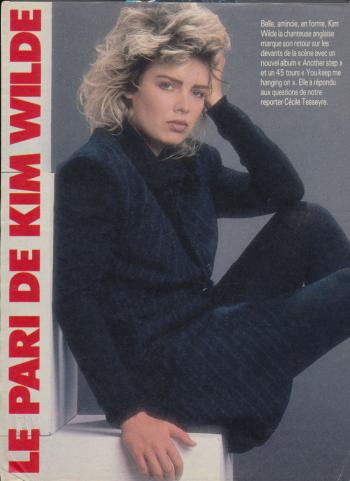 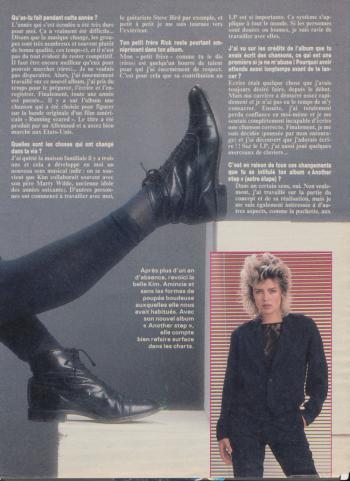 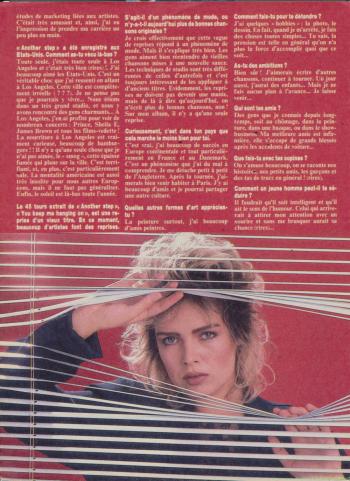