This is the new Kim Wilde: independent, resolute and looking for adventure

Kim Wilde seeks adventure! The once so shy, careless student of the art academy who spontaneously sang the songs written by dad Marty and brother Rickie to the highest regions of the European charts, is no longer the model teenager of old. She had her own studio built, writes her own songs from now on, and leaves on her own to Paris where she wants to live for a while. More resolute than ever blonde Kim is working on a gigantic come-back. In the Countdown-studios in Bussum we spoke to her about La Jolie France, her ambitions and of course the new single 'Schoolgirl'.

She has left the science fiction image, long blonde mane and Barbarella suits, coupled to the hit of last year, 'The second time'. "Those unreal images forced by record company bosses bore me so quickly", she says drinking from a glass of red wine in her dressing room in the TV-studio. "For now I'll stick to the second hand coats, pulled together by a friend from art college. I want to come across as natural as possible".
Since her debut single from 1980, 'Kids in America', a lot has changed. Kim discovered the synthesizer last year, started composing and records her records in the Wilde family studio in Knebworth. "I am a real DIY person now", she says. "And I can't imagine having no creative input and singing songs written by others all the time. On my previous album 'Teases And Dares' I jumped in the water, as it were, by putting two songs of my own on it. Now I can't be stopped and my new album, to be in shops in September, will contain many more songs written by me."

The studio, the song publisher and management was an idea of Kim's mum. "She is the boss in our family enterprise", Kim confesses. "You have no idea what she arranges and I admire her for her business insights. I don't care about money myself and I am careful about how I spend my money. Mum got the idea of investing the proceeds from the hits in a studio. That way I can make really good demos. We are working on the albums for eight months now and the demos are really complete recordings."
Some big names have already recorded at the studio as well, Adam Ant and Dexy's Midnight Runners for instance. "It would be great if my favourite singer Paul Young would use our studio as well, I might be able to convince him to record one of my own songs. That would be my big dream."
Besides her own lp Kim can also be heard on the soundtrack of the motion picture "Running Scared", to be in our cinemas this autumn.
"Suddenly I got a phonecall of top producer Rod Temperton, you know him from the Commodores. He needed a singer for a disco song on the movie and the boss of my American record company suggested me. So I flew to L.A. to sing a great song from the composer of the Pointer Sisters' "Automatic". I was surprised to get the opportunity because the song is so good, that the biggest American singer would also have recorded it. But they chose me and that's not just a big honour. I think Ican break through in the US with it. Everyone there is very enthusiastic all of a sudden."

Before she starts on a European tour this autumn, "touring is great fun and the best way to keep fit" says Kim, she will go on holiday to Paris. What is she going to do there? A holiday?
"No", says Kim, "To be honest I was planning to live there for a while on my own. A French singer, Laurent Voulzy has recorded a song about me. A tfirst I was very sceptical about it, because the French are not known for their great pop songs. But when Laurent came by in our studio, I began to become ever more enthusiastic. It was a great record! So I sang in the song and played in his video. Laurent has become a really good friend and we have made an appointment to switch apartments this summer. He'll take my house and I'll take his in Paris. It seems like a dream because I love everything about France. What would give a creative soul more inspiration than walking along the Champs Elysees?

Kim seems happy on TV, she is just as serious in her daily life. Her fear for the future is apparent in the song 'Schoolgirl'. "The song is about my six year old sister, Roxanne", says Kim. "I wrote it after the Chernobyl disaster. I was so scared by that. I thought about Roxanne's future and felt so guilty all of a sudden. I shape this world just as much as anyone else, don't I? And that's why I feel just as responsible for the disaster in the nuclear plant as Gorbachev would be. Sometimes you have to look into a mirror. When I finished the lyric of "Schoolgirl" I threw my arms around Roxanne and said sorry. I do think there is still hope, I am a born optimist. 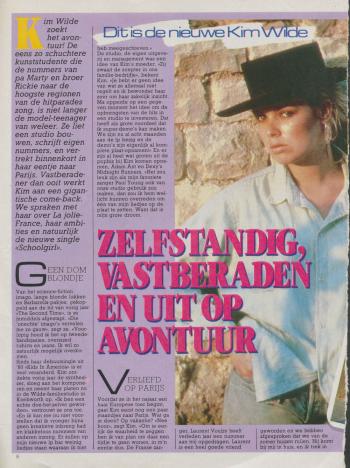