After being 'out of the picture' for a while she's back with the single "Schoolgirl" and in the autumn with her fifth LP. A title for that product she couldn't tell us during the interview, but she's toying with the idea "The Blonde".

You have gotten more involved with writing songs yourself since the album "Teases and Dares". When did you discover your talent as a composer?
Talent might be overstating it... I was toying with the idea for a long time, but I was always too unsure to really try. It was a sort of fear. I was afraid to conclude that I couldn't do it and I wanted to protect myself from a disappointment. Last year I was listening to a radio one afternoon and after I heard a few pop tunes I thought 'I can do that!'. I called my guitarist Steve and we got on it with a four track recorder. On my new album, which is released later this year, there are a few of those songs. It's a new phase in my career. One I'm really pleased with.

Does this signal the end of the Wilde team?
No, not really. I've always worked with pleasure with my father Marty and my brother Ricki. Ricky, who by the way is negotiating a deal with Nena to produce her new album, has retired a little lately. Married and a child on the way, you know. I think the only difference between now and the old days is the bigger creative input from me. I want to get involved in the production process as well.

A few years ago you didn't seem to be a very independent artist who wanted to be involved in all parts of the craft. A development?
Partly. By nature I am a very independent type. I think most people get a very wrong idea of who you are by your image. I have been involved with the craft since 'Kids' but I never demanded any credit for that. Hence maybe the image of a beautiful girl who sings the songs of dad and brother. I have chosen to change that picture consciously. Because I've gotten older, wiser and more selfaware.

That image of yours...
Er, a sex kitten. It has always bothered me. Building an image is part of the craft. I can't get out of tat. I only think it's a shame that it tends to overtake everything. You see a lot of people go under because of it. Look at a singer like Hazel O'Connor, who has left the stage totally because of the mayhem around her. I have found during these five years I've been in the business that the image I had didn't fit me. Unlike Blondie in the old days and Madonna now, who fit it like a glove. I am not like that and I only want to show the real Kim Wilde from now on.

When can we see Kim Wilde live in the Netherlands?
Soon, because in autumn I will tour in Europe. With a very rock oriented show. I have recently seen Sheila E in Los Angeles. Very impressive...

Will we see Kim Wilde on the big screen soon as well?
Who knows! I am thinking about it lately. It would have to be a French film, a 'film noir', because I love that genre.

You have recently recorded a song for a movie soundtrack.
Yes, a song for the American movie 'Running Scared'. I liked doing that. Especially because Michael McDonald sings a song on that record as well and because I got to work with Quincy Jones's engineers. An offer you can't refuse, isn't it? Insiders have high expectations. Maybe even a breakthrough in the US.

An exciting future ahead. A little time for holiday beforehand?
Yes, when I have my album ready. Before I start my tour I will recharge the batteries in my favourite country, France. A French singer who I'm friends with wanted to live in London for a while. We have decided to swap houses for a while, so I will live in Paris. Seems wonderful... 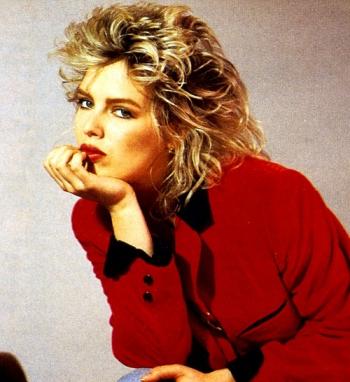