The Wilde one is back! Kim Wilde, at no. 6 with her single You Keep Me Hanging On, has a new album, Another Step, out this week. She's grown up, but still hasn't found the man to share her life. Here she exclusively reveals her feelings about men, marriage and love to Craig MacKenzie.

You haven't had a permanent man in your life for several months, what's the problem?
I don't like having men around cramping my style. There is no room in my life for a lover right now. I want to concentrate on just being free - a person who does as she pleases. There is no man, because quite simply I am very choosy. I am not engaged an not about to be. I like living on my own. It means that if I get in late, no one can ask me where I've been. It will be some time before I think about sharing my flat. I don't think I'd like it.

Who would be your dream lover?
He would have the wit of comic Ben Elton, the looks of actor Christopher Lambert and... er, the body of Monsieur Lambert as well. He's delicious. I don't go for goodlooking men. There's plenty of them in this business, but there are not a lot of them around with brains - and that's what I look for in any lover. He's also got to make me laugh and have a big kind heart. Humour is very important to me.

It's your 26th birthday this month, would you like to marry soon?
No. I really don't like the idea of marriage. It doesn't appeal to me just now. One day yes, but just now, no thanks. True, my parents are happily married, and my married friends are too, but my single girlfriends are just as happy. We go out in big groups and have lots of fun. Men come and go. We use and abuse them. I think it's selfish if you marry someone just for security and it's not a real love thing. For me, that's what marriage is all about. A lot of marriages are based on people's selfish needs which is why so many break up. That isn't going to happen to me.

Would you like to have children?
I won't be having children for at least four years, probably longer. After all, my mother had two children in her late thirties. I dote on my little brother and sister. I suppose I treat them as my surrogate children in a way. But I don't come on like a mum to them. I want to be a fun person for them.

Everyone remembers their first crush. What was yours?
It was a little boy of seven. He didn't like me much, in fact he had a crush on someone else in the class. I used to leer at him from a distance. That's my style, you know. I had another crush when I was a teenager. He used to play at our house. It was very sweet and I was madly in love with him. Then one day I looked at him and he wasn't wonderful anymore.

AIDS is a terrifying disease. What are your feelings about it.
I don't look at men any differently because of the problem, but it frightens me greatly and horrifies me that children are now being born with the disease. It's an appalling issue. I watch everything I can about AIDS. I read everything I can. It's the 1986 version of the plague. I don't think it matters where it came from. It's tremendously sad.
The most important thing is for people to be told all about it. It will cut down casual affairs. It's a personal choice if you have more than one lover. But everyone is paranoid about it, including women. It can infect anyone.

You've been a sex symbol ever since your first hit Kids In America back in February '81 - how do you feel today?
I'm not flattered by being called a sex symbol. It's fun for my career, but I don't take it seriously. When someone says, 'Cor, I fancy Kim Wilde', they're usually sitting next to their girlfriends whom they love. I don't take it as a big compliment because there's a lot more to me than having a good figure.

What do you think of Madonna?
I'm a great fan. I love her records, her music, everything about her. She has a great personality, looks glamorous, is intelligent and writes her own songs. Yes, you can say I'm a fan all right.

It's been four years since you've had a major chart hit, did you ever doubt you'd reach the top again?
Yes. Everyone does in this business. You can't always be number one. But I never got to the point where I wanted to give up. If I was never a success again it wouldn't worry me. Right now I'm thrilled to have made it into the charts and I'm just enjoying it.

Do you think of yourself as rich?
I'm not incredibly stinking rich. I am financially independent, but I still have to pay the bills. I never got into this business for the money and I wouldn't stay in it for money. I love music and that's it.

Some newspapers (not The Sun) have reported that you are hounded by crazy fans, is this true?
No. I've read those stories too. I don't have people lurking in the bushes outside my flat, waiting to pounce - there aren't any. They'd have a problem hiding - I only have one tree. I don't have people pestering me either, I don't have bodyguards. I once had problems a few years ago, but that was abroad. I couldn't bear to be shadowed by anyone. I had bodyguards when I first started touring and it drove me nuts. There is always a kind of violence associated with having these people around, it brings on violent people.

Have you any ambitions left?
I would like to write a song that went to number one.

Do you hate anybody?
I think it would drain me to hate anyone. Being nice to people costs you nothing. I love every square inch of me and like to love everyone else. The most important lesson I've learned is not to judge anyone. It's too easy to slag people off.

What's your most treasured possession?
It's got to be my record collection. It takes up almost one room and I've been colecting albums for 10 years. The first I bought was Gary Glitter's greatest hits.

You used to have a weight problem. How do you keep so slim?
I haven't a clue. I don't find my weight a problem anymore. I seem to have outgrown the time when it caused problems for me. I don't do any exercise at all and I don't smoke. I usually end up eating snacks all day. I like going out to eat with friends but I never have extraordinary amounts of food.

Have you got any hobbies?
I like photography, and since July I've gone potty with my new video camera. I've documented things on film which will never be seen by the fans, like how I recorded my album in the studio, doing a TV show abroad and life in the dressing room. I'm doing it because I'd love to have seen Dad in his heyday. It's a personal This Is Your Life I'll have in 20 years time. 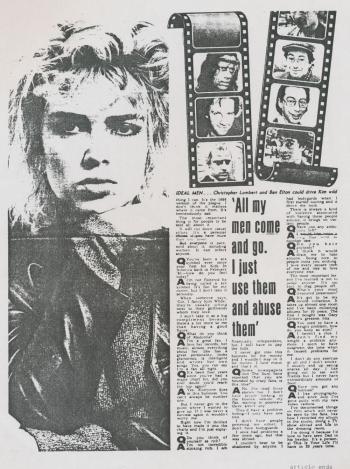